The notion of equality has and continues to be a controversial social ideal. How does one measure it? How will it be imposed? Especially as we’re talking about an idea stating that all humans are equal in fundamental worth or moral status, yet we continue to reject such values, whether on purpose or inadvertently.

One such example can be seen in the treatment of LGBTQ+ people, the stigma continuing to permeate modern-day societies. As Pride Month begins today, June 1, we are reminded of the fight against condemnation, dehumanization and bigotry against our own kind. Two of these people who we’ll be speaking of today, are not only fighting for LGBTQ+ rights, but also fighting Russian soldiers in the Russo-Ukrainian war.

This article will touch upon the history of homophobia, both socially and within the army, as well as looking into the experiences of those who’ve come out as gay when it wasn’t yet fully accepted. Let’s dive into it! 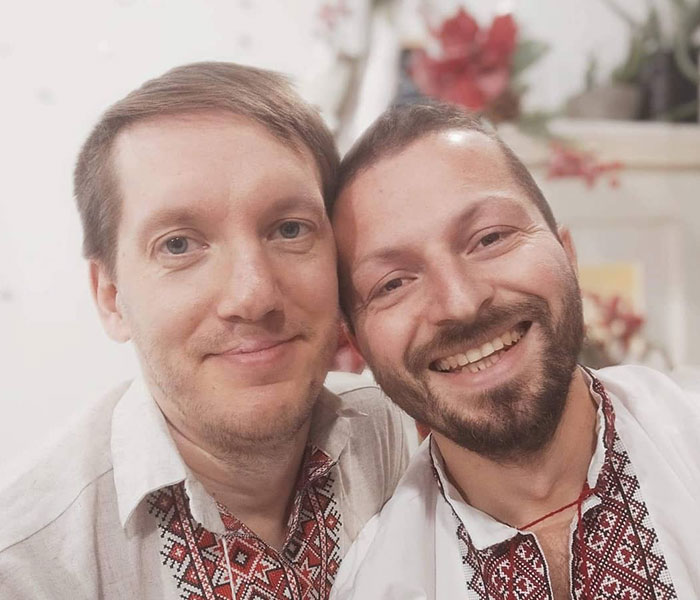 Oleksandr Zhuhan and Antonina Romanova met through their theater work after the latter moved to the capital, Kyiv, from Crimea in 2014, as Russian forces invaded and subsequently annexed the Crimean Peninsula from Ukraine.

The two hit it off and had been enjoying their lives together when the tragic Russo-Ukrainian war began February 24.

The pair had no former training or military experience, however, they joined the frontline with other fellow Ukrainians 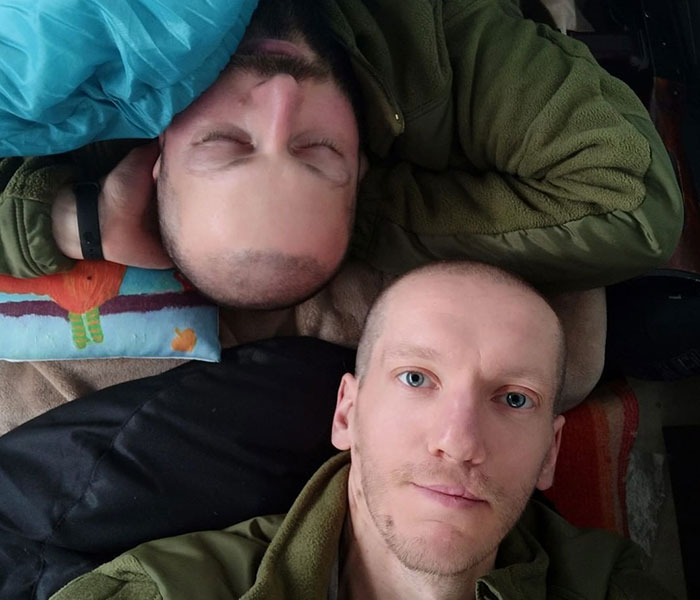 Neither of them was trained in the use of weapons or had served in the army previously, yet after a couple of days hiding in their bathroom, they were faced with few choices.

“I just remember that at a certain point it became obvious that we only had three options: either hide in a bomb shelter, run away and escape, or join the Territorial Defense [volunteers]. We chose the third option,” Antonina told Reuters.

Being an LGBTQ+ couple, with Antonina identifying as non-binary, with pronouns she/her, they were worried whether other soldiers would accept them 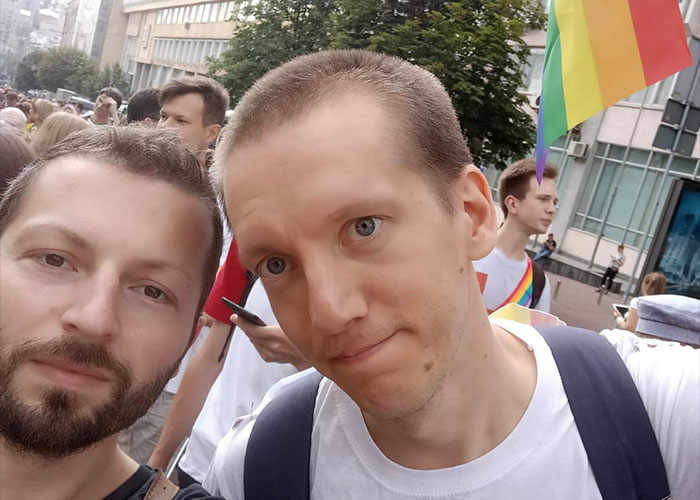 After some essential training, they were sent on their first tour of duty around Mykolaiv in southern Ukraine, about 135km (80 miles) from the port of Odessa. It changed their lives.

The pair fought in the same unit and found it terrifying, with Oleksandr contracting pneumonia in the process. But, the couple rejoiced in the fact that their fellow fighters accepted them.

“There was no aggression, no bullying,” Antonina said, explaining that the others found it a little unusual. The warrior identifies as non-binary with she/her pronouns, “but, over time, people started calling me Antonina, some even used my she pronoun,” Romanova said. 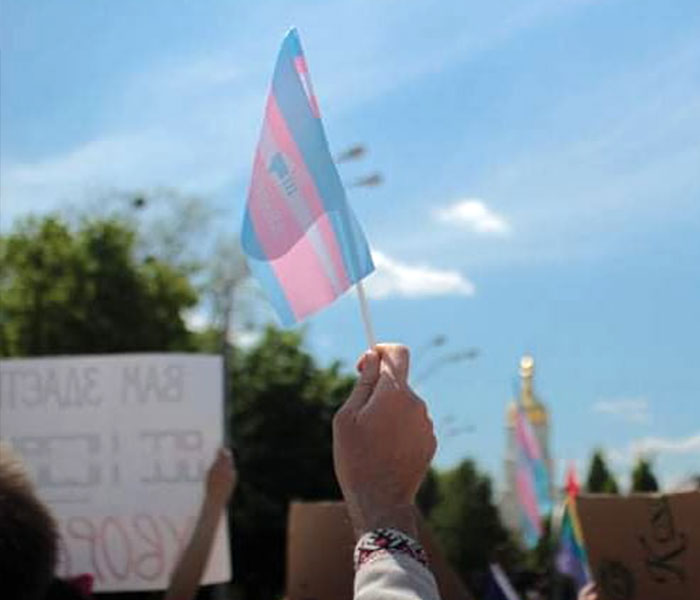 However, they had few options: hide in a bomb shelter, run away, or join the Territorial Defense volunteers. They chose to fight 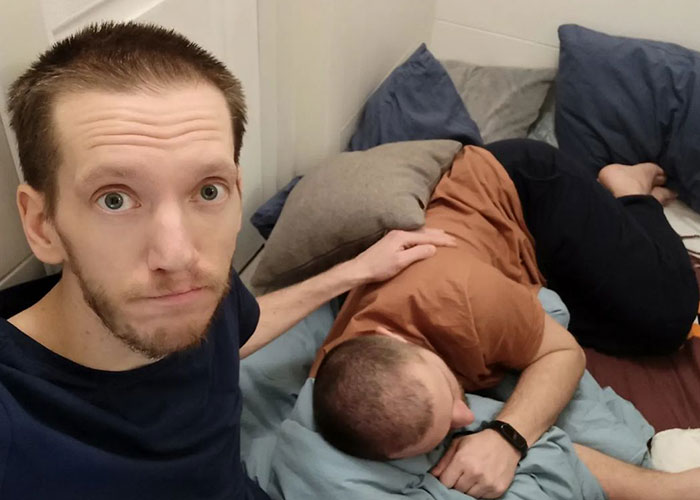 There was much back-slapping as they joined their new unit at Kyiv’s central station for a second three-month stint. They were familiar with some of the soldiers in their team, yet the commanders had changed, which caused a bit of concern for the pair. “I know that in some units, the rules are more strict,” one explained.

Oleksandr’s unease lifted as one commander made it clear that he would not tolerate homophobia within the unit. Another more senior officer explained that the only important thing on the front line is to be a good fighter, regardless of anything else. 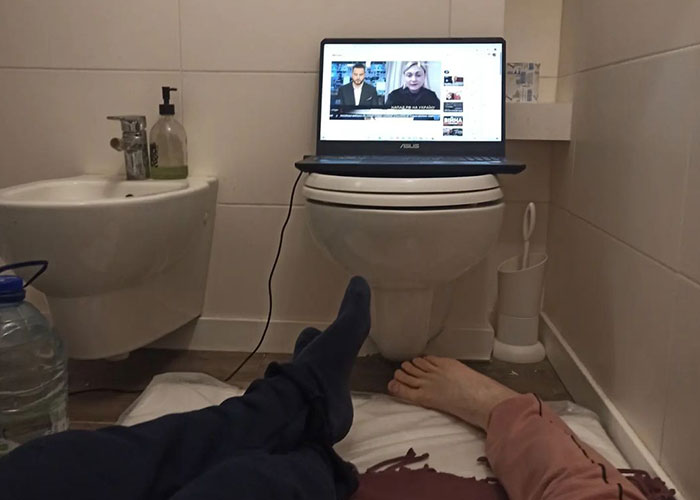 The first tour of duty was a terrifying experience, yet the comradery with other soldiers, who accepted the couple like any other, made it easier to go through 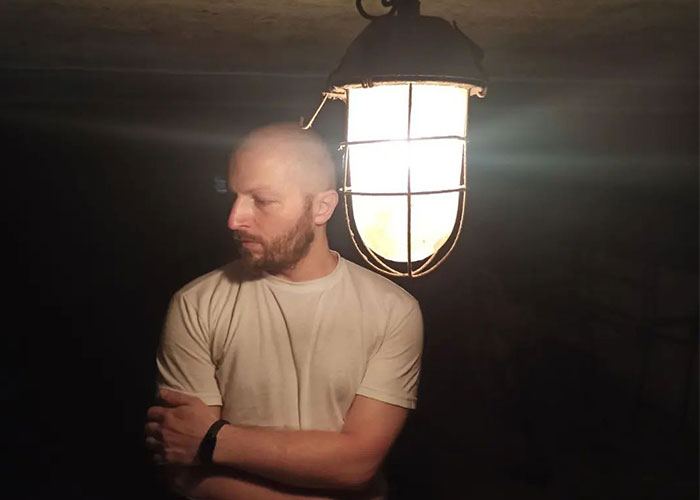 For Zhuhan and Romanova, their service brings them an added sense of responsibility, not only for themselves and their people, but the essence of what it means to be Ukrainian. “Because what Russia does is they don’t just take our territories and kill our people. They want to destroy our culture and… we can’t allow this to happen,” Oleksandr said.

Despite their spirit, one fear remains present. “The thing I’m worried about is that in case I get killed during this war, they won’t allow Antonina to bury me the way I want to be buried,” Oleksandr said. “They’d rather let my mum bury me with the priest reading silly prayers… But I am an atheist and I don’t want that.”

A senior commander stated that the only important thing on the front line is to be a good fighter, regardless of anything else 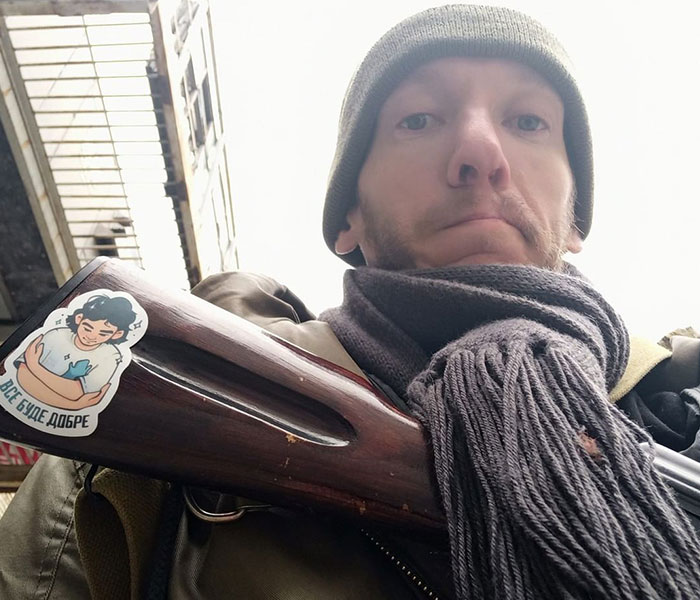 The two volunteers now wear an embroidered unicorn badge proudly on their arms, giving their uniforms a special distinction. The unicorn is a symbol of their status as members of the LGBTQ+ community.

These members, after signing up for the army, have taken to sewing the image of the mythical creature onto their standard uniforms, just below the national flag. However, this isn’t a new practice. It dates back to 2014, at the very beginning of Ukraine’s conflict with Russia, the event that made Antonina leave her home.

“Lots of people said there are no gay people in the army,” Oleksandr said, whist he and Antonina were preparing to leave for their second three-month combat rotation. “So [the LGBTQ+ community] chose the unicorn because it is like a fantastic ‘non-existent’ creature.”

Now the pair, along with other LGBTQ+ soldiers, wear an embroidered unicorn badge on their uniform to fight beliefs that there are no LGBTQ+ soldiers in the army 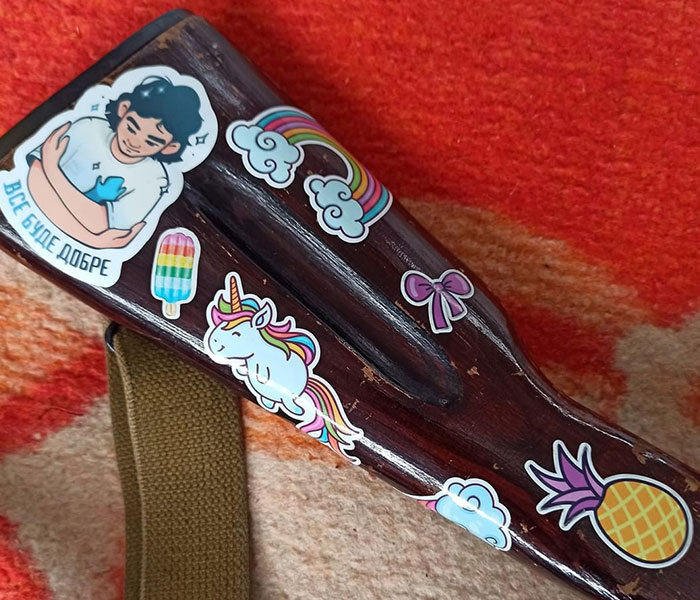 “Lots of people said there are no gay people in the army,” Oleksandr explained. “So we chose the unicorn because it is like a fantastic ‘non-existent’ creature” 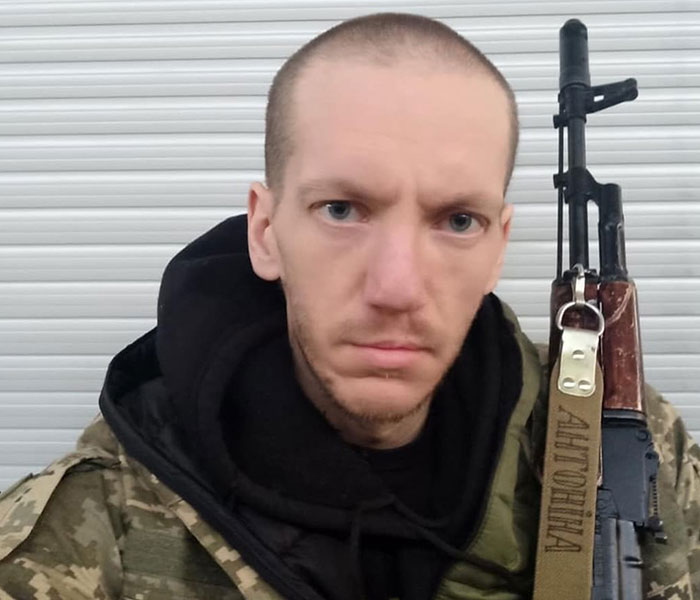 To understand such beliefs, we must look at the wider context. According to the Library of Congress, Lesbian, Gay, Bisexual, Transgender and Queer (LGBTQ) Pride Month is currently celebrated each year in the month of June to honor the 1969 Stonewall Uprising in Manhattan, which was a tipping point for the movement in the United States.

Attracting millions of participants around the world, the Pride Month events unite reflection and celebration. It aims to honor and remember those who have been lost to hate crimes, and to recognize the impact that members have had on history locally, nationally, and internationally.

The main reason, however, is to advocate for equality, dignity, and visibility for all LGBTQ+ members in the face of homophobia. Maurianne Adams, in the book Teaching for Diversity and Social Justice, explains that homophobia is a range of negative attitudes and feelings towards people who identify or are perceived as being lesbian, gay, bisexual or transgender, resulting in critical and hostile behavior such as discrimination and violence on the basis of sexual orientations that are non-heterosexual.

Their service has made them feel like they have the responsibility to protect not only their people, but their culture as well 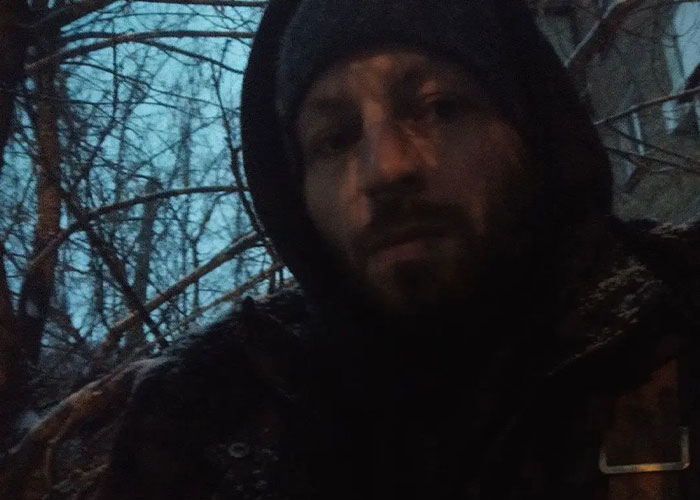 The discrimination and prejudice continues into professional sectors and the army is no exception. Whitney Elizabeth O’Connell noted that the history of homosexual oppression in the military can be traced back as far as the late 1700s.

In the 1940s, many military psychologists tied homosexuality to mental illness, thus using it as a cause for exclusion of the LGBTQ+ community from service by labeling them mentally unfit to fight.

Despite continued administrative oppression, many commanders recognized the fallacy; dedicated, hardworking service members were to be seen as detrimental to the mission based on their sexual orientation alone.

Since 2010, when the controversial ‘Don’t Ask, Don’t Tell’ policy was repealed, US citizens have been able to serve openly without fear of legal persecution, yet legal penalties and social stigma are two different beasts to fight.

Despite their spirit, one fear remains present: “In case I get killed during this war, they won’t allow Antonina to bury me the way I want to be buried” 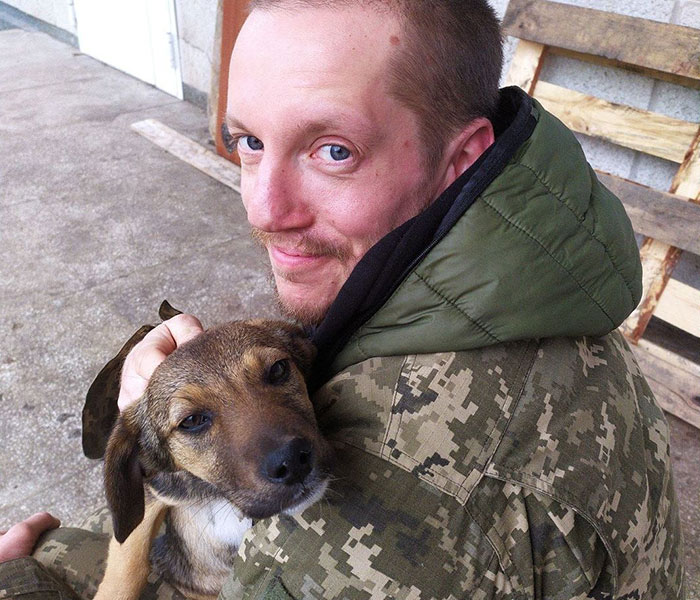 In the summer of 2018, Viktor Pylypenko became the first Ukrainian soldier to publicly declare his homosexuality. “It was scary of course, like stepping into the unknown,” he said, as reported by DW. After coming out, he felt empowered to approach dozens of LGBTQ+ active-duty soldiers and veterans, which then formed an advocacy group for LGBTQ service people in 2019.

“In some units, they may talk about LGBTQ rights in the military on their smoke break,” Pylypenko said. “Afterwards, somebody will Google our group and get in touch.”

One such person was Serhiy Afanasiev, a 23-year-old special forces soldier, who’d recently come out. He said he was relieved that he no longer had to live a double life: “I have a good commander. He told me it’s my life and he has no right to get involved. I serve well, and that is enough for him.” 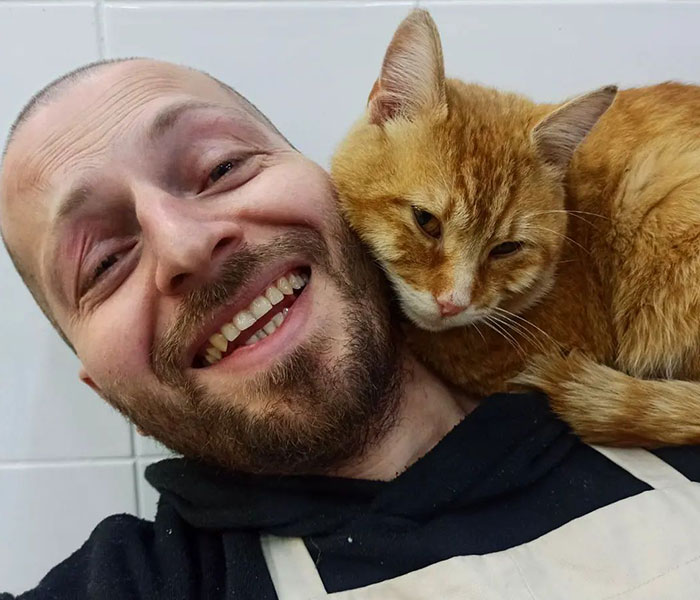 Ukrainian law does not treat the partners of LGBTQ members of the military as it does the spouses and children of heterosexual soldiers wounded or killed in combat. “When a gay or lesbian soldier dies,” Viktor explained, “their family is essentially cut off.”

There are several legislative proposals for civil partnerships, yet none of them has made it to the parliament for debate. “Give us equality,” said Pylypenko. “We have sworn loyalty to the Ukrainian people. We have bled for our country. We have earned the right to equality.” 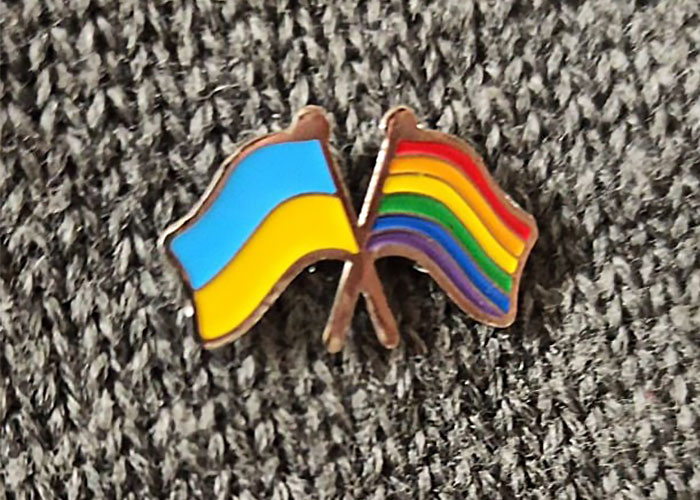 As the war continues and people anticipate its conclusion, a story like this reminds us that we’re all human. With our own lives, our own fears, and sexual orientation and identity shouldn’t divide us.

We hope that Oleksandr and Antonina stay safe among hundreds of other soldiers fighting for their home, people, and culture.

Leave us your thoughts in the comments and I shall hope to see you in the next one!

The post Ukrainian Couple Are Fighting The Homophobic Belief That ‘There Are No Gay People In The Army’ By Joining Their Defense Force first appeared on Bored Panda.