It’s no secret that tensions run high ahead of a wedding. Every bride and groom wants to remember the occasion as the happiest day of their lives, and it’s entirely up to them to make the decisions that best reflect their values. But the pressure for everything to be perfect tends to spark drama, create conflict, and incite unstaged emotions. Heck, it can even turn the event into a real-life reality show that’s bound to divide the whole family.

One woman has recently turned to Reddit to share an incident she had with her brother’s fianceé, Tanya, and ask for advice on what happened. As the 25-year-old detailed in her AITA confession, she found herself at odds with her sister-in-law because she refused to “gift” her Instagram handle — and now both she and her husband may face unexpected consequences for it.

The situation quickly escalated into a negotiation, a follower count comparison, and an ultimatum that put a strain on the two couples’ relationship. Now the confused woman wonders if she was right to stand her ground, hoping to get unbiased opinions from the community. Scroll down through the whole story below, and be sure to share what you think of the whole ordeal in the comments! 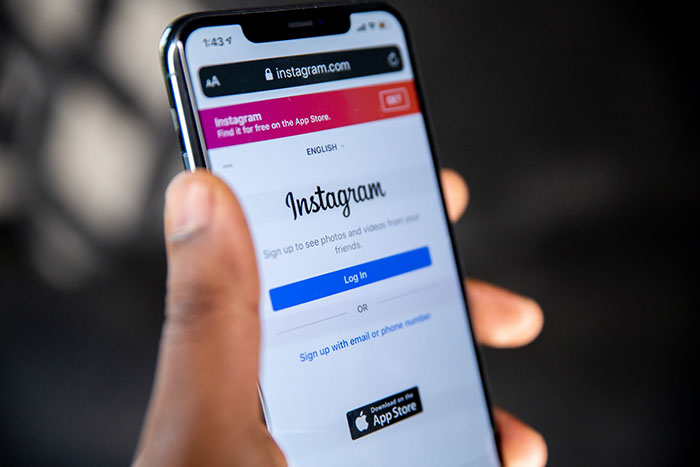 Now she’s wondering whether she went too far 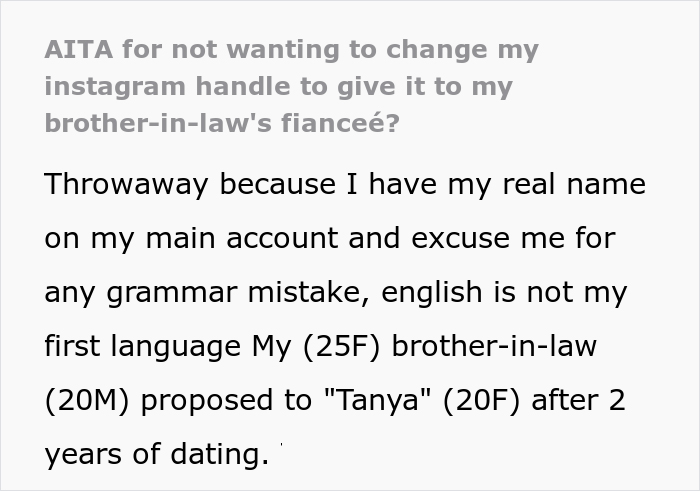 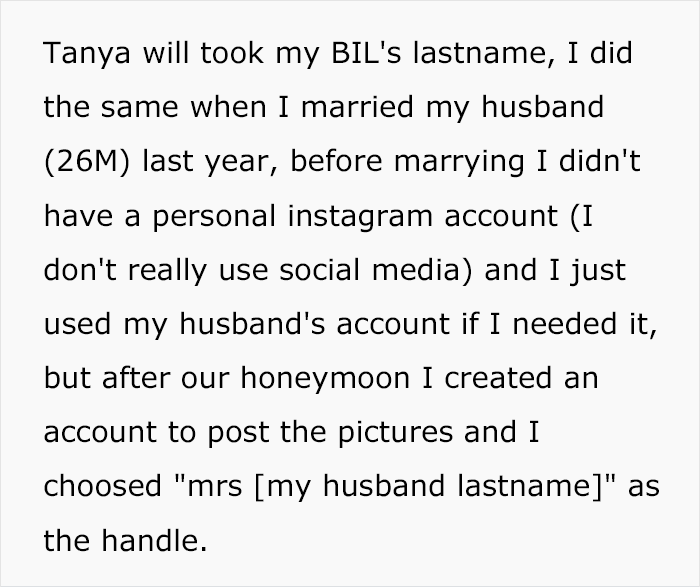 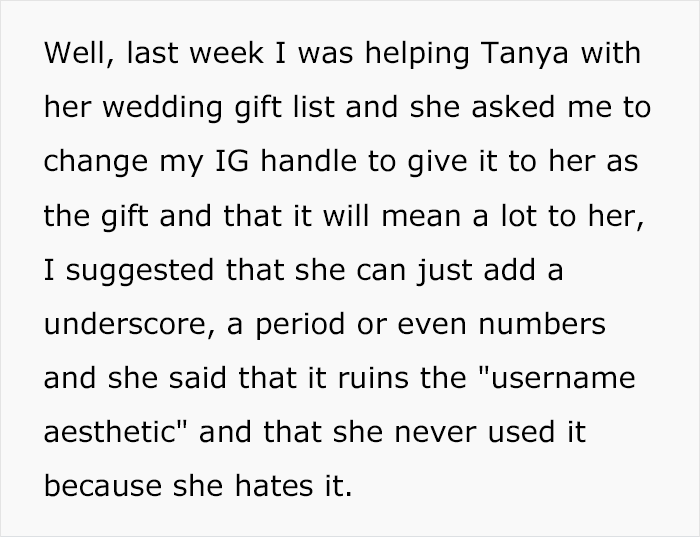 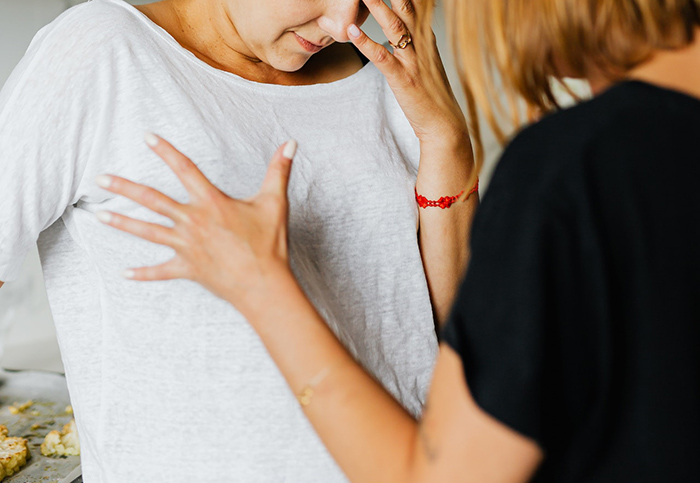 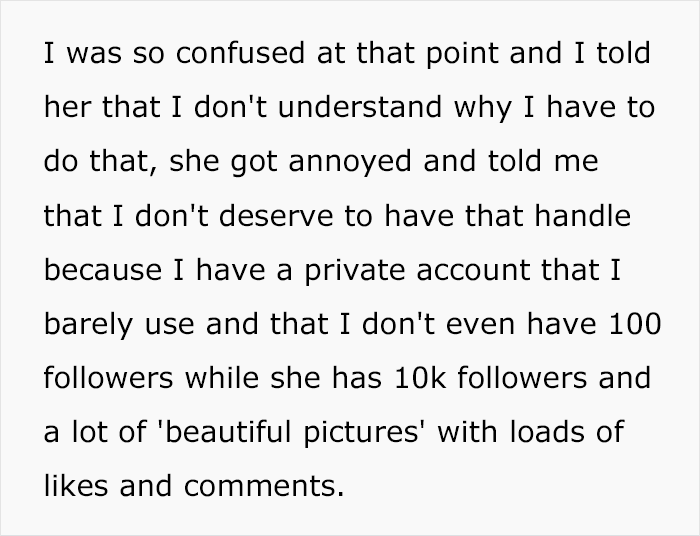 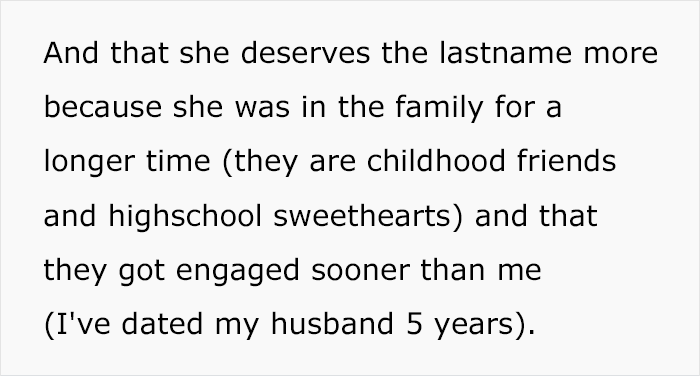 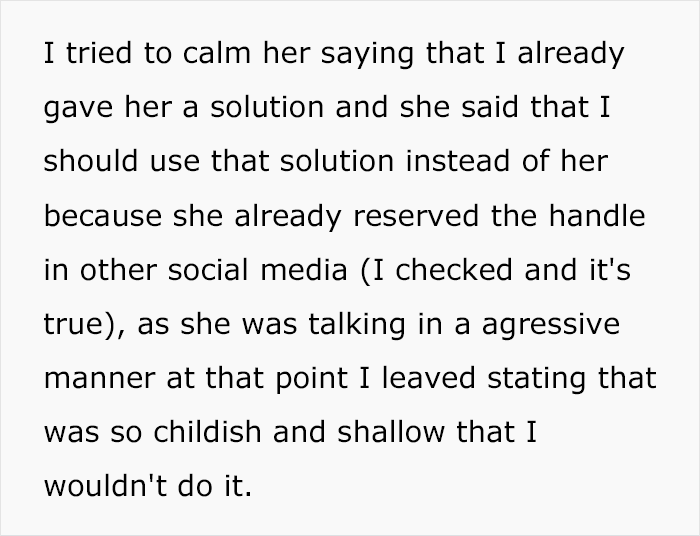 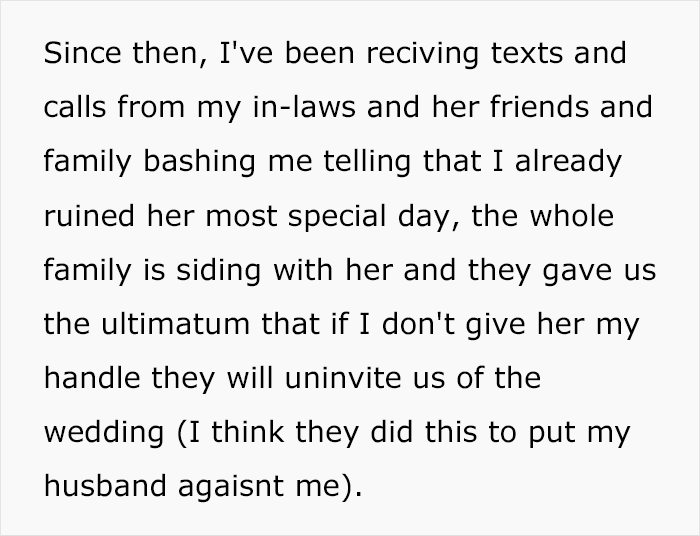 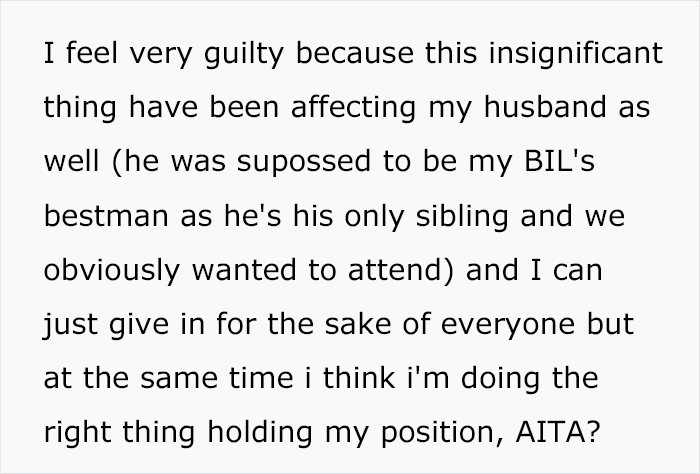 Among the many items newlyweds put on the wedding registry, Instagram handles are not at the top of the list. In fact, they shouldn’t be there at all. But it’s hardly a news flash that even the smallest hiccups can turn brides into bridezillas who make everyone’s lives overly complicated. Weddings are notorious for bringing out the worst in people, after all, but it doesn’t give people the right to play with others’ feelings, not to mention treat them like pawns in their little games.

The majority of readers agreed that the woman is right to stand her ground and keep the username, calling out the SIL and her manipulative behaviors. But she still felt guilty that such a small thing turned into a major issue that ruined the mood and strained the relationships between family members.

To gain insight on how to handle these situations and find a healthy way out of conflict, we reached out to Eileen Head, a transformational coach who aims to help people to shift their mindset and release old beliefs, blocks, and patterns to create the love they desire. “With families and relationships, they are never rational,” she told Bored Panda.

Conflicts between family members are inevitable because what makes sense to one person makes no sense to the other. “This situation is further fuelled by an immature and young bride who is upping the dynamics by demanding it as a wedding gift and the ultimate manipulation of uninviting them to the wedding….over an Instagram handle!”

“When someone wants something and is not getting it in other ways, they sometimes use what I call the Deadly Sin of Justification. Justification in any situation keeps people in the right/wrong position,” Head said. For example, Tanya is justifying she deserves the username because she has more followers, and the author can say she snatched the handle first and has had it for longer. So the question is, who’s right?

According to coach Head, families tend to draw sides and form judgments of right or wrong when emotions run high. And there are consequences to both. “Clearly the bride seems to be holding the upper hand through the threats of ‘this ruining her special day’ and getting the families involved is creating huge pressure for the woman. That is manipulation at its highest.”

“Sadly, this is also affecting the woman’s husband and putting him in a very difficult position. Does he side with his wife or the family? Do they take a stand and not go to the wedding? That will be a rift for years to come,” Head added.

Later on, the woman joined the discussion in the comments to clarify some details about the incident 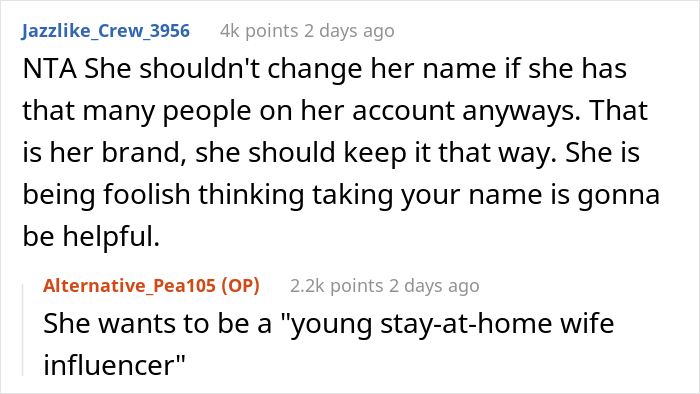 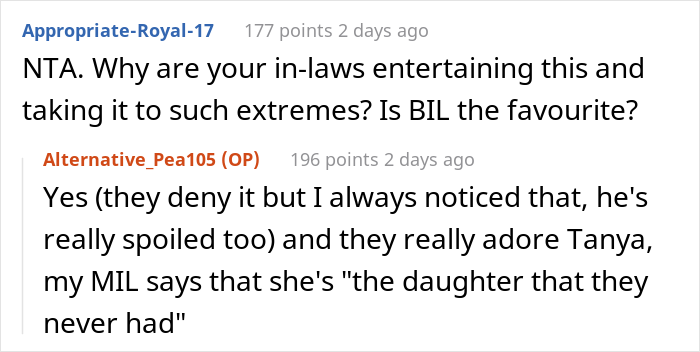 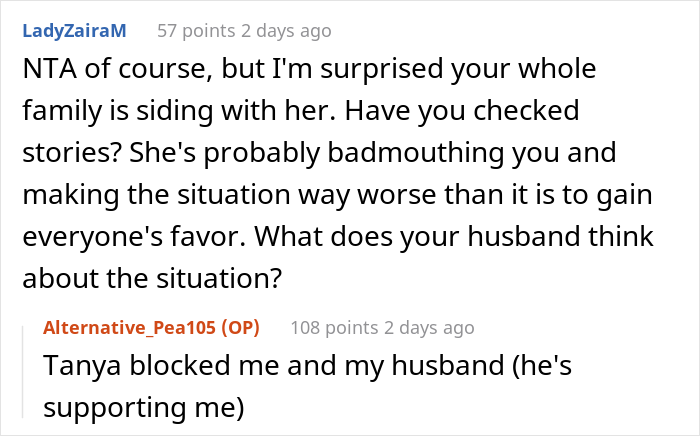 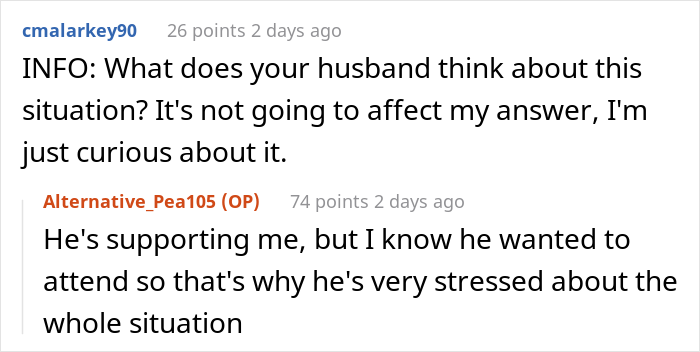 When it comes to handling these situations, it’s important to consider the consequences of both scenarios. Head noted the author of the story needs to decide if the outcome of holding out is worth the strife this is causing in the family. “I admire her for giving a solution, even though it was not agreeable. Finding a solution and then negotiation is always the first step in any disagreement,” the coach added.

The main piece of advice Head would like to give the woman is to gift the handle to Tanya in a very gracious way. This way, she can empower herself to rise above the manipulations of both the bride and the family who seemed to have joined forces against her, instead of giving in and feeling controlled. “You will always come out looking more mature and considerate,” Head noted.

“Here is what I would suggest she say: ‘I’m sorry that this has caused a rift between us and the family during this very special time. I was very hurt when you used these tactics to get what you wanted. I believe this is my right and can continue to keep this handle. However, I understand that this is important to you. I would rather you be happy than to continue with this disagreement.

I have taken the time and effort to free up that handle for you. In the future, I would ask that you might be willing to accommodate me when something important comes up for me.‘”

Coach Head added it would also be beneficial to have a discussion with the husband and say: “In the interest of peace in the family, I am willing to do this. However, in the future, I expect you to support me.“

“For me, handling challenging circumstances has been more rewarding than getting my own way. It shows that I am willing to let go of the outcome,” Head said. But she also mentioned that in difficult situations, you sometimes need an outside perspective to know how to best handle the incident. If that seems to be the case, Head offers many coaching programs, as well as a free call on her website, for anyone who’d like to create the meaningful relationships they desire.

And people had a lot to say after reading what happened 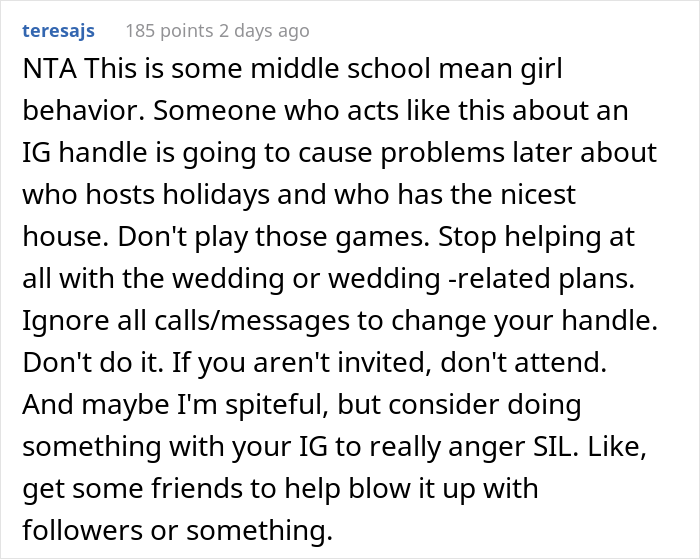 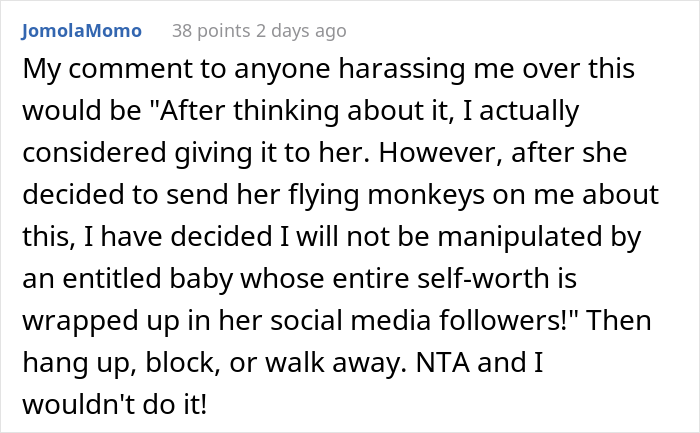 The post “Username Aesthetic”: Bride Asks This Woman For Her Instagram Handle, Says She Will Uninvite Her From The Wedding If She Refuses first appeared on Bored Panda.