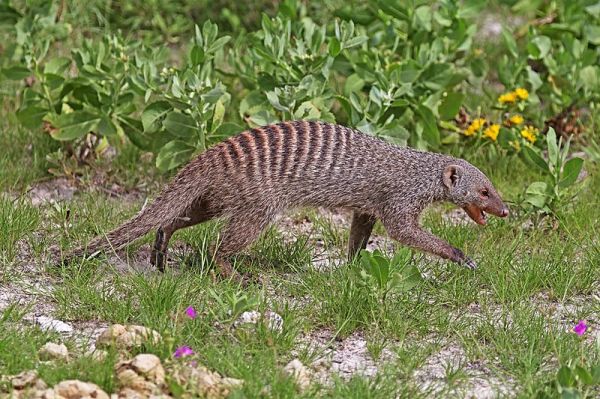 Banded mongooses are fearless fighters, and are famous for standing up to venomous snakes. A new study, combining observation and genetic analysis, shows that they’ll even go to war with rival groups of other banded mongooses. What’s notable about these fights is that they’re apparently started as an excuse for sex.

The researchers found that the fights were predominantly started by females, who wield a great deal of influence over the group, according to the research, published this week in the journal Proceedings of the National Academy of Sciences. This influence is particularly great when females are ovulating and capable of becoming pregnant, which in banded mongooses happens for all female group members at the same time.

Video taken by the researchers revealed that females mated with the males of rival groups during battle, while the protective males in their own group were distracted, per New Scientist. Fights were more likely to occur when females of a group were in the fertile stage of their reproductive cycle, called estrus.

“Estrus females have been observed to lead their group deep into enemy territory, closely followed by mate-guarding males, directly inciting intergroup fights,” write the researchers in the paper.

This is not only a betrayal, but an atrocity as mongooses can get killed, including pups. But it’s also a scheme to refresh the gene pool. Mongooses are born into permanent groups of around twenty or so individuals, and inbreeding is assured without some way of mating outside the group. It seems a pity they couldn’t find a less violent way to do it. Read about the research on mongoose war and sex at Smithsonian.