There is no excuse for fat shaming. Unfortunately, it happens on a very frequent basis, often masquerading as ‘humor.’ Waiters, of all people, should know better than to make fun of their customers, especially considering how often they have to deal with rudeness themselves.

Gloria Bennett, a writer living in upstate New York, shared a very unpleasant experience from some time ago when she’d gone out for lunch with her friend, ‘Stephanie.’ Their waiter was incredibly rude, kept making fun of Gloria’s weight throughout the meal, and it practically borders on harassment. The cherry on top was how the ‘comedian’ quipped that the woman might eat her friend. That is just… awful. Nobody should have to go through that.

Scroll down to watch Gloria aka @theglobalgrrl’s full TikTok video where she explains what happened in detail, and how one of her friends totally didn’t believe her. Let us know what you think in the comments, Pandas. And if you’ve ever had to deal with rude people making fun of you, tell us how you reacted.

Gloria gave Bored Panda a bit more context about what happened and why she didn’t confront the waiter herself. “I was living as an international student in a European country when this happened, which is why I didn’t reply. This behavior is much more common in other cultures and is often seen as an acceptable form of humor. It was not my culture or my country, and as an immigrant, ignoring it was safer than making a scene.”

Meanwhile, Bored Panda also got in touch with comedy expert Ariane Sherine for a chat about mean jokes, what drives some people to fat-shame others, and how best to react to folks like that. “Speaking as a plus size woman, I think some people do it to try and be funny, but there’s another type who does it because they’re judging you and want to feel superior,” she told us. Read on for the full interview with the comedy writer and to see what she would’ve told the rude waiter if he had said that she’d eat her friend.

As part of a TikTok trend, Gloria shared a video explaining how a waiter fat-shamed her 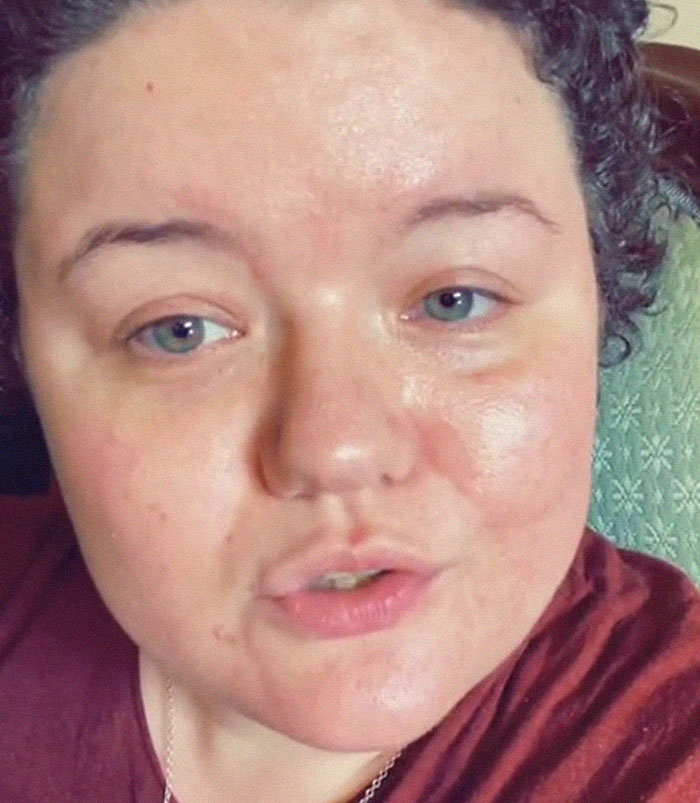 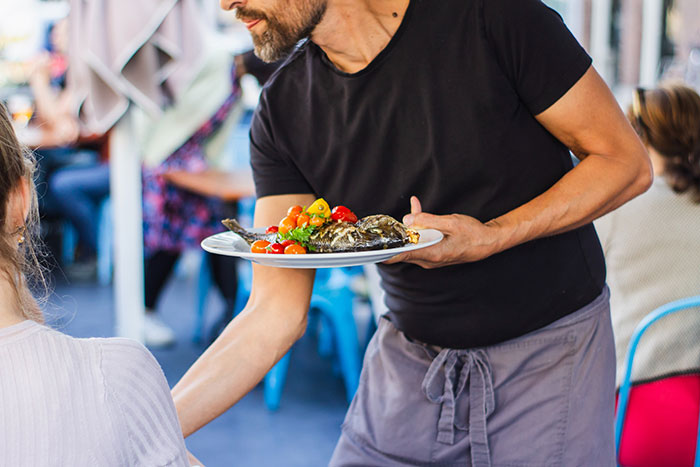 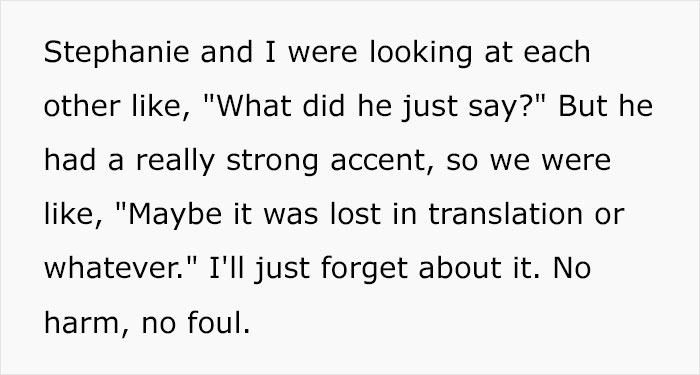 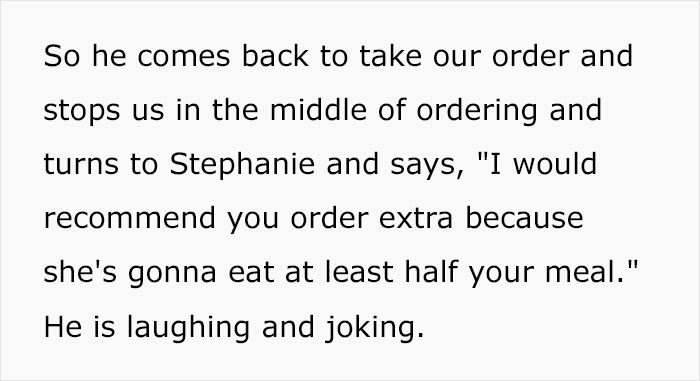 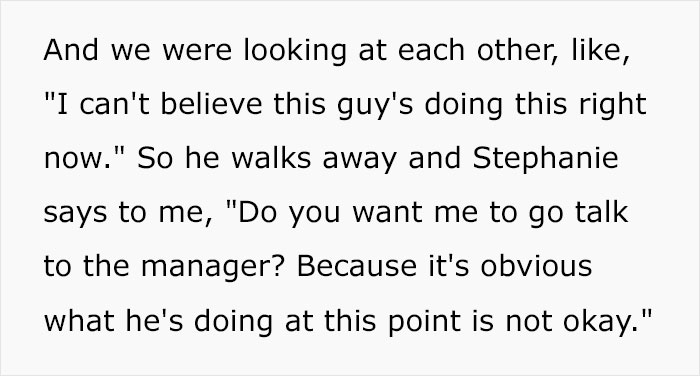 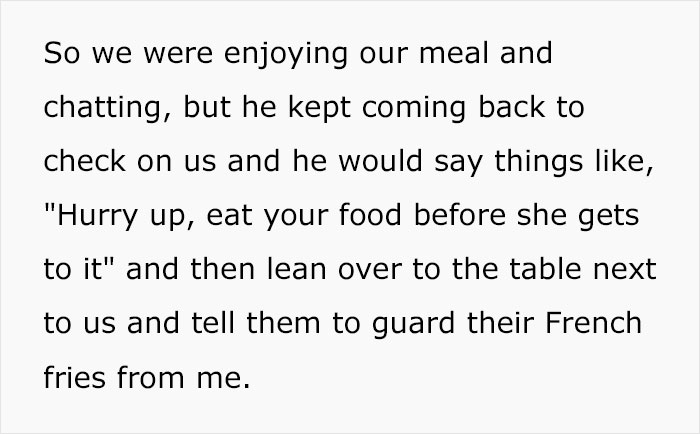 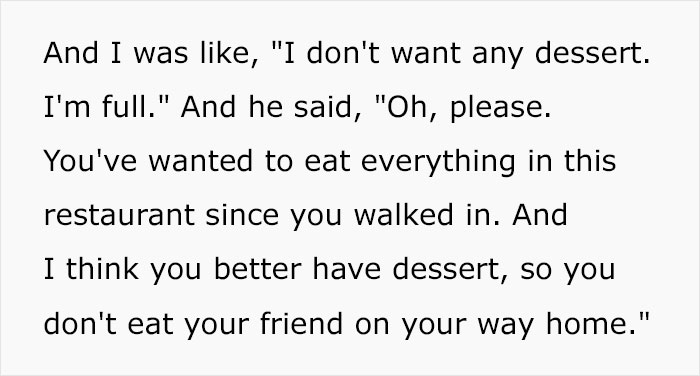 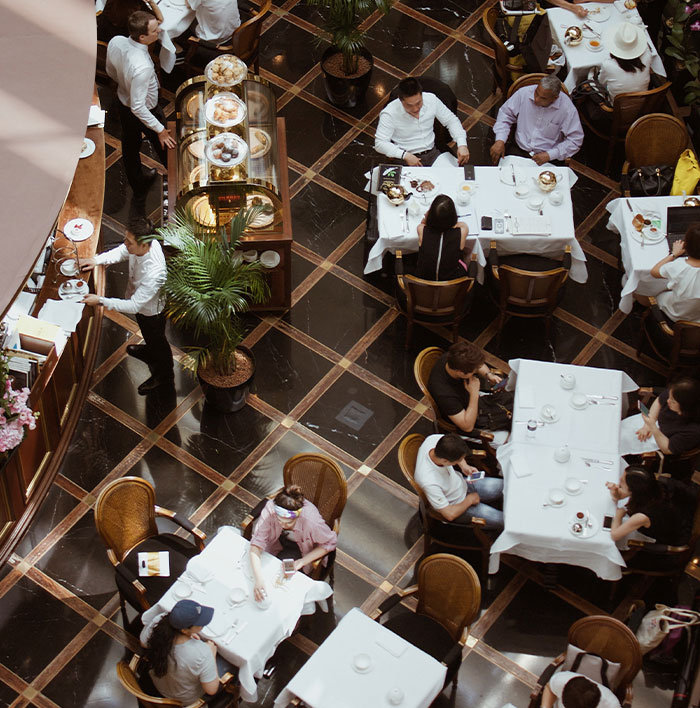 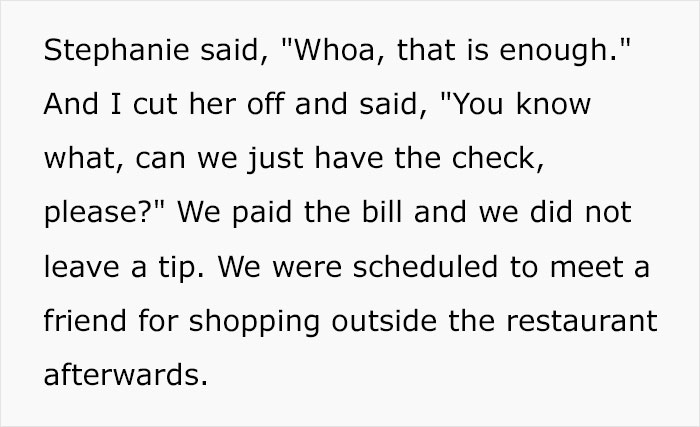 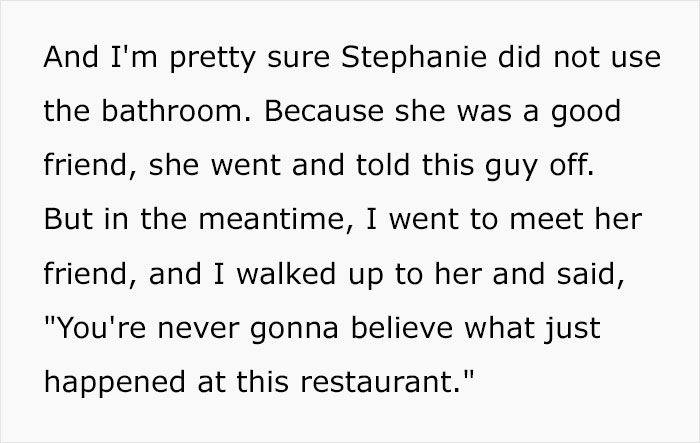 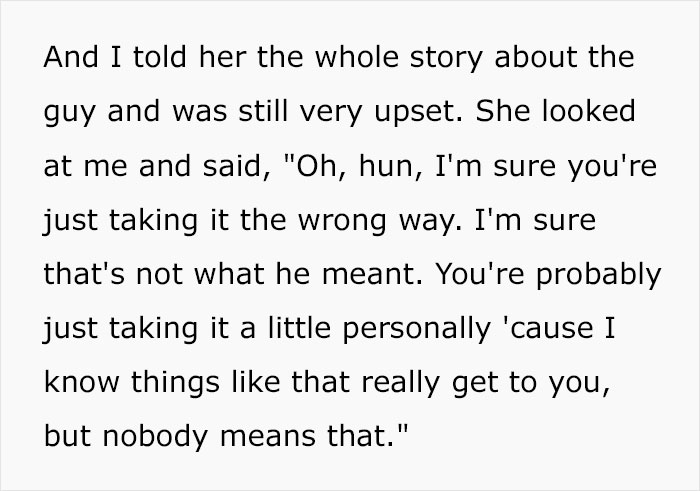 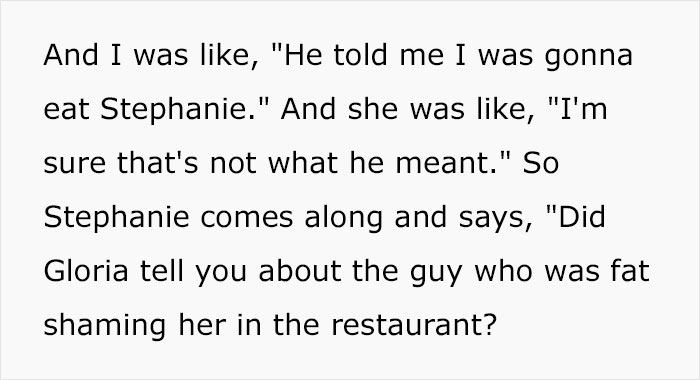 You can watch her full video right over here

“I think the general rule for comedians is ‘never criticize someone for things they can’t change in less than five minutes.’ So if they’re sitting in the front row and wearing a funny hat, that’s fair game. But if they’re fat, that’s off limits. But a waiter isn’t a comedian, they’re there to make your visit to the restaurant smooth and enjoyable, so I don’t know what this guy was playing at,” comedy writer and expert Ariane, told Bored Panda that employees serving customers shouldn’t try to be stand-up comedians.

Ariane shared an example of how fat-shaming can happen absolutely anywhere. “I was walking down the street one time and a guy yelled out ‘Big belly!’ I wanted to yell back ‘Tiny dick!’ but he was twice my size (ironically) so I didn’t feel able,” she revealed to Bored Panda.

“It’s a sad fact of life that people judge others for their weight when it’s such an uninteresting thing about another person. Like sure, surround yourself with physically perfect people if you like, but that says more about you than it does about fat people.”

We also wanted to get Ariane’s opinion on how best to react when someone starts fat-shaming you in public. “If you have a sharp wit, use it,” she said. “If a guy joked that I was going to eat my friend, I’d say ‘Yes I am, and you’re next! So you’d better get me my food quickly or else.’ It’s not worth the rise in blood pressure getting angry about it. Some people are dicks, that’s the way of the world—don’t let them ruin your day.”

Gloria’s video was viewed 1.2 million times and had 140.8k likes at the time of writing. She started up an important discussion about the limits of humor, fat-shaming in public without fear of repercussions, how the Halo Effect is a real thing, and how ignoring an adult bully might not always be the right way to go forward.

Some people called Gloria out for her story. Here was her response 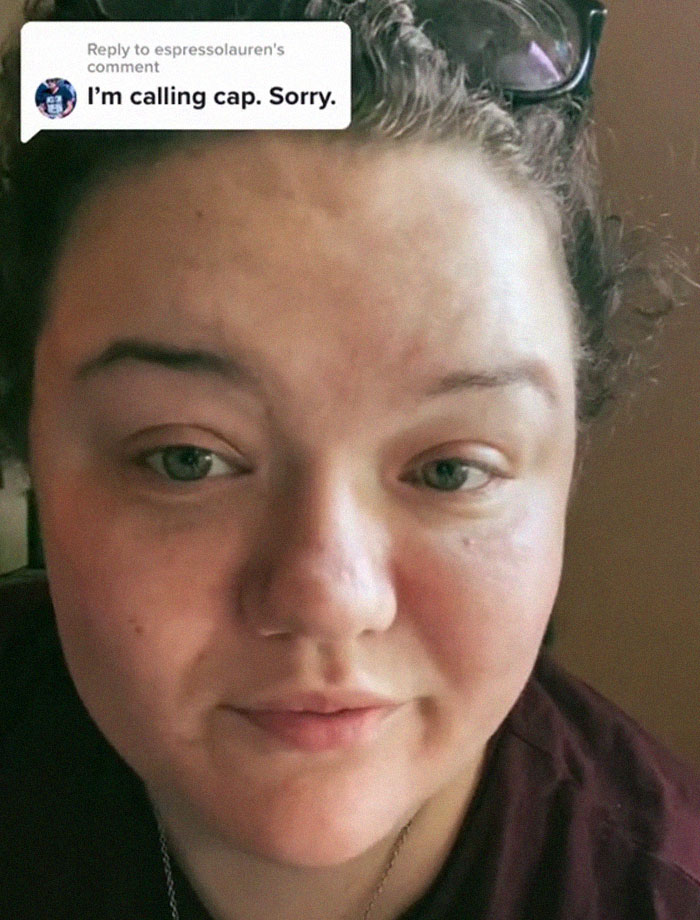 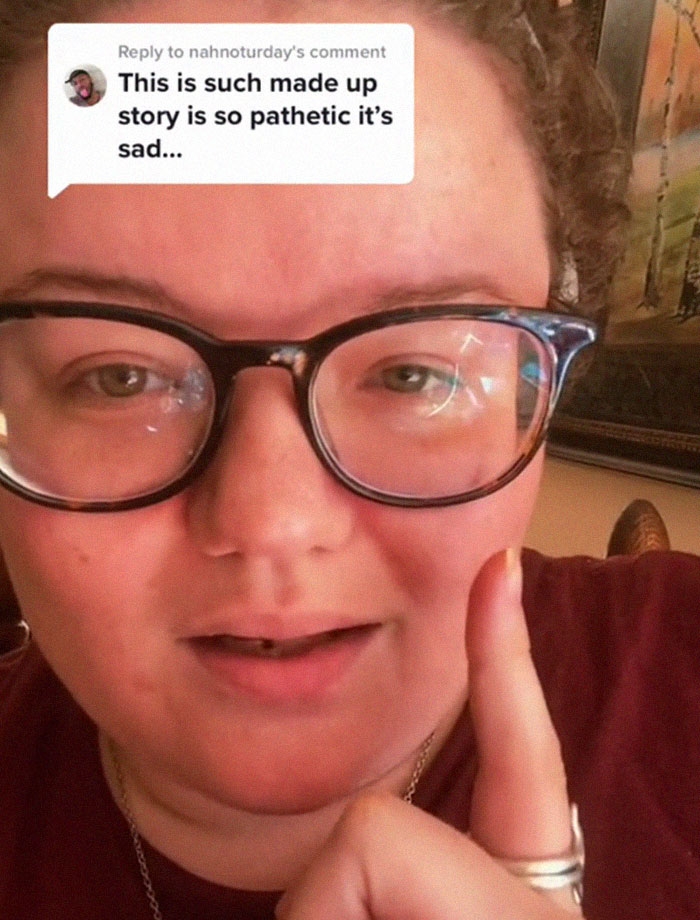 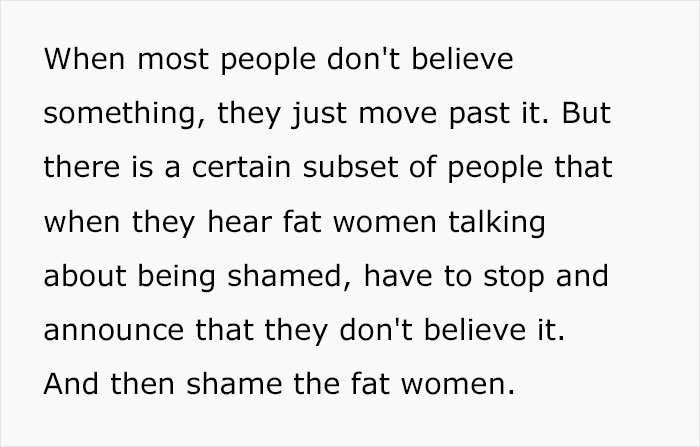 As long as the humor’s lighthearted and the jokes aren’t aimed at demeaning anyone, we’d probably be fine with a comedy-loving waiter. However, what Gloria’s waiter did went so far across the line, you couldn’t even see the line anymore.

What also hurt to listen to was how the woman’s friend completely didn’t believe her story. It was only when Stephanie confirmed what happened that she finally said that she was appalled by what happened.

Fat-shaming can happen absolutely anywhere. At your favorite restaurant. At your gym. Even online. Once you see how common it is, you realize how much harassment some people have to deal with on a regular basis.

Fitness nutrition and weight loss specialist Shelby Goodrich Eckard, who got fat-shamed when she rejected a guy’s advances, told Bored Panda earlier that “men don’t have much accountability for their own actions until they are called out on their bad behavior.”

“People, if they change, change on their own time and for their own reasons,” she said that it’s not someone’s duty to babysit a guy until he improves for the better.

Meanwhile, Canadian mom Shelby Rodriguez, who got shamed at her gym, told Bored Panda that she believes “people are uncomfortable seeing larger bodies, especially people who have larger bodies and are comfortable wearing things like crop tops.” That, in her opinion, makes some individuals turn to fat-shaming instead of being supportive, polite, and decent.

“I don’t think there is a simple answer to what needs to happen for change at a societal level, the issue is so extremely complex and something that has been going on since before I was even born. But I think a great first step is not caring what others wear into the gym, as long as they are comfortable,” she said.

“Keep going even when something brings you down. Don’t let small bumps in the road make huge ripples in your life. I love the term, ‘Dedication not motivation’ because it’s so true. Motivation comes and goes, but if you stay dedicated even when you’re not motivated, you’ll get where you want to be,” Shelby shared her advice about aiming for your goals.

The post Woman Goes Viral On TikTok After Sharing How A Fat-Shaming Waiter Told Her To Order Extra Food So She Doesn’t Eat Her Friend first appeared on Bored Panda.