Not all birthdays are created equal. When we let most numbers pass without a fuss, milestone occasions ending in zero — bigger flips of the page — are important enough to mark the passing of another year. When you reach that landmark age, you know you deserve more than a witty card and a cake blaring “wow, you’re old!”. Not because you expect your loved ones to spend a small fortune, but because you hope they will make your day extra special.

Unfortunately, that was not the case for one woman who recently shared on Mumsnet that her 30th birthday left her deeply disappointed. Her boyfriend, who is “not struggling financially”, made no effort with her present and also managed to turn a sweet celebratory dinner into a bitter experience.

Unsure of what to think of his actions, the woman reached out to the community and asked them to evaluate the situation. Scroll down to read the story in full, as well as how the people reacted. Then decide for yourself what the woman should do, and be sure to weigh in on the discussion in the comments. 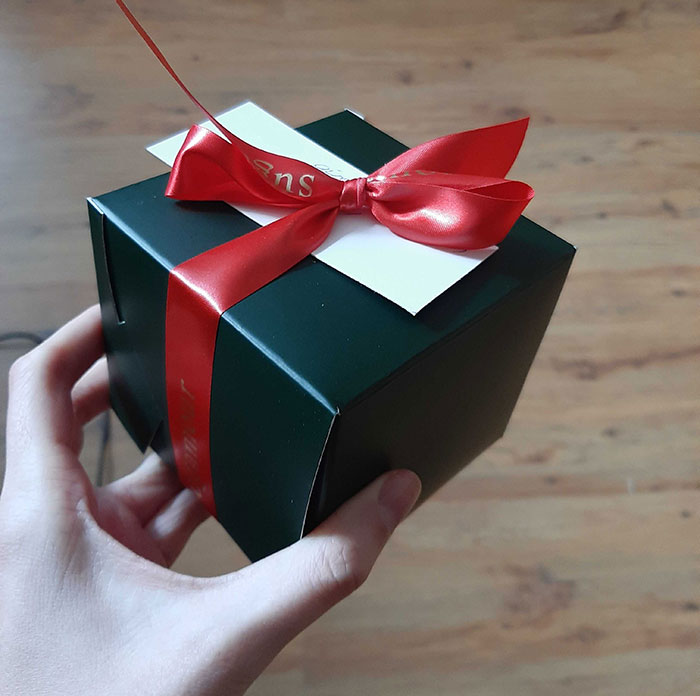 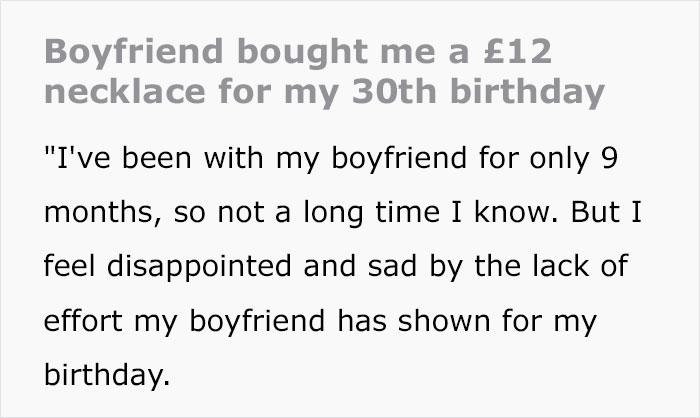 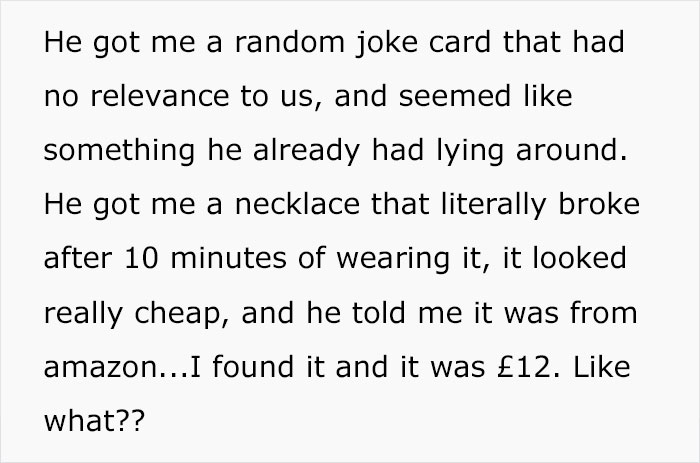 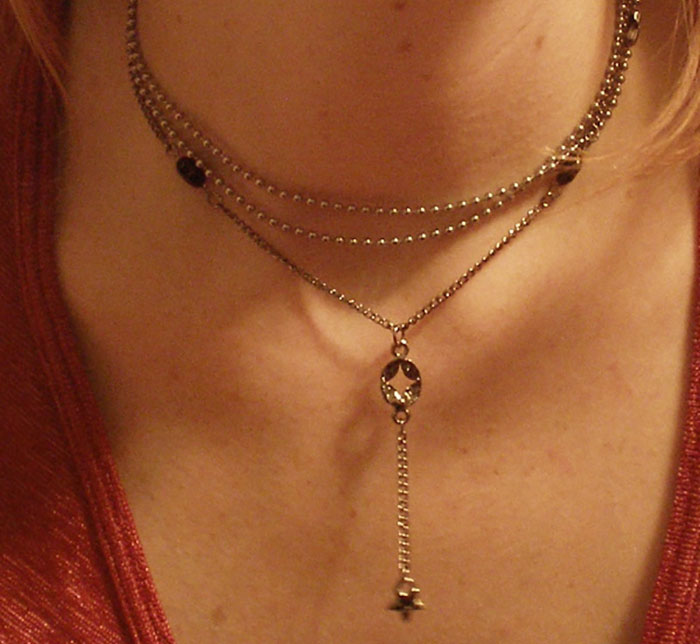 After reading the post, fellow forum users were quick to offer their opinion on what the woman should do. Especially considering that the couple is still in the honeymoon phase, some said the woman should dump her boyfriend — but not everyone agreed. Other people chimed in stating the boyfriend did at least remember the occasion and expressing that the amount of money he spent on the gift isn’t what really matters.

Gifts can be a powerful tool in bringing two people together. But sometimes, present-giving is a bit tricky. Whether you’re unsure what to buy, the relationship is new, or the traditions you were raised in are rather different — thinking of something special to give your partner can often feel like navigating a minefield.

While there is no set of rules on how much you should spend, a survey of more than 1,000 U.S. consumers conducted by LendingTree found that spending is highest on birthday gifts, surpassing milestones like weddings and graduations. Moreover, 45% of recipients admitted to spending more than they can afford because they “want the recipient to think highly of me.” Over half of consumers felt pressured to buy a gift at some point, and another 39% reported typically spending between $100 and $499 on gifts for others’ celebrations in a year.

Jeff Galak, an associate professor of marketing at Carnegie Mellon University’s Tepper School of Business and co-author of a study called Why Certain Gifts Are Great to Give but Not to Get, found that givers mainly focus on the moment of gift exchange, whereas recipients primarily think about how valuable the object will be once owned.

When it comes to reasons people choose bad gifts for their loved ones, Galak previously told Bored Panda that mistakes occur because givers don’t ask recipients what they want. “There’s an odd cultural taboo that exists which makes people uncomfortable asking someone what kind of gift they want. But that taboo is entirely inappropriate. Gift recipients know what they want and they are eager to tell gift-givers. There is nothing wrong with sharing that information and there’s nothing wrong with asking for it.”

According to the professor, a wrong gift can also signal a lack of care. “If a giver gives a gift that isn’t well received, there is a chance that the relationship will be strained. Gifts act as a social lubricant that signals care for another person… but that is undermined when the gift is bad.”

Of course, there is one way to avoid finding ourselves in these kinds of situations. “Just ask! The easiest way to give a good gift is to ask someone what they want. People appreciate the fact that they are being asked as that signals that the giver really wants to give something that is well-liked,” he explained.

Ultimately, everyone has a different financial situation and a certain relationship with the birthday star, so it’s best to communicate with each other and determine what works best for you. What did you think of the situation? Do you think the woman has a fair point or expects too much of her partner? Let us know where you stand on the matter in the comments, we’d love to hear from you.

After reading the story, some people sounded the alarm about the relationship 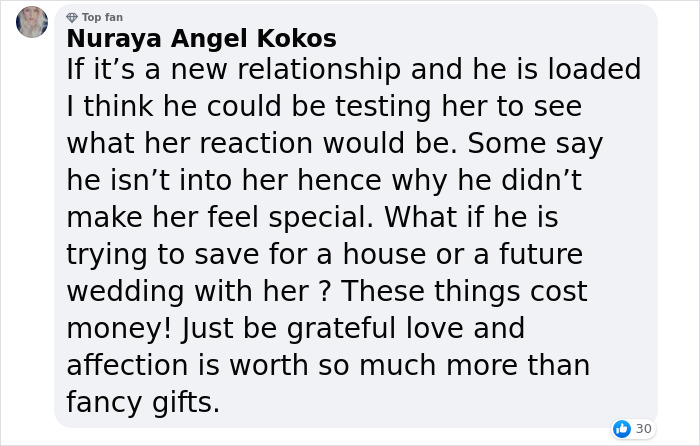 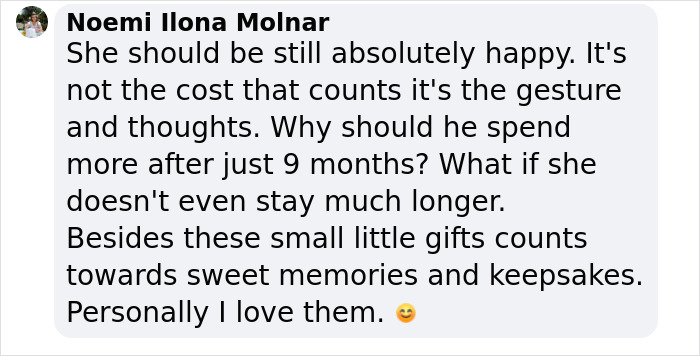 The post Woman Sad And Disappointed Her Boyfriend Who Isn’t Struggling Gave Her A Necklace And Asked To Split The Restaurant Bill On Her 30th Birthday first appeared on Bored Panda.