When we’re kids, no other place seems as magical and full of treasure as the wardrobe. All of the adult clothing, the oversized high heels, hats, skirts as long as our whole tiny bodies… Playing dress-up is truly a wonderful treat for the imagination. But the same clothing takes on a different property when we grow up; instead of a toy, it turns into a time machine, connecting us to our most beloved people.

Bored Panda has explored this topic once before – a granddaughter dressing up like her grandmother. But this time, it goes even further as this granddaughter found a suitcase full of honeymoon clothing back from the 1950s.

Before we dive into the details and into some fabulous fashion, make sure to leave your thoughts in the comments below, upvote the story and follow the author – me, hi! – to show your support for wholesome stories!

A green suitcase was passed down by her grandmother, but what was inside? Well, all of her honeymoon outfits from 1952, of course! 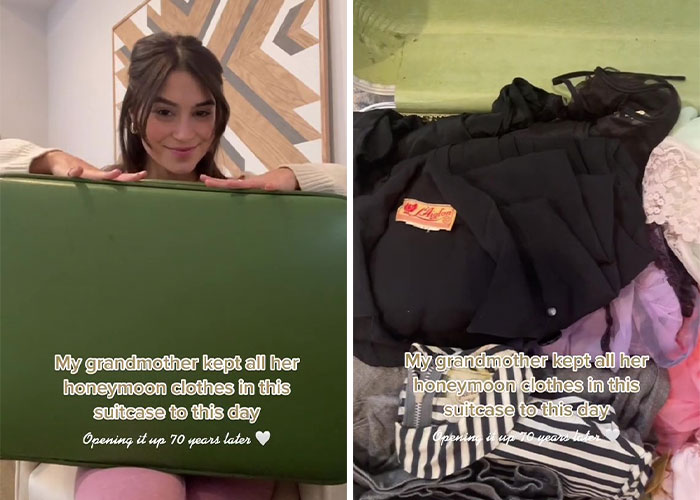 A woman named Maddy Bill, of Ambler, Pennsylvania, started her TikTok journey off with a bang, as her third video ended up going viral. More than 6.6M people got intrigued over Maddy’s green suitcase full of her grandma’s honeymoon clothing, dating all the way back to 1952.

Many of these people wanted a full clothes reveal, and thus, a little series was born with the 27-year-old taking it upon herself to display and model some of the pieces.

More than 6.6M people got intrigued over Maddy’s green suitcase, asking her to model some of the pieces, and thus, a little series was born 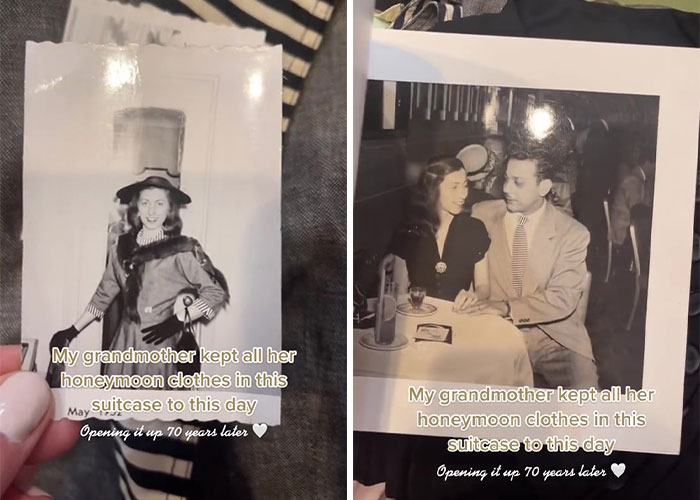 Her grandmother, Marie D’Alessandro Donato, took all these pieces to New York over 70 years ago. She and her late husband Anthony James Donato met shortly after he got back from World War II. Marie told Insider that she played hard to get for a whole year, and it wasn’t until her older sister told her to give Anthony a try that she decided to go on a date with him.

The pair got married in 1952, Marie 22 years old and Anthony- 27. They visited various spots in Manhattan in May of that year for their honeymoon. Marie, now 91 years young, told her granddaughter that it rained throughout their trip. “She was like, ‘I did not care because I was with my honey’- that’s what she called my pop pop,” Maddy recalled.

Once Maddy got to trying on the clothing, she was thrilled to find out it fit “like a glove,” the black dress becoming her favorite 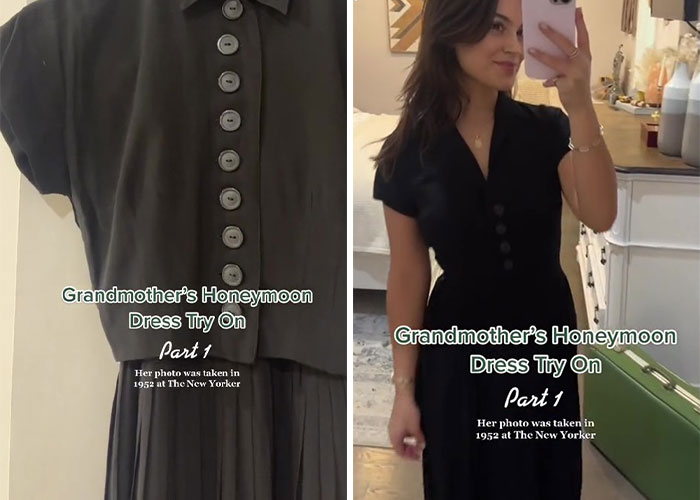 She continued to say that Marie “had just a wonderful time just being with him and really just taking it all in – that there was this time in their life where they could start a family and all these things she’d always dreamed of.” Their time together, celebrating their honeymoon, was so special that she wanted to preserve the memories in a tangible way.

Almost like a time capsule, she washed and then stored all of her clothing and accessories, as well as adding in some pictures of the pair together. “The excitement of the future ahead was what my honeymoon meant to me,” Marie explained. “I guess, in a way, I wanted to save that feeling in the suitcase for my daughters and their daughters.” 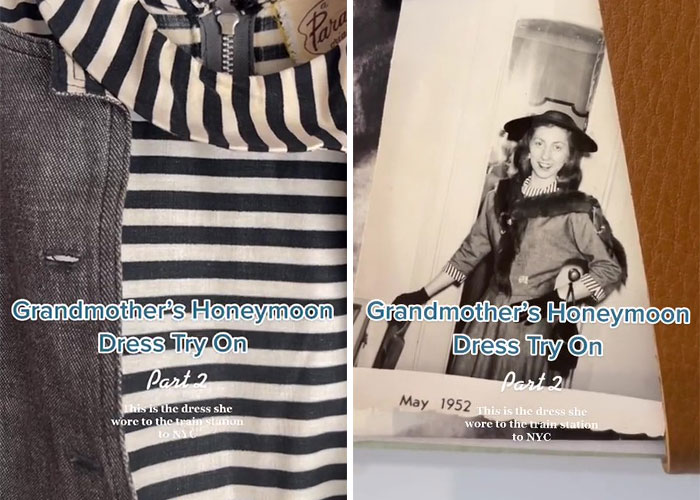 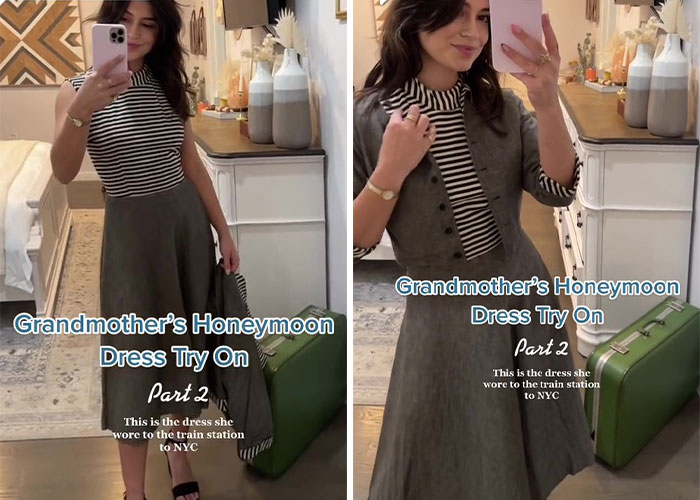 Maddy recalled that her grandmother was always in a cute outfit while she was growing up: “She would always look pristine” 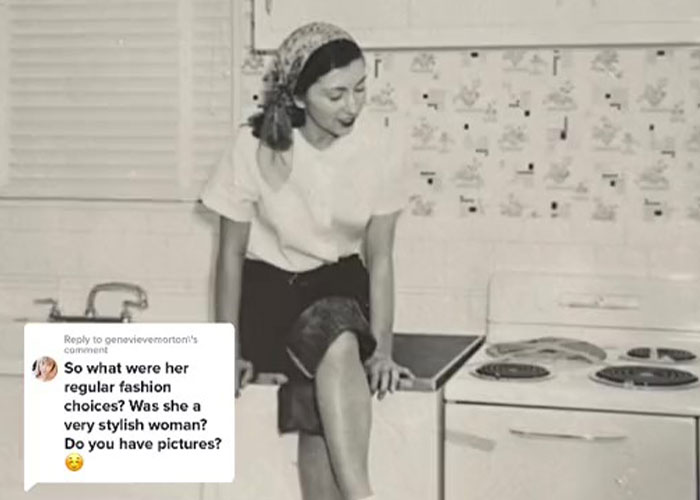 The suitcase was thus passed on to Maddy by her mom, who hadn’t opened the suitcase herself. So, they decided to crack it open together. “When my mom and I opened it up, it was like all the photographs I saw of my grandma growing up came to life,” Maddy said.

“It was remarkable because I felt like we were bringing the past to life.” She was so moved by what it represented and the amount of beautiful history present that she decided to blast us all into the past in the series we’re exploring today. 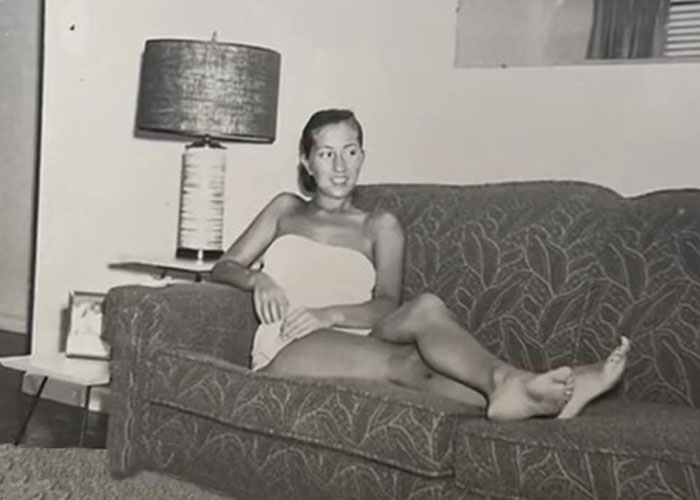 “I’ve always known about this suitcase ever since I was a little girl. My mom discovered it when she was a little older and she told me about it and she selflessly saved it for me and my sister when we were of age,” Maddy told Good Morning America (GMA).

“I opened it up and I was just like, ‘This is the coolest thing I’ve ever seen,’ because it really just brought back everything to me, especially memories – my grandfather passed about 21 years ago – so just those memories of my grandparents in that time in their life, it’s just really cool.”

Maddy bonded with her grandparents from an early age as they would watch over her when her parents were away at work. She described Marie as “very nurturing and loving and caring,” thus being able to try on her clothes decades later was particularly special.

Marie and Anthony got married in 1952, Marie 22 years old and Anthony – 27. The pair spent their honeymoon exploring Manhattan 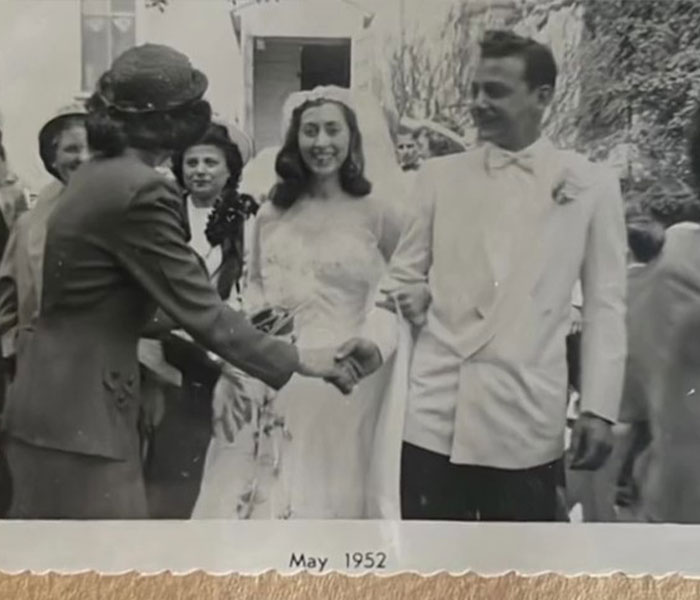 Their time together, celebrating their honeymoon, was so special that she wanted to preserve the memories in a tangible way 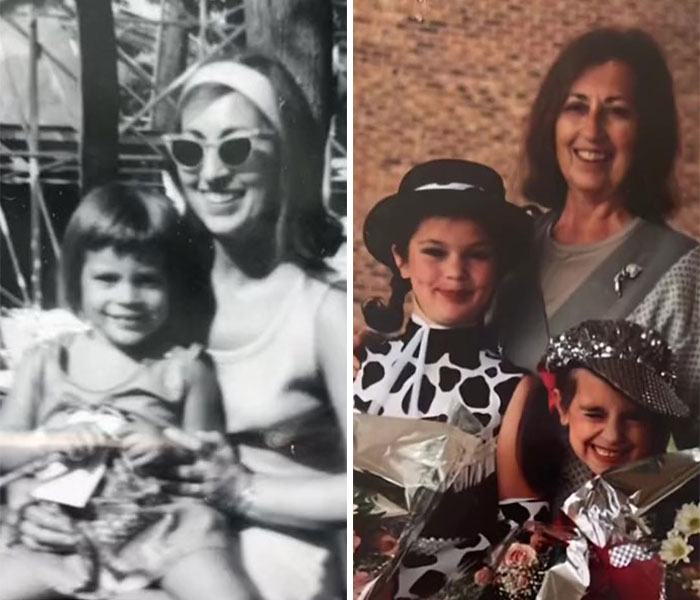 Maddy recalled that her grandmother was always in a cute outfit, stockings, and had red lipstick on while she was growing up. “She would always look pristine,” she said.

She added that being stylish has always meant a lot to her grandmother because it was a value that her older sister instilled in her. “They didn’t have a lot of money, but they took a lot of pride in the things they wore,” Maddy said.

Almost like a time capsule, Marie washed and then stored all of her clothing and accessories, as well as adding in some pictures of the pair together 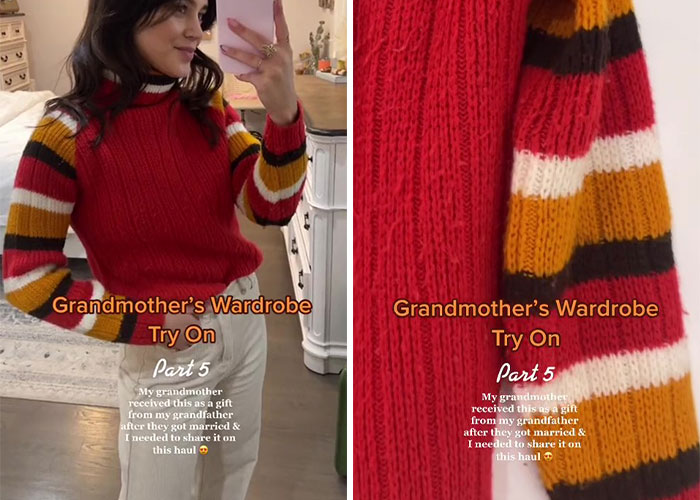 Once Maddy got to trying on the honeymoon clothing, she was thrilled to find out the pieces fit her “like a glove.” Despite the items being over 70 years old, they all were well preserved and of good quality. “There’s elastic on some of the pieces and [they’re] still springy,” Maddy laughed.

The first piece she tried on for TikTok was a black buttoned dress with a cinched waist and short sleeves. “I remember in her living room, she has that portrait of her at the New Yorker… in her black dress, and it’s just always been something that fascinated me,” Maddy explained. 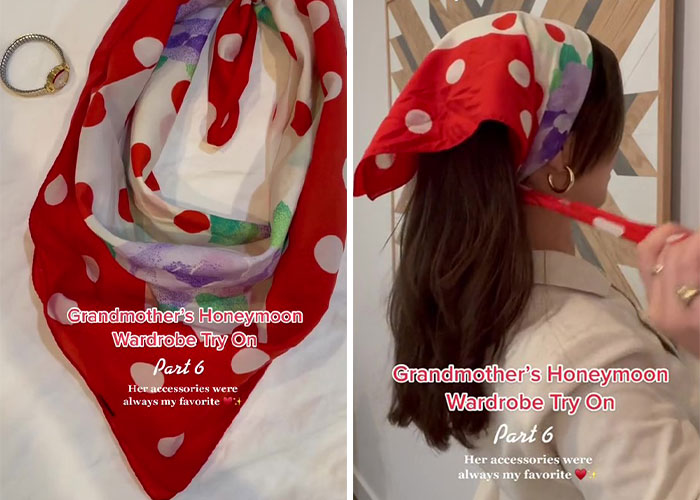 “I can’t even describe the feeling of putting it on for the first time and having it fit perfectly,” Maddy said, noting that this dress was her favorite piece.

Marie added that she felt like she was back on her honeymoon when she saw her granddaughter in it. “I wish I was young again and could do it all over,” she said. “Seeing the dress fit her as perfectly as it fit me was like jumping back in time.”

Maddy then showed off a striped top and a matching gray jacket and skirt ensemble that her grandmother wore to take the train from Philadelphia to New York. Blouses, sweaters, dresses, and numerous accessories followed suit. 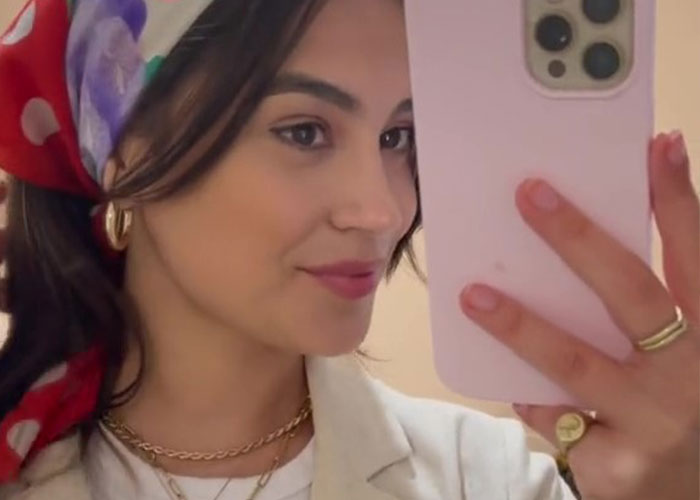 “It does make me feel closer to her,” Maddy said, adding that she’s saving some of the items for special occasions 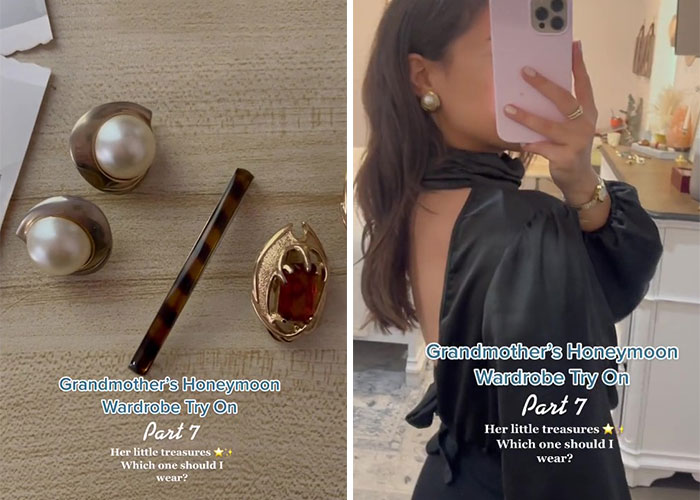 Marie is aware that she’s becoming quite famous on social media, although she’s not on social media herself. “I just described it like a little television and people all over the place are seeing her and they’re admiring her style,” Maddy explained.

“This video going viral was my way of showing the world how stylish and amazing she is. Even better than winning best dressed at Conshohocken High School” – a contest Marie lost by just one vote.

She believes this tradition won’t end with her, hoping that the pieces can be savored by someone in the future 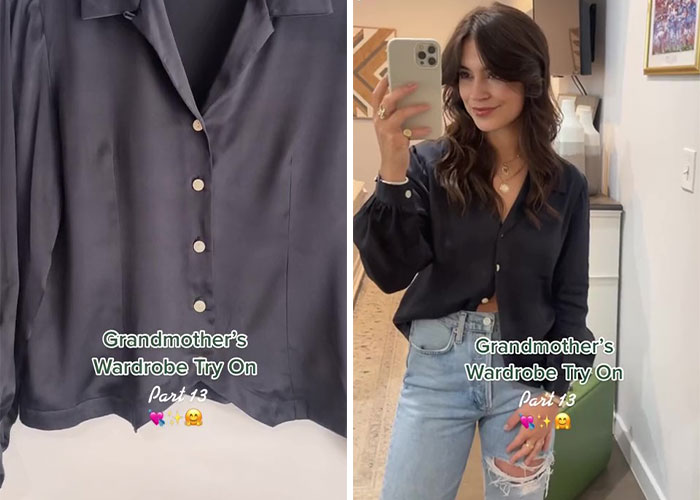 “She had a few blouses that I’ve worn out to dinner with my boyfriend and one of my best friends, and I just feel like it’s cool that it’s just a part of her that I’m bringing into the present day, and it does make me feel closer to her,” Maddy said, adding that she’s saving some of the dresses to wear for special occasions.

Maddie believes this tradition won’t end with her. “I definitely want to save it for someone. Maybe my future kid or someone special in my life that’s younger than me, because I mean, I don’t want it to just be a current piece that is being worn, I want it to be savored for someone in my future too, like my grandmother did for me.” 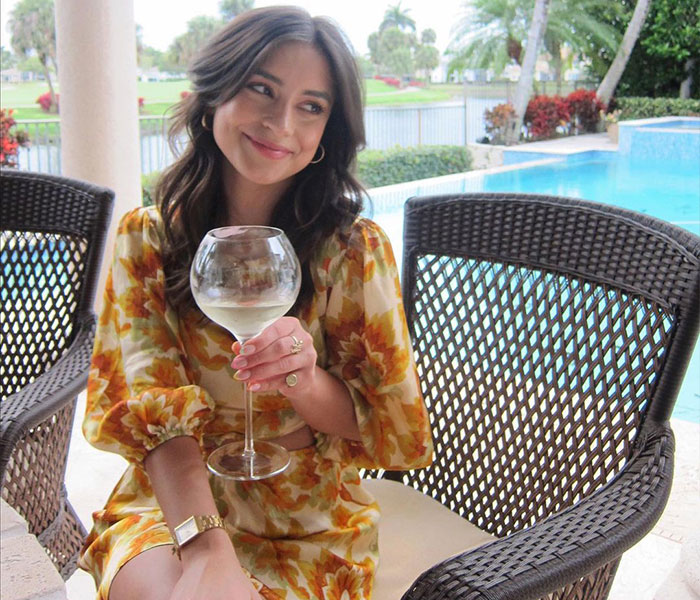 “My grandmother took pride in the way she presented herself, and I think this is a wonderful thing and what I hope to emulate in my life,” Maddy said. “I’m glad I got to share my grandmother and her fashion sense with the world and shine a remarkable light on a woman that truly deserves it.”

We wish Maddy and her family all the best and can’t wait to see what she comes up with next!

You can watch the video that started it all here

Let us know your thoughts in the comments below. Do you have a collection of things that have been passed down to you? Is there anything that you own that reminds you of your grandparents? Have a wonderous day!

People have loved this idea and the commemoration of her grandparents. Let us know your thoughts in the comments!

The post Woman Unveils Grandma’s Honeymoon Outfits After 70 Years Of Them Being Packed Away In A Suitcase first appeared on Bored Panda.