The internet is a lot of things, but many—not all, but many—fail to register the fact that it has a very distinct personality, a part of which is ridiculing everything that doesn’t make sense or is wrong.

A perfect example of that is the time Germany expressed its support for Ukraine by sending helmets and nothing more. At this point, you can probably see why most would equate it to putting a band aid on a flesh wound.

Well, this, refusing to send heavy weaponry, not discontinuing their imports of Russian oil, and other questionable decisions by the government triggered the internet’s funny bone and everyone and their mothers started reacting to these decisions in the form of memes. And despite Germany making a u-turn on the matter, the reactions are still out there forever in the world wide web. 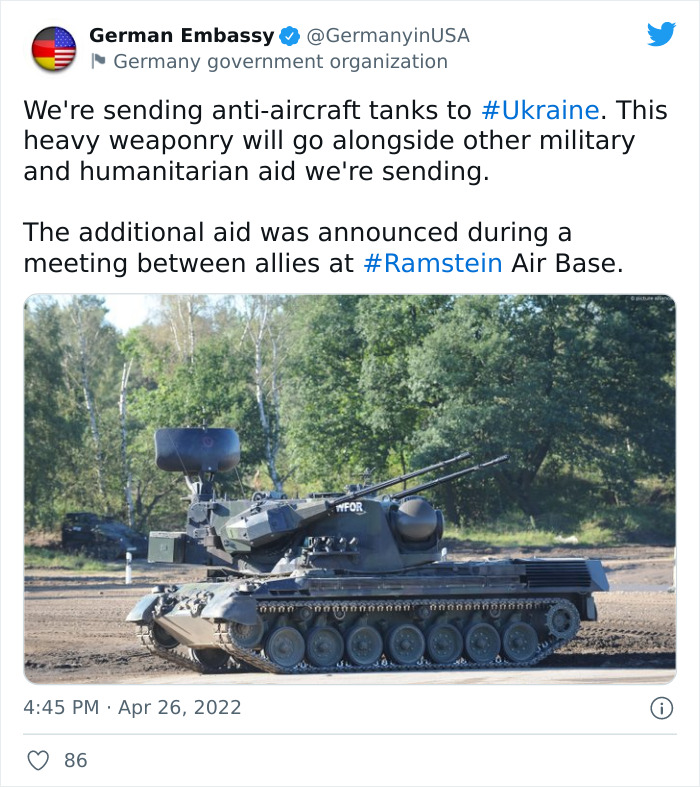 Continue scrolling to check out the best reactions the internet has to offer in our curated list below, as we unroll some context on the whole issue and how Germany is trying to redeem itself with other efforts. 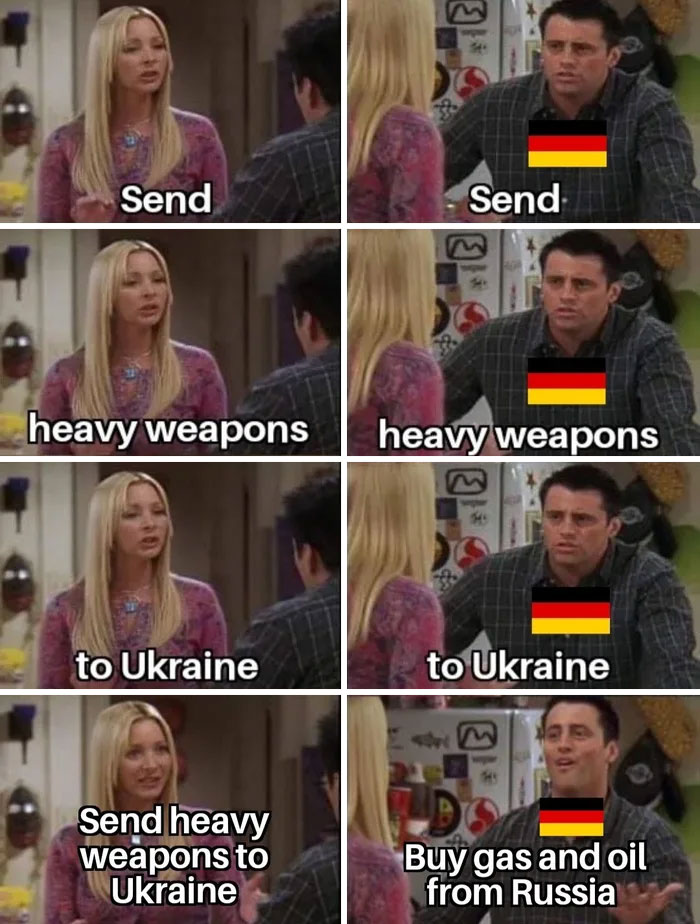 Ever since day 1 of Russia’s invasion of Ukraine, nearly the entire world has been supporting Ukraine in its fight for freedom. Some imposed sanctions, others sent weapons and humanitarian aid, yet others openly condemned Russia’s actions in global international gatherings and conferences, despite having close ties with it on multiple levels. And there were those who did it all.

But in the context of countries sending in everything from long-range artillery to tanks to jet fighters to armored vehicles, amounting to billions of dollars in military aid, there is Germany that initially promised to send Ukrainians… helmets. Just regular military-grade helmets. 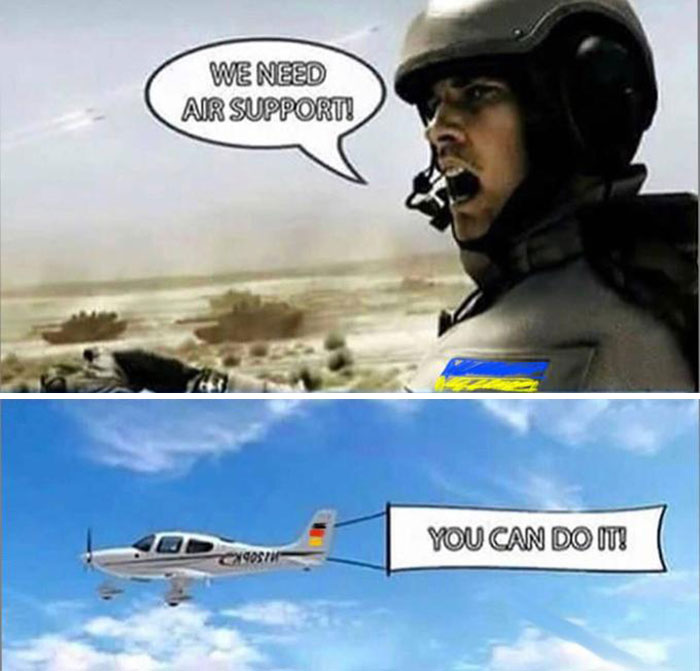 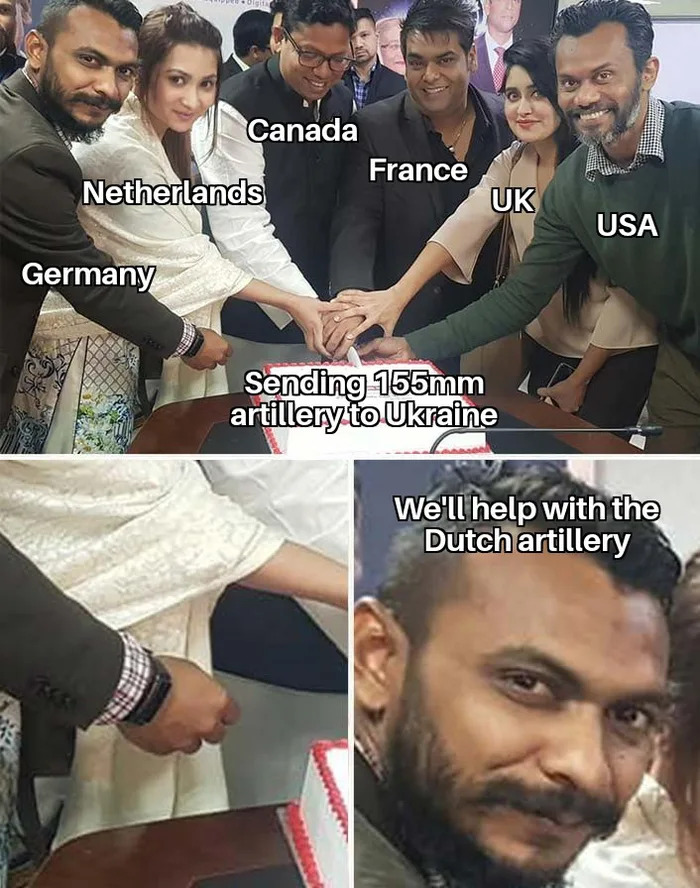 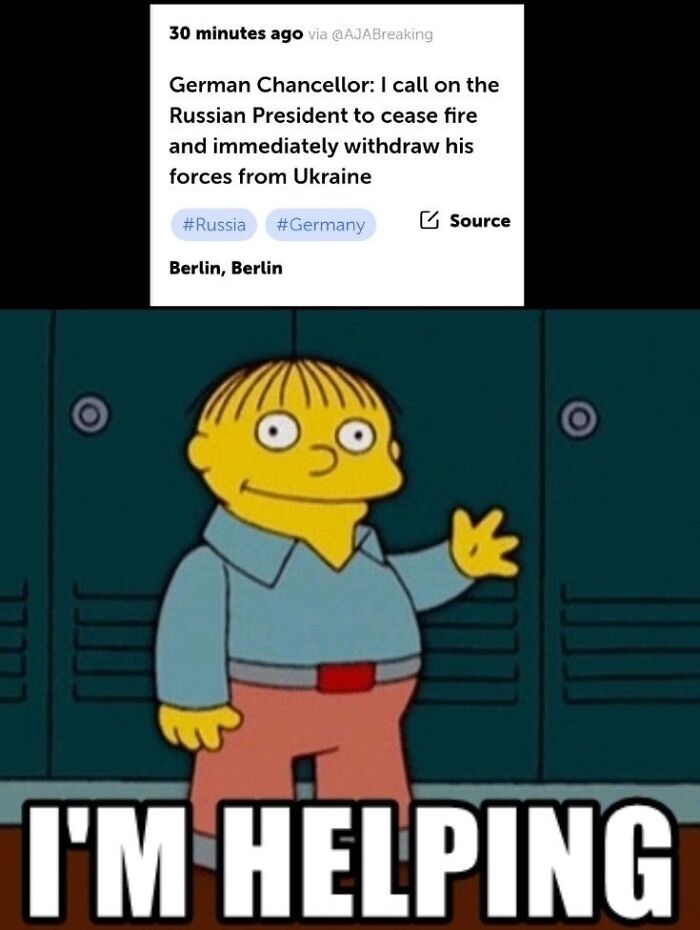 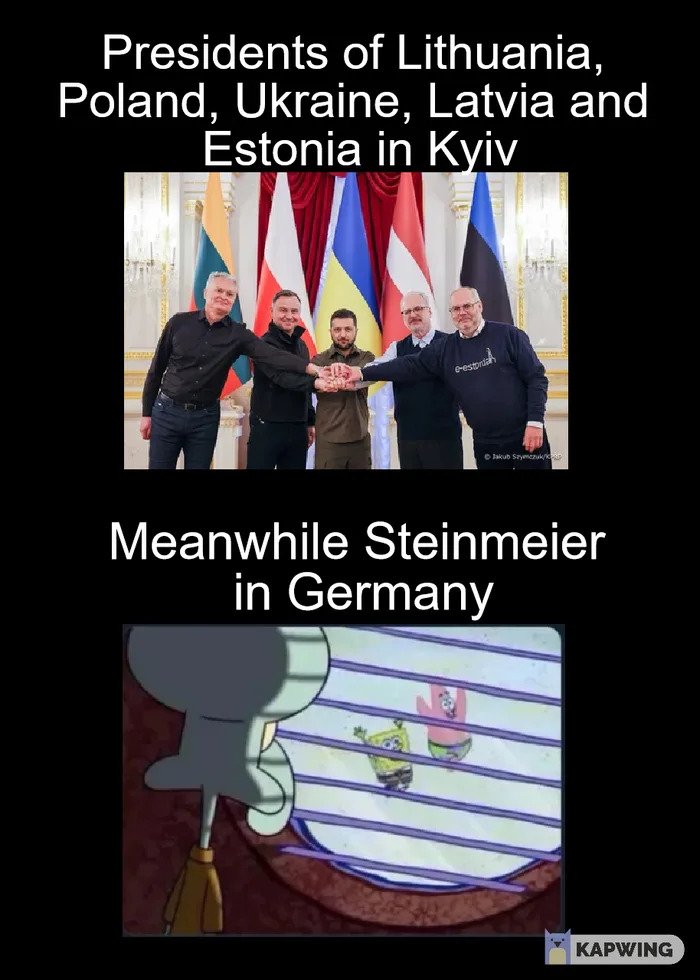 You see, Germany has had relatively good relations with Russia in recent history with the whole Nord Stream gas pipeline project and Germany just generally being a key economic partner to Russia. So, doing the exact opposite is anything but counter-productive.

Still, when nearly the whole world unites at a flick of a finger, Germany lingers in making significant decisions, so they resort to small steps. Helmets.

But none of this really matters to the internet as there is a very unnecessary war, there is a clear bad guy, and serious decisions have to be made, which is why there was a lot of pushback and even backlash from a lot of countries, people, and most notably the internet in the form of memes. 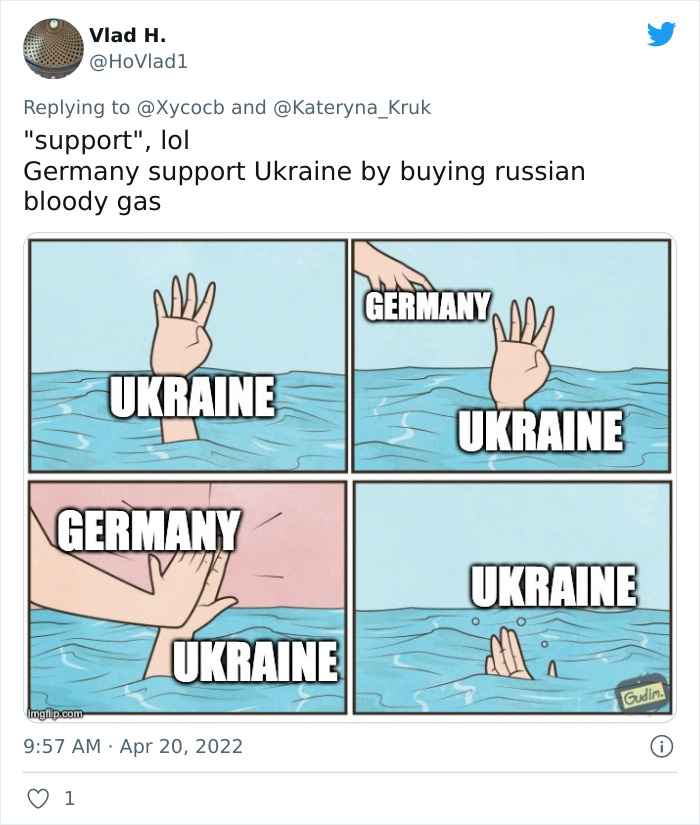 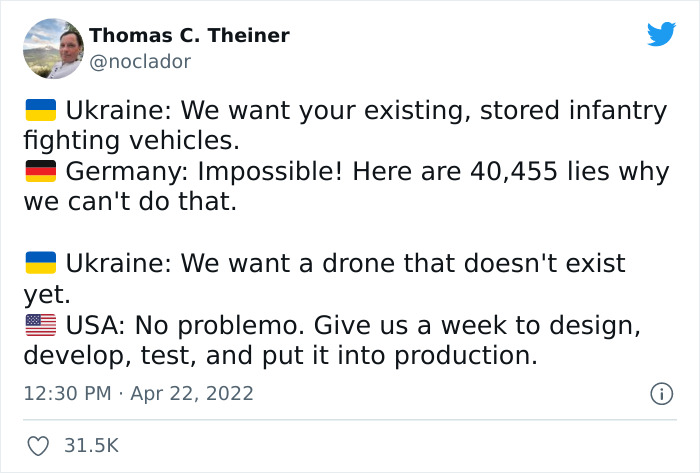 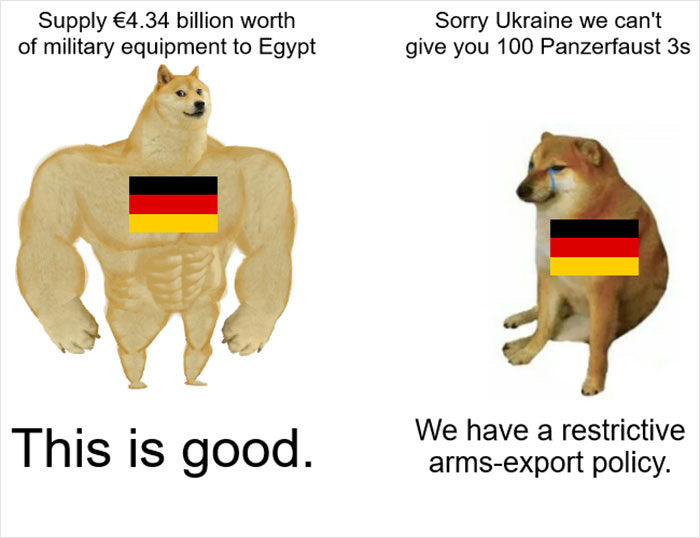 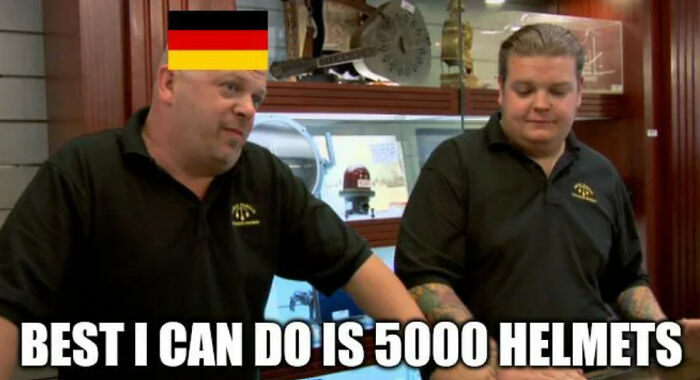 For the most part, the memes revolved around the whole helmet scandal, which, sure, is great, but far from enough. There were also those who pointed out Germany’s hypocrisy of how it’s throwing billions of dollars at Egypt, yet sending 5,000 helmets to Ukraine. And yet other memes revolved around Germany’s support efforts equating to a pat on the back.

To give you a rough understanding of how much support other countries have pledged: the UK’s MP said its military aid to Ukraine may rise to £500M, the US has confirmed its $131M commitment for resilience as well as socioeconomic growth, and the entire European Union has allocated a total of €143M so far. 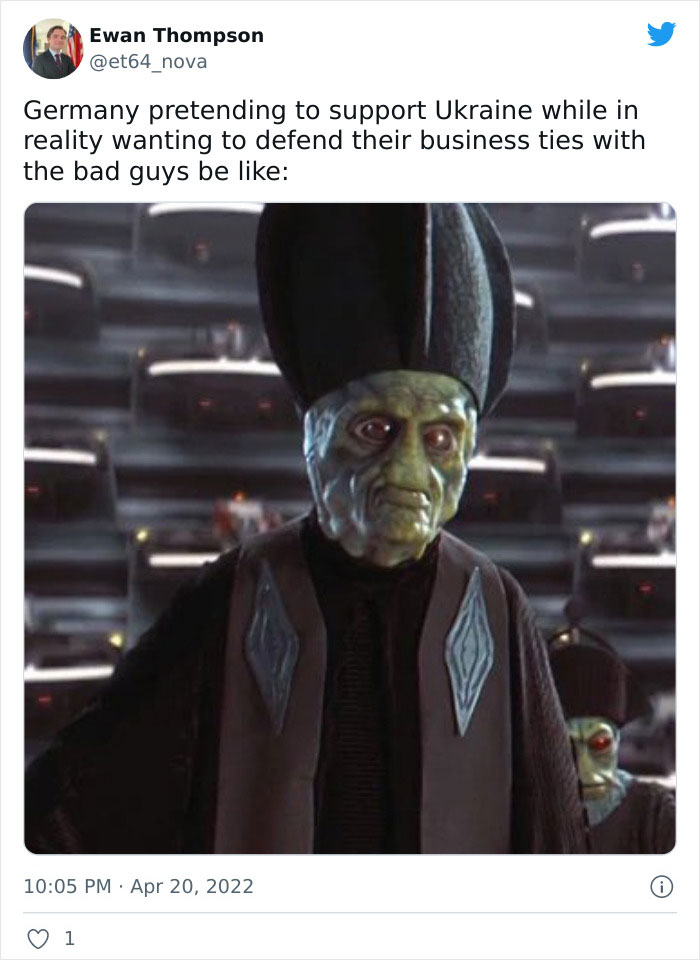 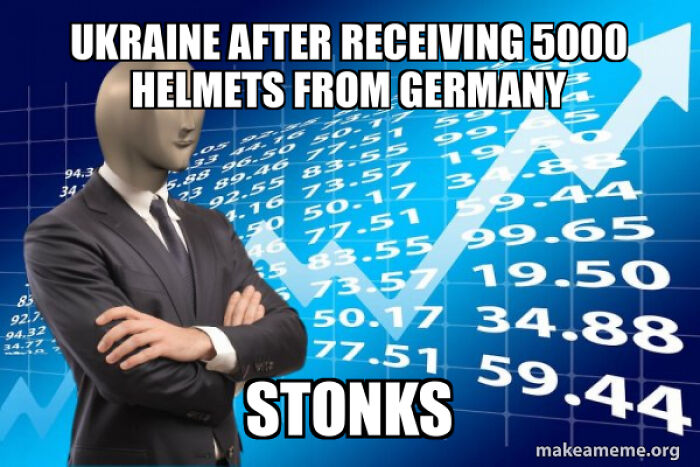 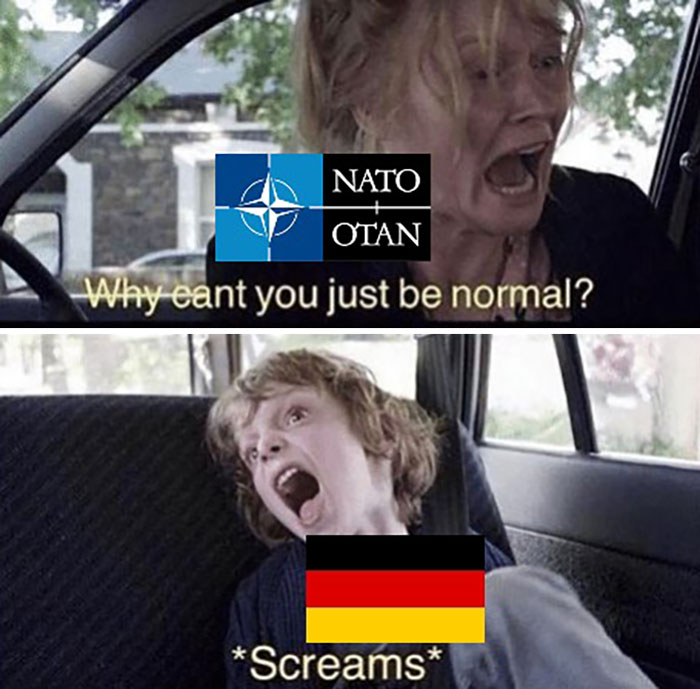 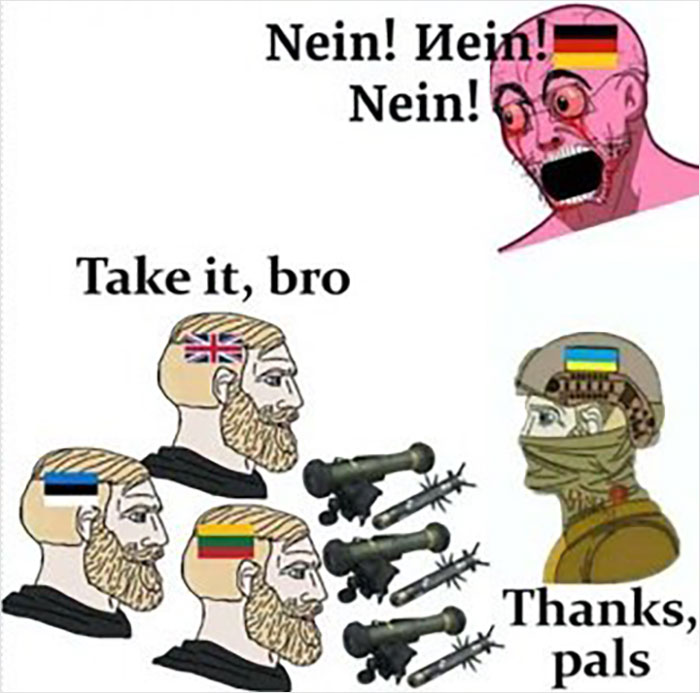 And this is besides all of the numerous sanctions that countries are imposing on many of Russia’s government officials, businesses, and industries.

Besides all of the internet’s mocking, the Mayor of Kyiv also called Germany’s 5,000-helmet project a joke, after they have explicitly asked for arms.

But it took several months to annihilate Germany’s hesitation as it now being reported that Germany plans to increase its military aid fund to €2 billion, of which a large portion will go towards the war efforts in Ukraine, and it also greenlit the provision of heavy arms, specifically anti-craft tanks. 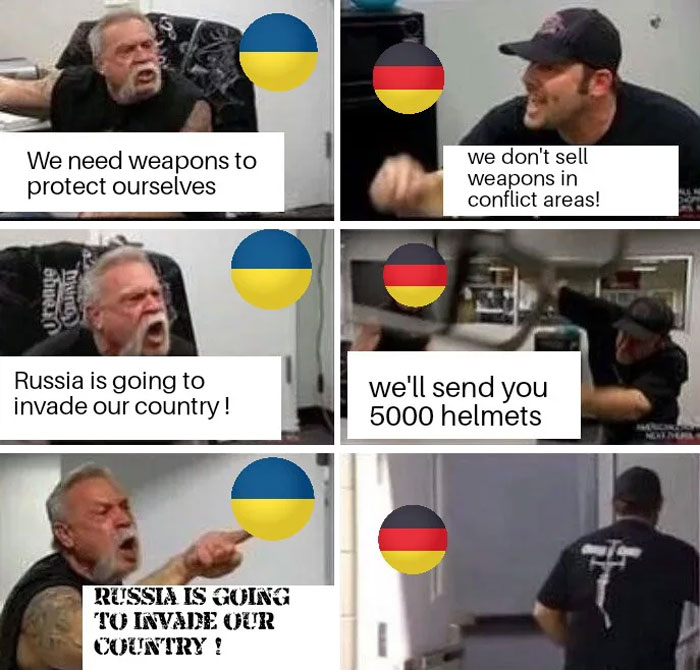 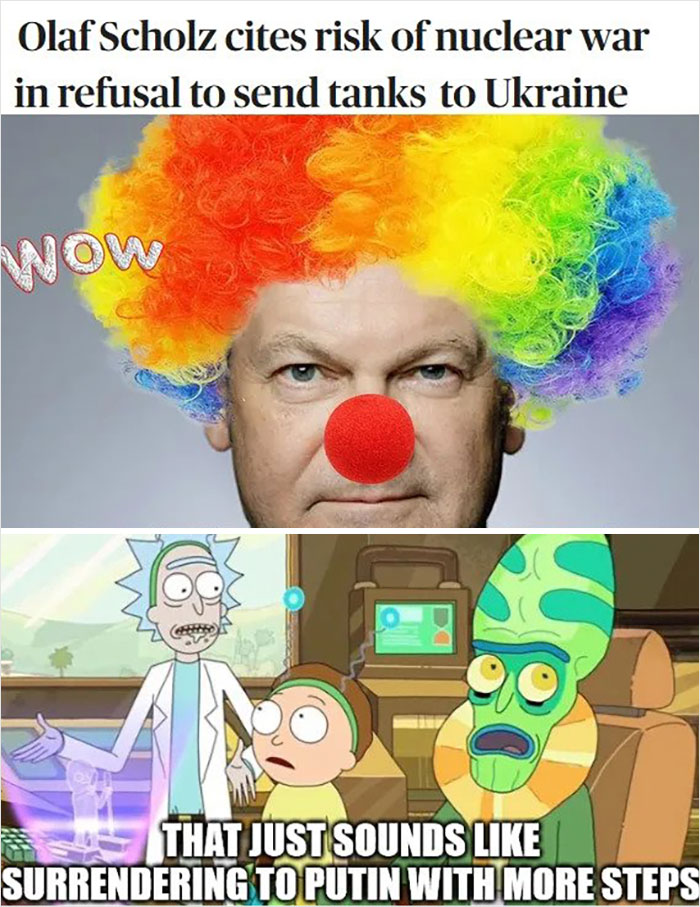 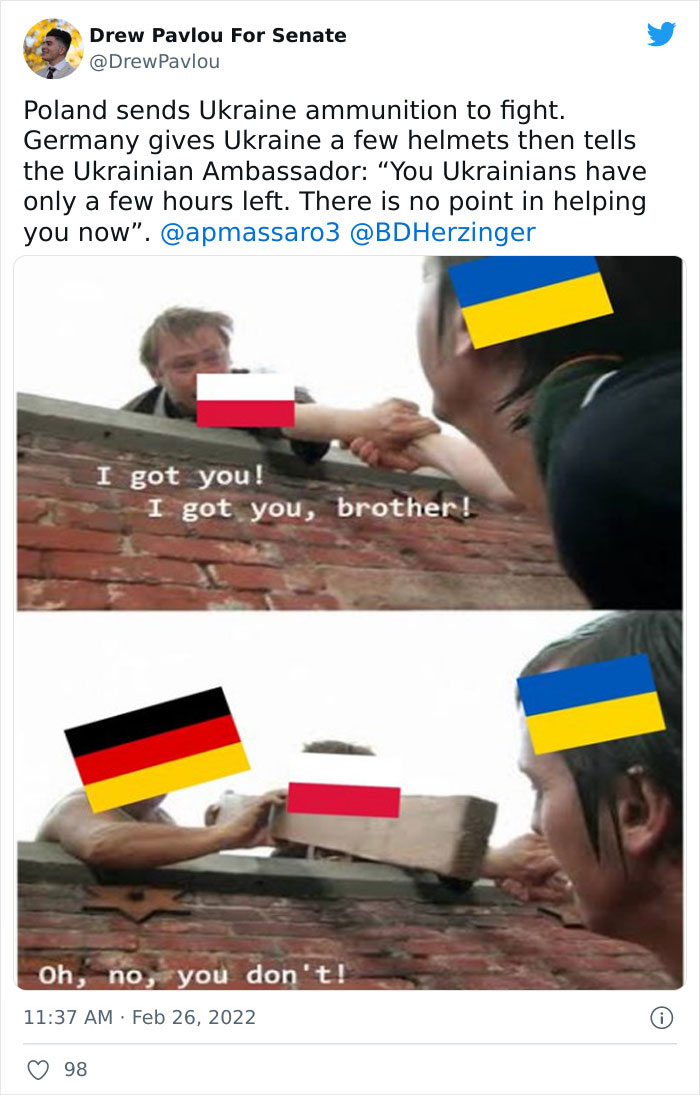 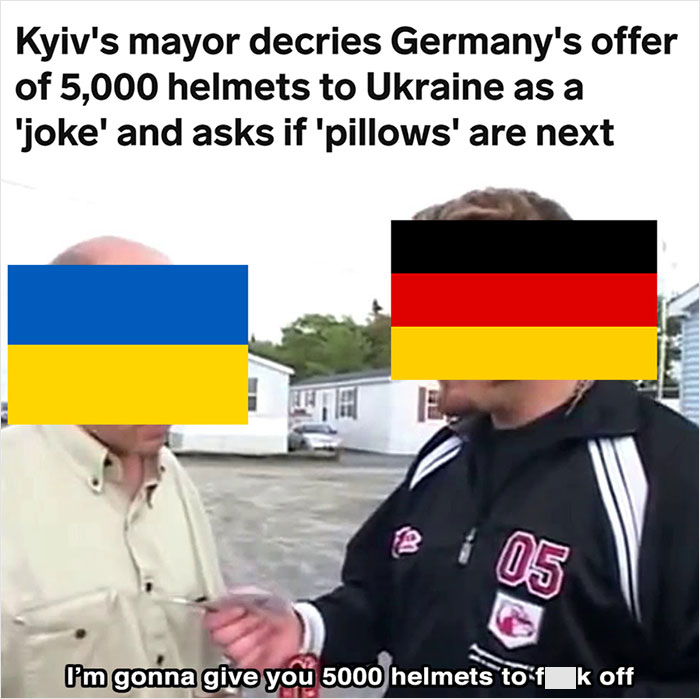 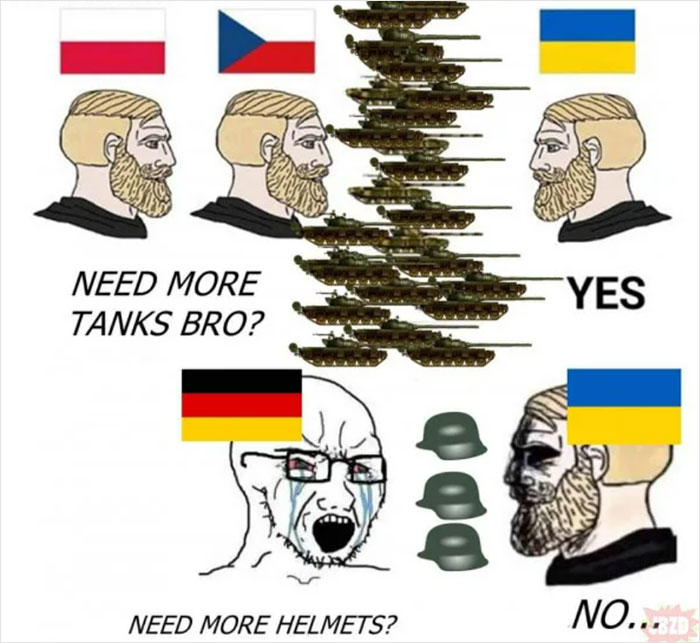 Germany’s Defense Minister Christine Lambrecht pledged to provide “Gepard” anti-craft systems during the international defense officials meeting at the Ramstein US Air Force base in Germany.

“We decided yesterday that we will support Ukraine with anti-aircraft systems […] which is exactly what Ukraine needs now to secure the airspace from the ground,” explained Lambrecht. 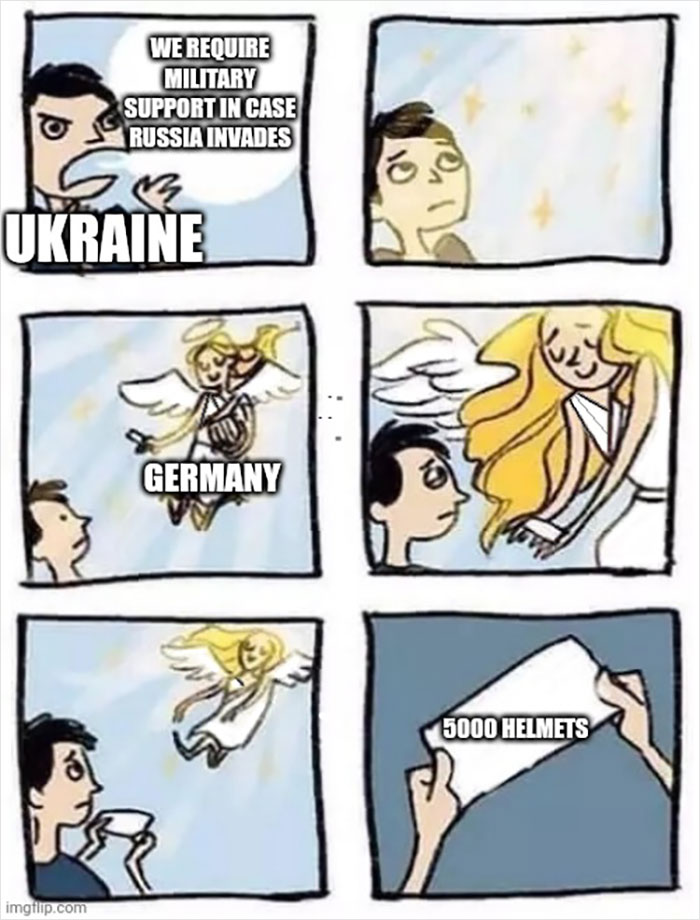 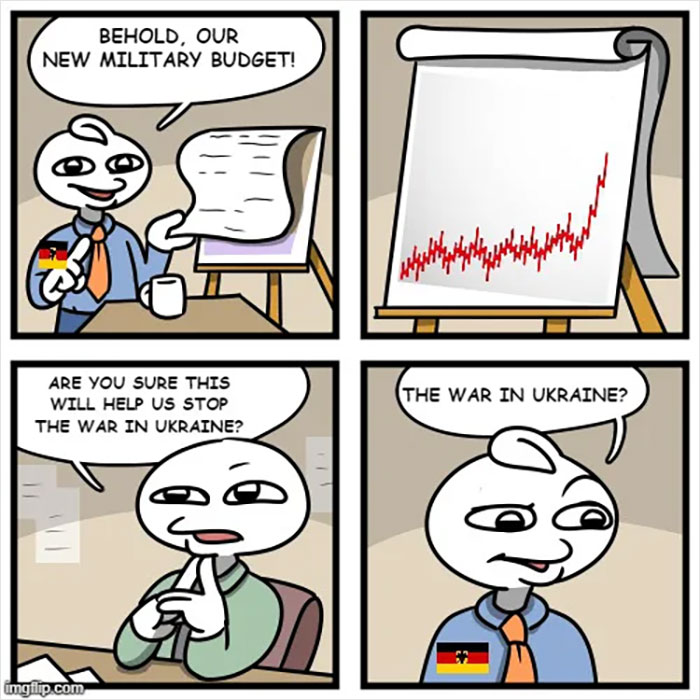 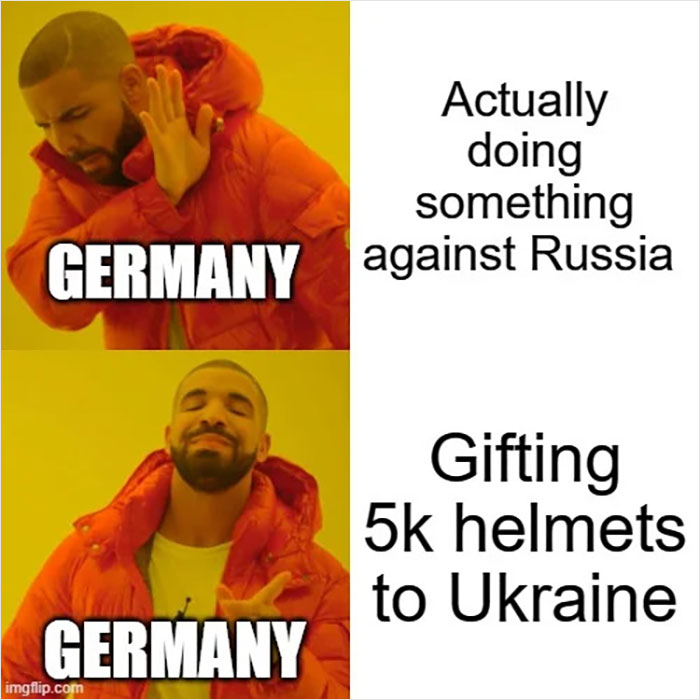 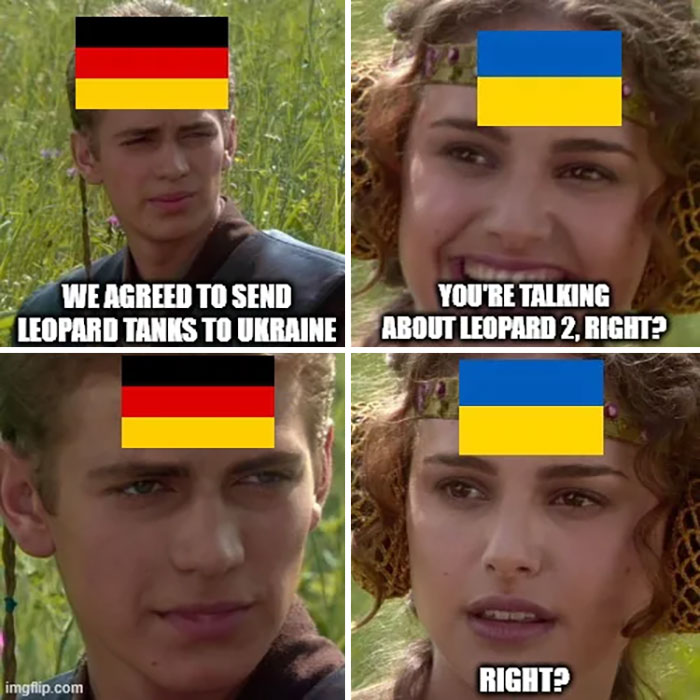 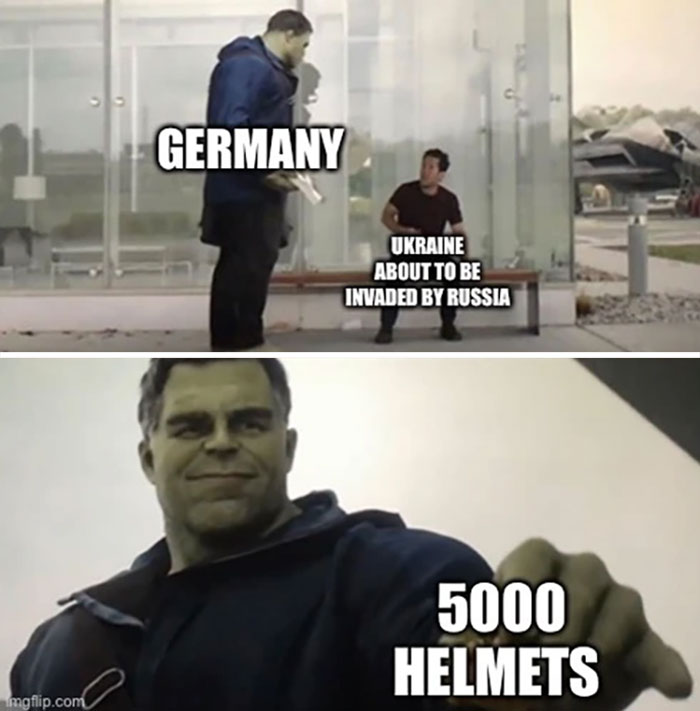 So, what are your thoughts on this? Whether you want to play the devil’s advocate, or add your own meme bashing Germany and its helmet pledge, all opinions are welcome in the comment section below! 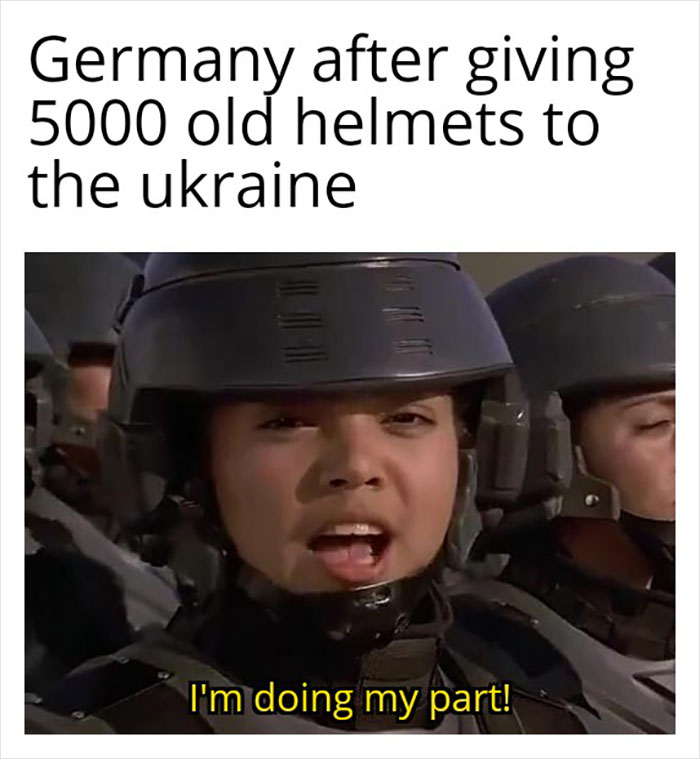 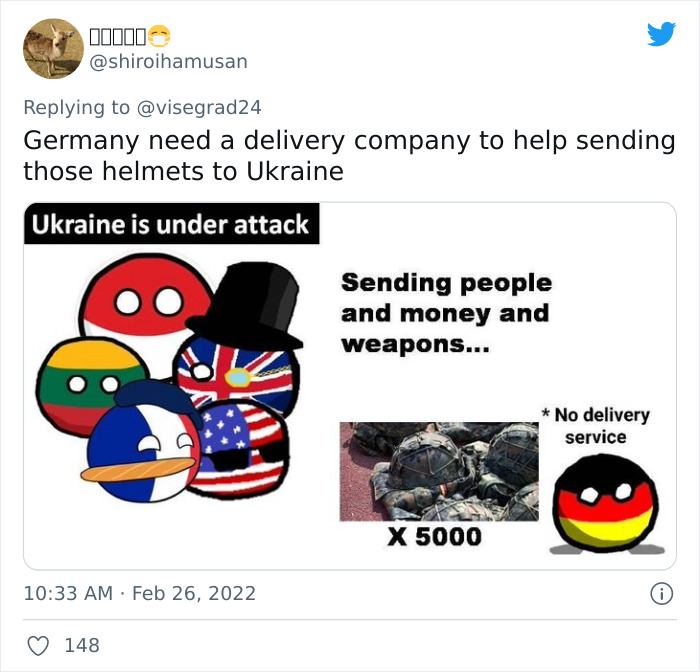 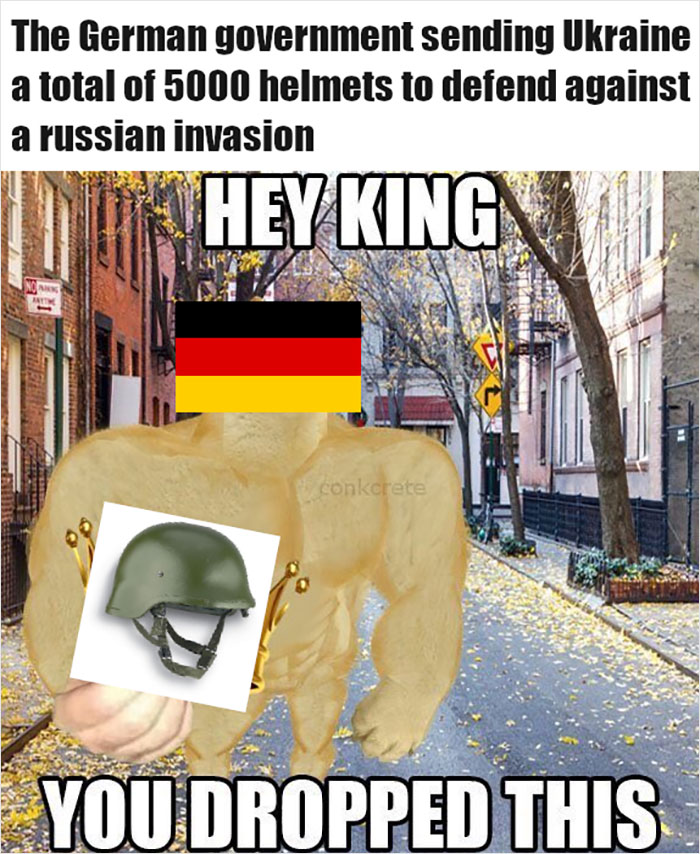 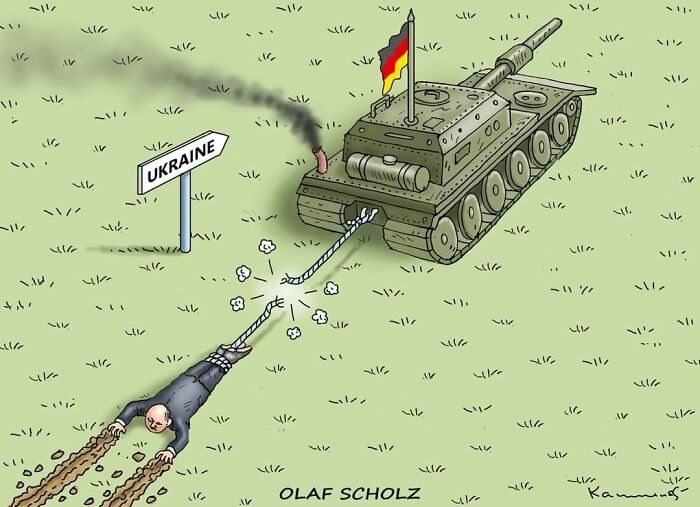 Image credits: Solidarity with Ukraine – Europe is not silent 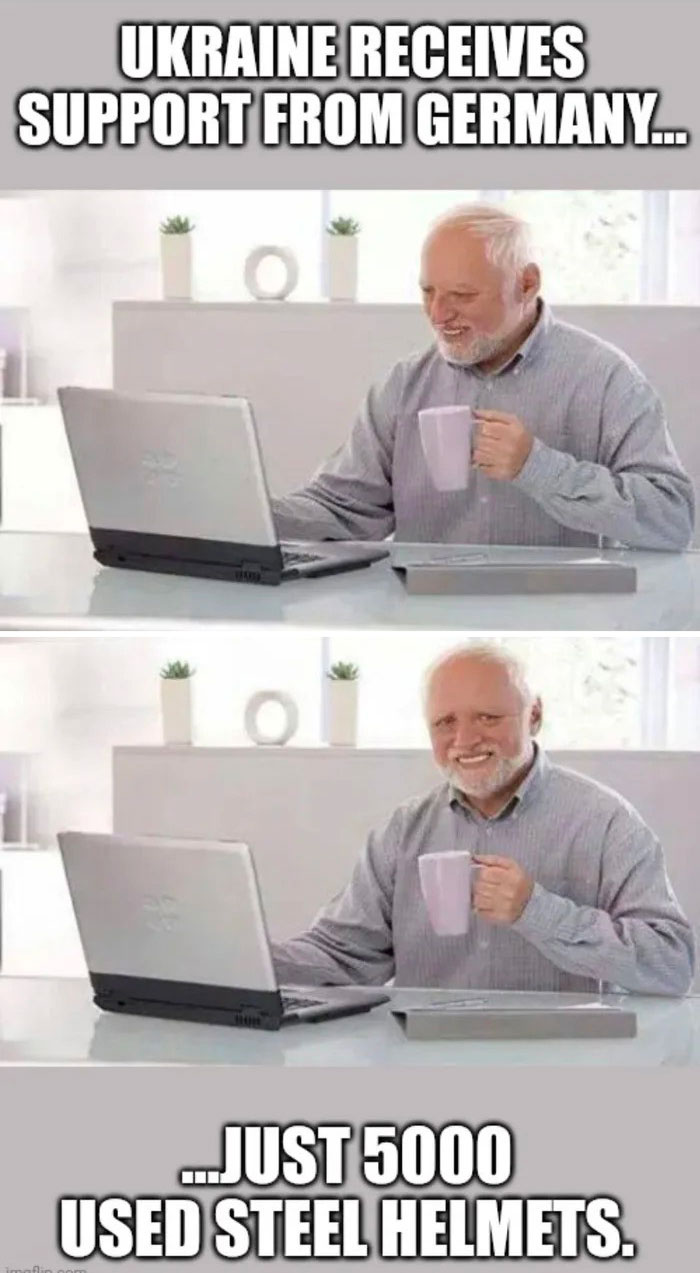 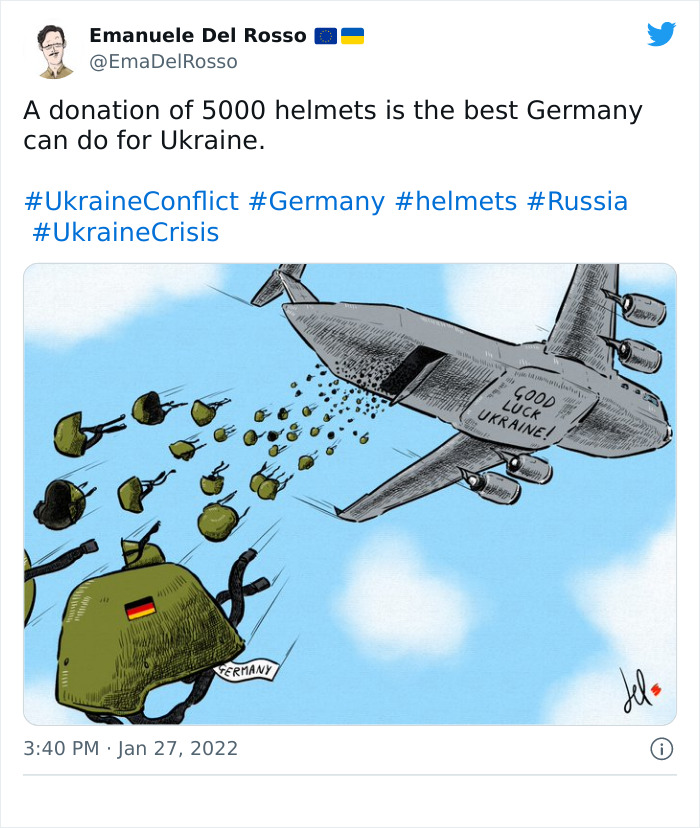