One thing we humans are designed for is to be excellent at walking. The way our bones and muscles work together to efficiently propel us forward is fascinating in its own right. And this mode of transportation can lead us to some incredible places: up a mountain, down a stream, into a volcano, etc.

Yet, as we get more used to sitting, taking the bus or scooter, and avoiding using our legs for longer than necessary as our shoes are in the process of rubbing out a sore in our very delicate left foot, the skill becomes rusty, and so do our joints. But isn’t that the natural progression of things? We just get old and move less?

Whelp, it doesn’t have to be so! 71-year-old Pa’at is here to show us that we can achieve great things despite our age using the very thing we’re all decently good at—walking. Up mountains. And down streams. And the rocky paths of the Pacific Crest Trail, ranging 2,650 miles. You get the idea, let’s get into the details! 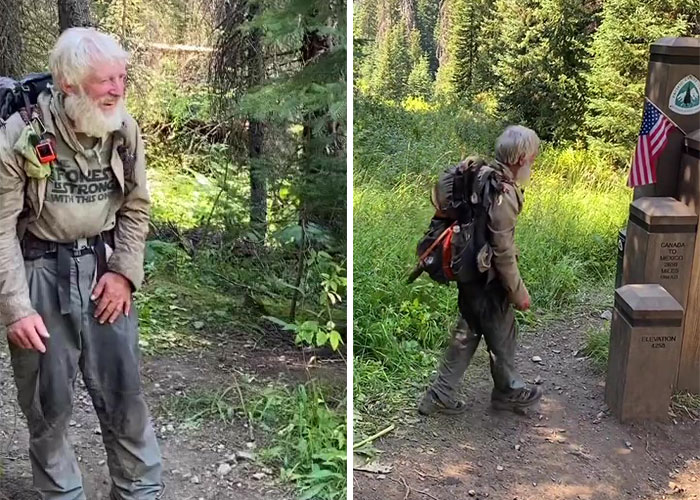 Don’t you just wish that you could drop all your responsibilities, take all your savings, and go hiking in one of the most beautiful places in the world? Spanning around 2,650 miles, starting next to the Mexican border in Southern California and leading all the way to the Canadian border in the state of Washington is the Pacific Crest Trail, the US west coast’s greatest footpath.

Although the views seem incredible—from icy top mountains to fields of flowers, deserts, forests, volcanoes, streams, pretty rocks—the journey is not one for the faint of heart. These pretty sights make the trek especially challenging, due to altitude changes, inconsistent weather, and temperature shifts. Not to mention that completing said trail would take you anywhere from four to six months of backpacking.

As he stepped forth, the man sang: “I’ve been waiting… such a long time. Walking such a long way just to be here. Just to see you” 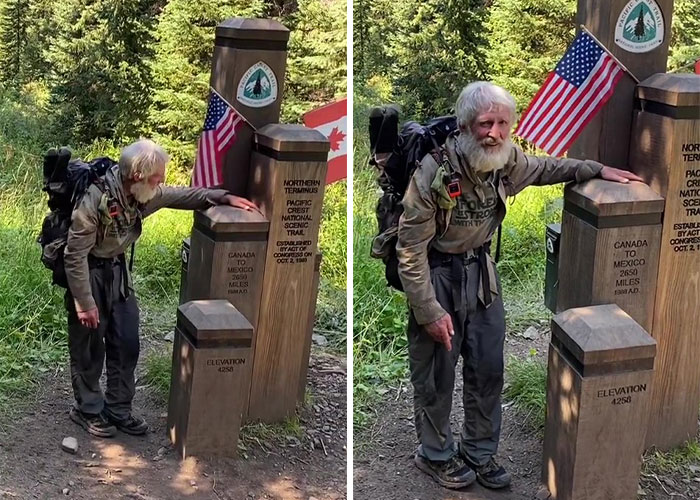 Nothing deterred one inspirational man, named Pa’at, who at the beautiful age of 71 completed the full trail. Fellow hikers Auti and Chris documented his last steps to the finish line, the man singing, “I’ve been waiting… such a long time. Walking such a long way.”

His 5 and a half month journey was completed—one that started on March 17 and ended on August 30, his wife walking 1,800 miles alongside him in the beginning 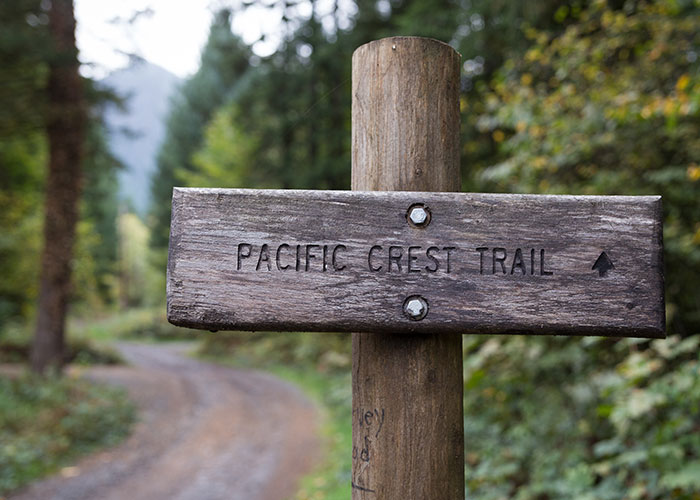 The pair, who’d been hiking the trail themselves, met up with Pa’at near the very end. They posted a fragment of his incredible story on Instagram, the post reading: “Not many people can say they’ve accomplished such an incredible feat–especially not at 71!”

“We didn’t meet Pa’at until Stehekin, only 80 miles from the northern terminus, so we only knew him a few days before finishing, but he’s one of those people you instantly feel like you’ve known a lifetime.” 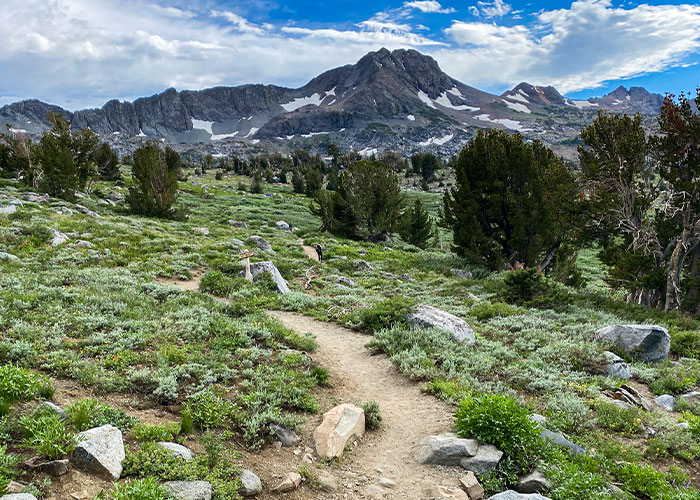 “He has a heart of gold, the kindest soul, and unmatched optimism and fortitude,” the post continued, ending with a short message of gratitude: “Thank you for being such an inspiration to us, Pa’at!” His 5 and a half month journey was completed. One that began on March 17 and ended on August 30, his wife doing 1,800 miles alongside him.

Ever since being posted on September 2, the video has garnered over 650k views and 45k likes. It’s been posted on various other social media platforms, with one post on Twitter reaching 2.8M views. Hundreds of people were astounded by the man’s vigor and strength, both emotional and physical.

Auti and Chris, who’d been hiking the trail themselves, met up with Pa’at only 80 miles away from the end point, spending a couple of days traveling together 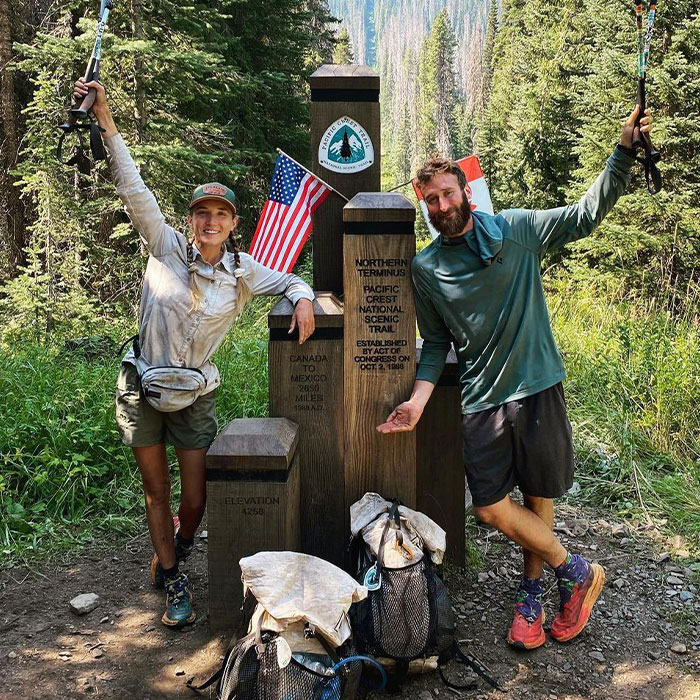 “Wonderful to see someone fulfilling his dream. The honest emotion is very inspiring,” one said. “That’s so awesome. What a great soul! How fun it would be to cross paths with him for about a week or more on a trail,” said another.

Others made jokes that made me giggle. “He was 23 when he got started! Maps and compass, people!” said one. “Here I am out of breath going up 2 flights of stairs…” remarked another. Lastly, one even made up a special scenario fit for a Netflix show: “Oh, everyone knows this dude. He waits a few miles out to give his story that he walked the entire thing. He’s always fooling some LA kids. Us locals know him as Phil.”

They shared his story on Instagram, the caption reading: “Not many people can say they’ve accomplished such an incredible feat–especially not at 71!” 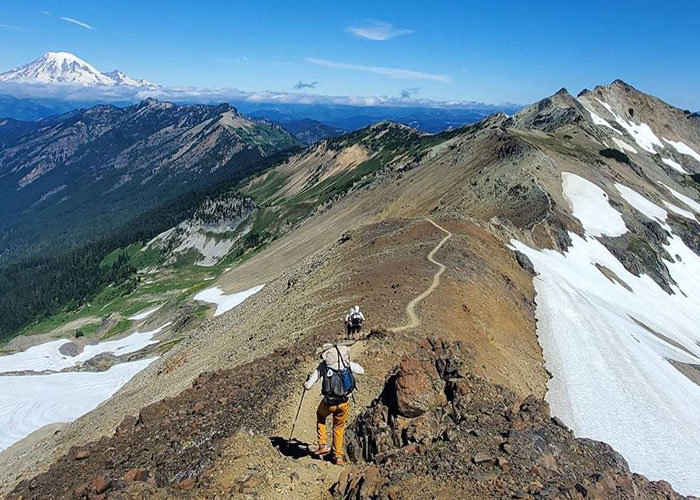 It is believed that hundreds, if not thousands of people take on the challenge of the Pacific Crest Trail; however, according to the Pacific Crest Trail Association (PCTA), only 8,871 people have completed the trail, with 107 doing it more than once. The numbers may differ in real time, as one has to report the accomplishment on the PCTA’s alumni page and many may not know of such a feat.

Regardless of that fact, The Wall Street Journal reported that only about 14% of people who attempt to conquer the trail finish the entire hike. Sean Jansen from Lonely Planet believes that it takes perseverance and passion to complete the Pacific Crest Trail. Of course, preparation can’t hurt either!

“He has a heart of gold, the kindest soul, and unmatched optimism and fortitude,” the post continued 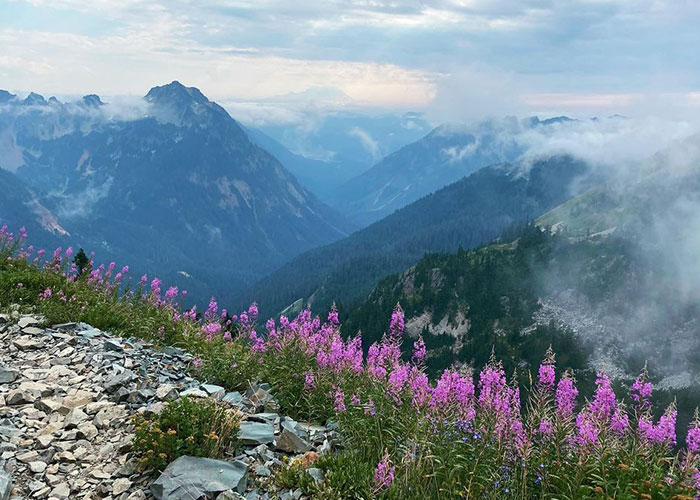 Preparation for the daily, or even hourly changes is vital, unless you’re interested in experiencing altitude sickness in the morning and heat exhaustion by the afternoon, as well as scorching temperatures in the day and below freezing at night. Not to mention all the random spouts of rain, sleet, snow, lightning, hail, and everything in between at any location on the trail.

There aren’t any beds scattered about the checkpoints, so you’ll probably be carrying a tent, a sleeping bag, and a sleeping pad. Of course, there are some tiny towns about, so the possibility of spending a night at a hostel or hotel is there, but not always. Sean also advises people to take caution if hitchhiking.

The video has garnered over 650k views and 45k likes. It’s been posted on various other social media platforms, with one post on Twitter reaching 2.8M views 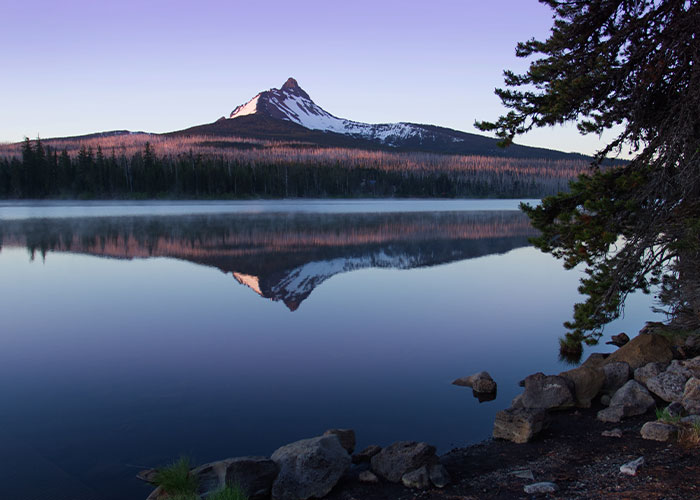 The PCTA recommends starting the journey from March to late May if you’re going south to north. If, however, you decide to go north to south, the start dates will depend on the snowpack in the North Cascades of Washington, though they range from early June to September. This will greatly impact permitting—yes, you need permits to hike.

You must apply for a permit through the PCTA. With a total number of 8,000 permits issued a year for the trail, planning your start date well in advance offers you the greatest chance of being able to experience the challenge of a lifetime. There’s also a fire permit you need to obtain so that you can make use of campfires and camping stoves.

It is believed that hundreds, if not thousands of people take on the challenge of the Pacific Crest Trail; however, only 8,871 people have completed it fully 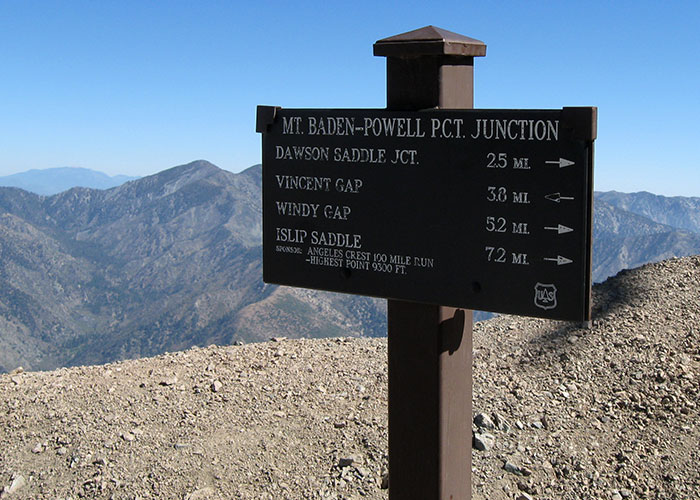 With all of this in mind, you can start preparing yourself for the hike. Physical exercises, such as yoga and trail running can prepare your body for the eight to 10 hours of daily hiking. After blisters, muscle tears are the most common setback for hikers, and stretching can prevent injuries.

Don’t forget to train your mind! The passion and perseverance it takes to complete the trail is often underestimated. You’re away in some strange place, surrounded by nature of varying beauty and difficulty, away from home, away from familiarity, and you’ve got to stay away for months on end, enduring challenge after challenge.

Whatever your reason for starting, hold on to it and use it as your personal drive if you hope to complete the hike.

Preparation can take longer than the trail itself, requiring the person to be both physically and mentally prepared for the challenges ahead 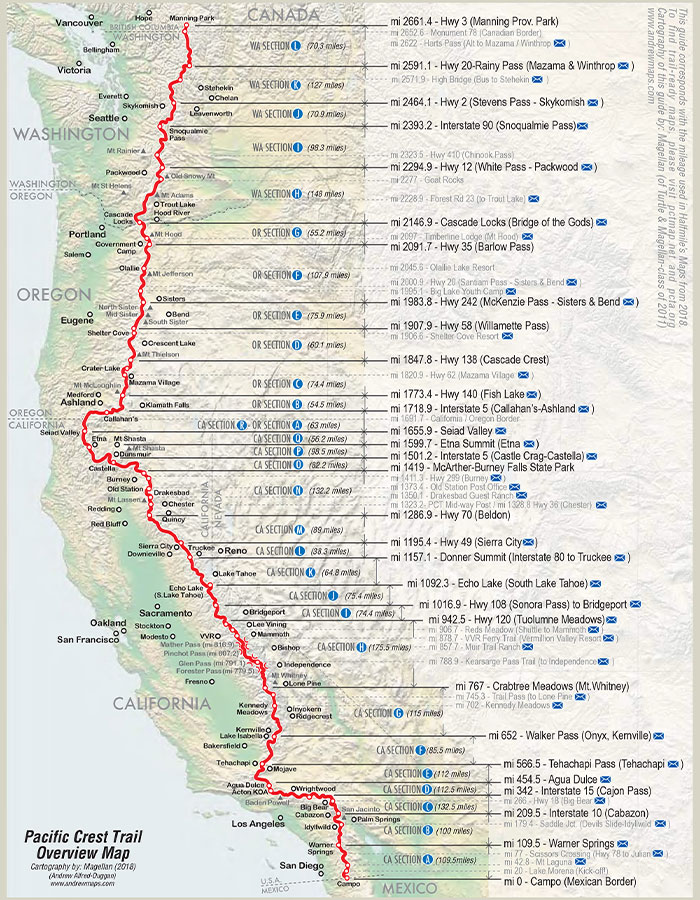 This is why the PCTA states that preparing for the hike often takes longer than the actual hike itself. Oh, it will also cost a lot more than you’re potentially imagining.

Considering all the gear, the travel expenses just getting to the trail, food, hostels, and other thingamajigs, you’re gonna spend a couple of thousand dollars.

We wish Auti, Chris, and Pa’at happy trails and hope that their paths connect once again in the future 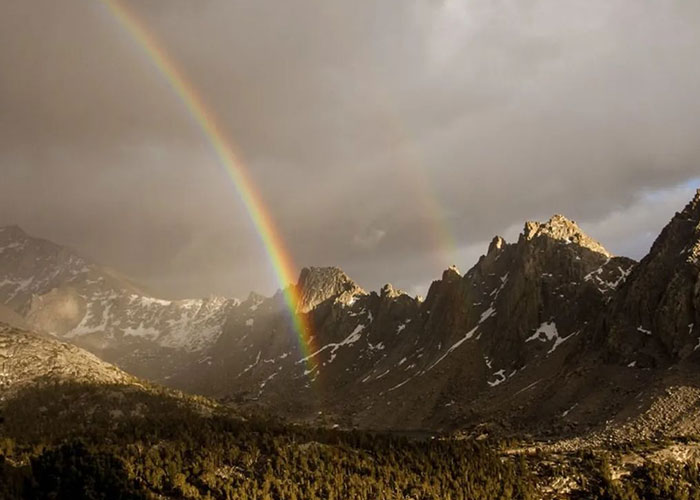 If you’re ready for the challenge, make sure you read up and prepare! It may be the adventure of a lifetime or enough nightmare fuel to last you a lifetime; it’ll all come down to you! We wish Auti and Chris all the best on their hiking adventures and hope that they come across adventurous Pa’at in the future!

If you’d like a closer glimpse at Pa’at’s journey, we came across his blog, to which I will leave the link here.

You can watch the full video and hear his song here

Let us know your thoughts in the comments below and whether you’d be up for the adventure. Don’t forget to upvote and follow the author, and I shall see you in the next one!

People have been in awe of the mighty feat accomplished by Pa’at at his age, with some offering some witty jokes. Let us know your thoughts in the comments!