At a wedding, most family members work hard to accommodate every last request the bride and groom have. After all, it is their day, and they have worked hard to plan a beautiful ceremony and an exciting party that everyone else gets to enjoy. But it is assumed that the happy couple also respects all of their guests. Once they start misgendering and deadnaming a family member, all bets are off. Guests are no longer responsible for catering to their every whim.

Last week, Reddit user Daddofthree told the story of how he and his sons stormed out of his sister’s wedding after she deadnamed one of his sons. After being told that this scene “ruined the wedding”, Daddofthree reached out asking if he did anything wrong in the situation. Below, you can read the whole infuriating story, as well as some of the responses from heated readers who might have done a lot more than simply storm out. Let us know in the comments how you would have reacted in this situation, and then if you’re looking to read another Bored Panda piece detailing some of the struggles trans people have to deal with every day, click here. 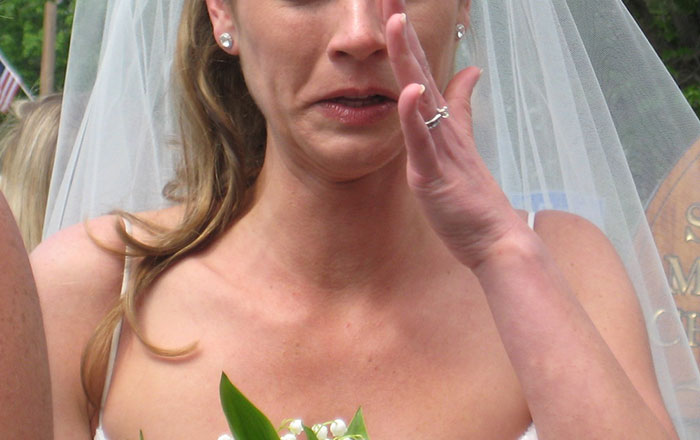 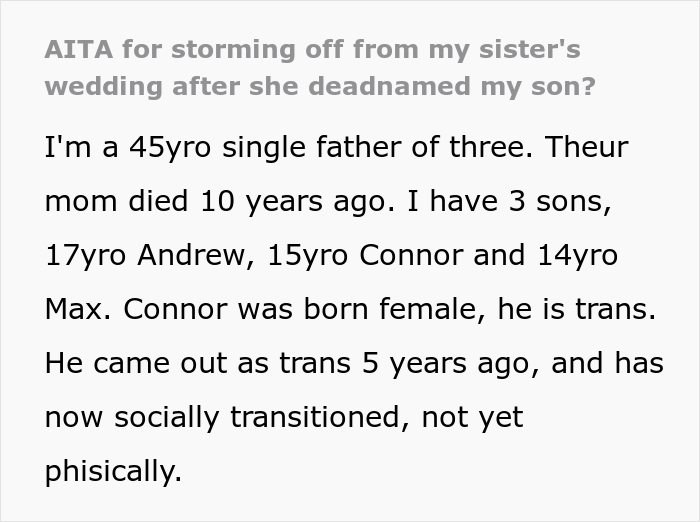 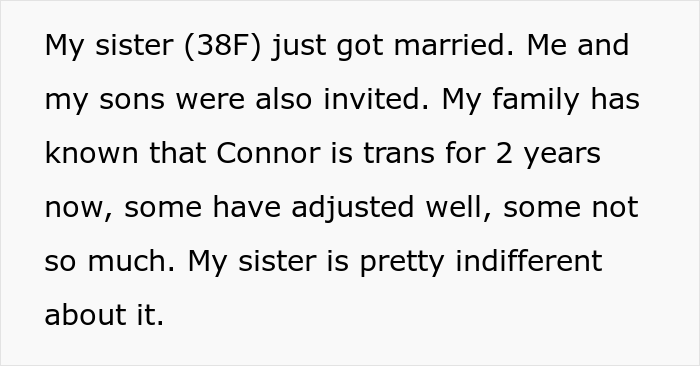 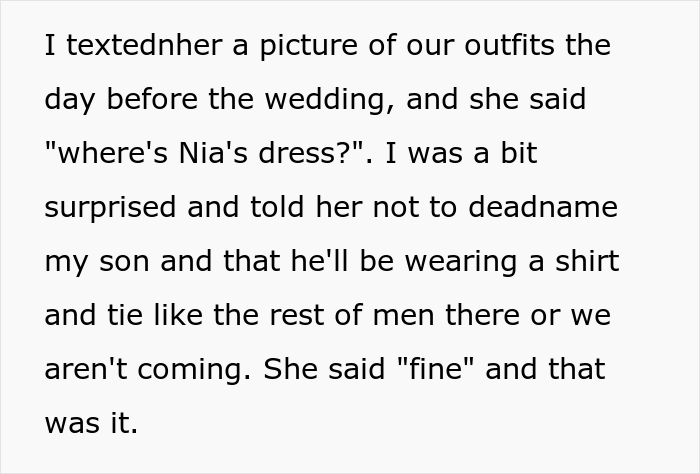 Despite knowing for 2 years that her nephew is trans, the bride refused to respect his gender and name 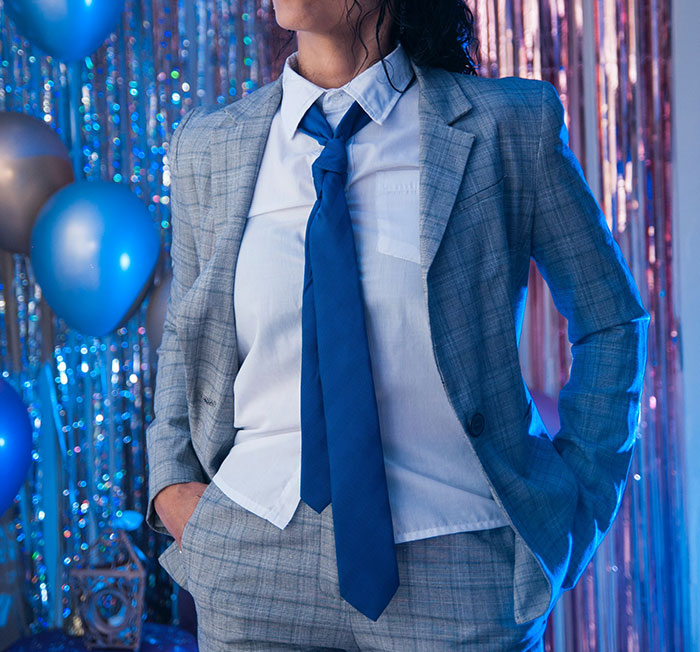 It takes a great amount of courage to transition, especially at a young age, so it’s heartbreaking to hear that this aunt would rather deadname her nephew than accept him with open arms. As a cis person, she probably assumed that a name does not carry much weight, but I wonder how she would respond if someone started calling her by her husband’s or brother’s name instead. Aside from simply being disrespectful, deadnaming can be incredibly harmful for trans individuals. Child and adolescent psychiatrist Dr. Jason Lambrese told the Cleveland Clinic that deadnaming, or using a transgender person’s birth name that they no longer want to be referred to as, can really take a toll on a person’s mental health.

“It can remind them of that period in their lives before they could take steps to affirm who they are,” Dr. Lambrese says. “Deadnaming might bring them back into those more negative times in their lives. And often, that gender dysphoria (distress that comes from one’s sex assigned at birth not lining up with their true gender identity) can be associated with depression and anxiety.” On the contrary, by affirming a trans loved one’s gender identity and calling them by the name they choose, we can help lower their risks of depression and suicidal ideation. Calling someone by the name they choose is such an easy way to help an individual feel loved and show them there is no reason to feel shame about their identity.

Nobody likes to be referred to by the wrong name anyway, regardless of whether they’re cis or trans. People get offended when a Starbucks employee misspells their name on a cup, and most of us don’t hesitate for a second to correct someone who mispronounces our names. We all deserve to be embraced for who we are; no one should have to defend their choice of pronouns or their name. Although the son in this story has not received full support from his extended family yet, thankfully, he has a loving father who would do anything to protect him and make sure he feels loved. We’d love to hear your thoughts in the comments below, and if you have any great comebacks to throw at transphobic family members, feel free to share those too. 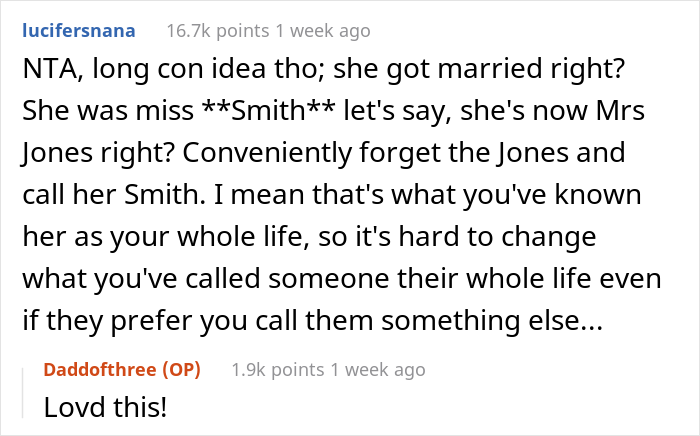 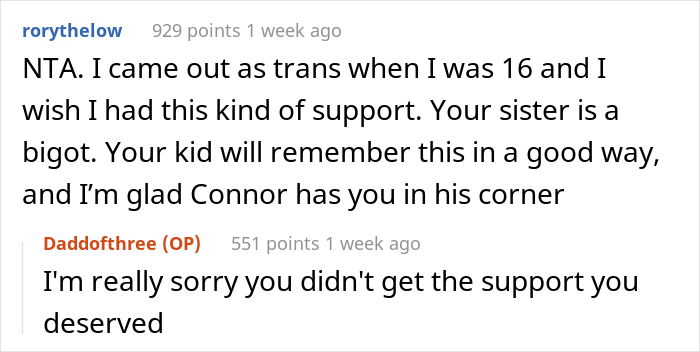 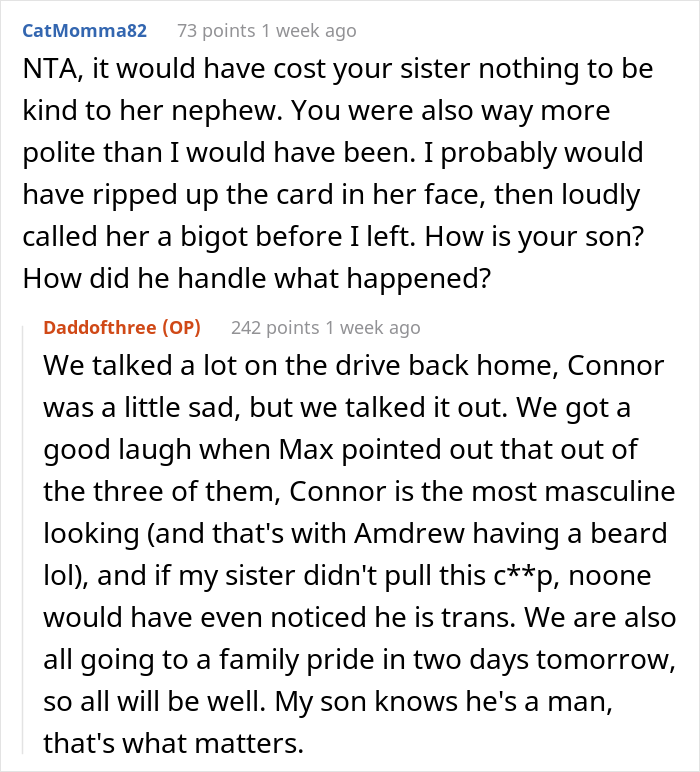 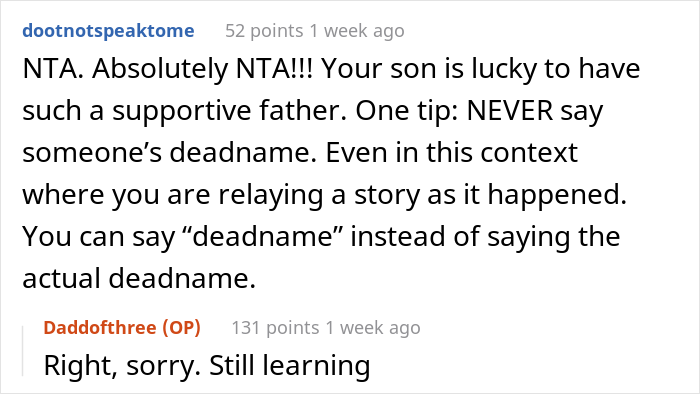 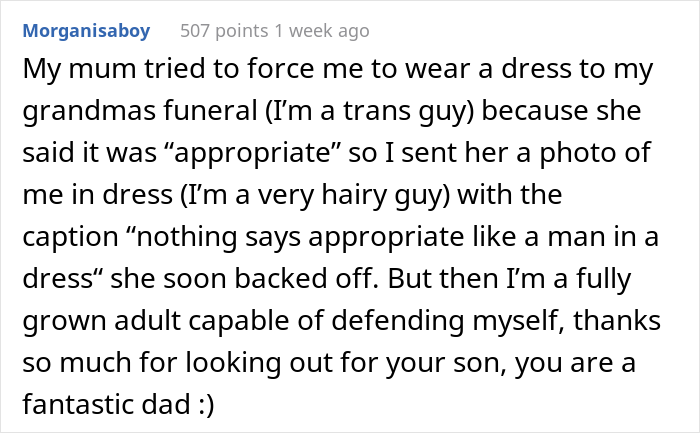 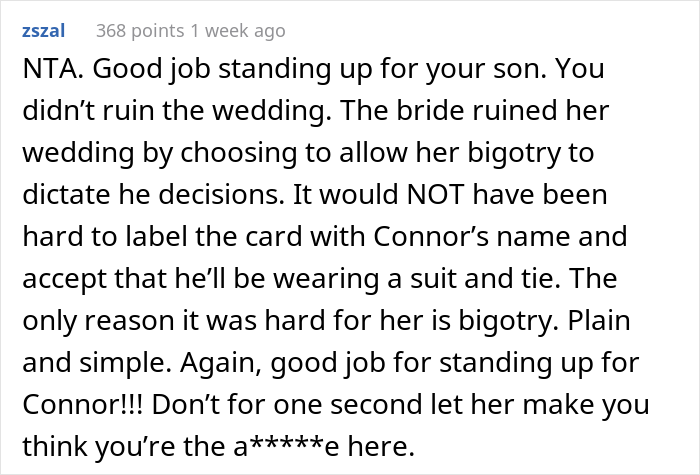 The post “Am I The Jerk For Storming Off From My Sister’s Wedding After She Deadnamed My Son?” first appeared on Bored Panda.