Have you ever had a dream so big, so glamorous, so exhilarating? One that makes your heart go pitter-patter? If you have, you’ll most likely know the loneliness that comes with it – your dream is only alive in your heart and mind.

The only way to achieve it is to run away in the pursuit of happiness. And then sit by the side of the road until a man stops and takes you to where your dreams will come true. This is what one little pupper decided one day, running away from home, only to return later that day with a rosette from a dog show. It is talent, it is grace.

Before we dive into the hilarious story, I’d like to ask you, dear reader – what’s your dream? I’d like to know. If you wanna know mine, all you have to do is ask in the comments. Your upvotes and follows are highly appreciated, but enough of this – it’s story time!

Bonnie, a five-year-old beagle-cross, decided to head out on a little adventure, causing her dog-parents, Peter and Paula Closier, quite a bit of stress 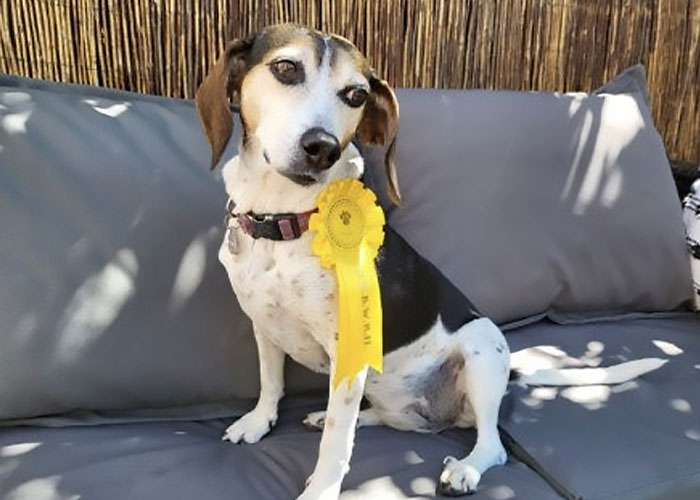 Bonnie, a five-year-old beagle-cross, decided that life was more interesting outside the fence of her home in Bolney, West Sussex, so she skedaddled away as soon as she saw an opening. Her dog-parents, Peter and Paula Closier, didn’t find the situation amusing whatsoever.

They noticed their pup missing Sunday morning, July 10. They told The Argus that they were in the middle of preparing food for Bonnie and their other dog Cleo when she disappeared. “We thought maybe she is not interested in food and did a full search of the house. I could not see her,” Peter said. “I was walking back to the kitchen when I saw the gate had swung and I thought ‘oh no.’”

A search party, made up of their two daughters and neighbors, quickly gathered together to find the missing dog. Peter and Paula even called the police, local vets and dog warden in a desperate attempt to find their beloved Bonnie.

Three hours later, there was still no sign of her. “We were frantic as we live right by a main road. Bonnie used to be a street dog and we were so worried she wouldn’t have known to come back,” Paula explained to the BBC.

“I was walking back to the kitchen when I saw the gate had swung and I thought ‘oh no,’” Peter said. They gathered a search party but couldn’t find her for hours 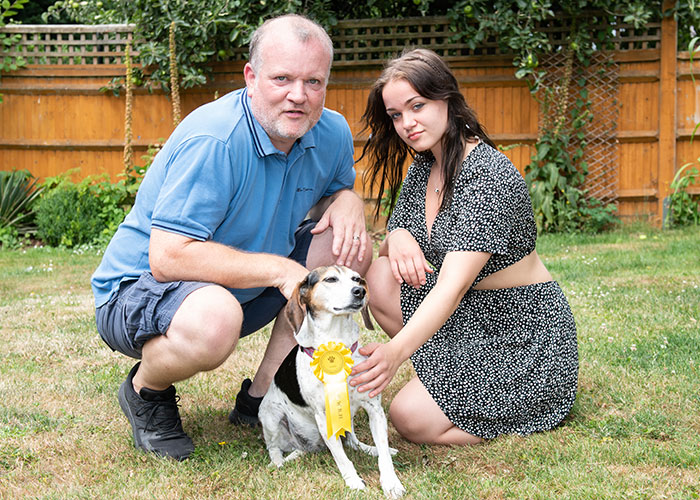 While the humans were in a panic, the pup was calmly chilling on the side of said road. John Wilmer, who was on his way to a dog show in Felbridge, Surrey, with two dogs of his own, spotted Bonnie just minutes after she ran off and decided to stop by the lone pup.

He decided to take to Facebook in order to find Bonnie’s owners, writing in a post: “Does anyone know this dog?” Soon the family’s worries were a thing of the past as they reached out to John. Once he reassured Peter and Paula that their dog was safe, John decided to enter her into a competition for best rescue dog alongside his two dogs.

“She was such a lovely dog, I thought it’d be good to enter her,” John told the BBC. “I was in a bit of a rush to get there when we found Bonnie and put her in the car,” hence why he couldn’t bring her straight back to her family.

John Wilmer was on his way to a dog show with two dogs of his own when he spotted Bonnie sitting by the road, minutes after she’d run away 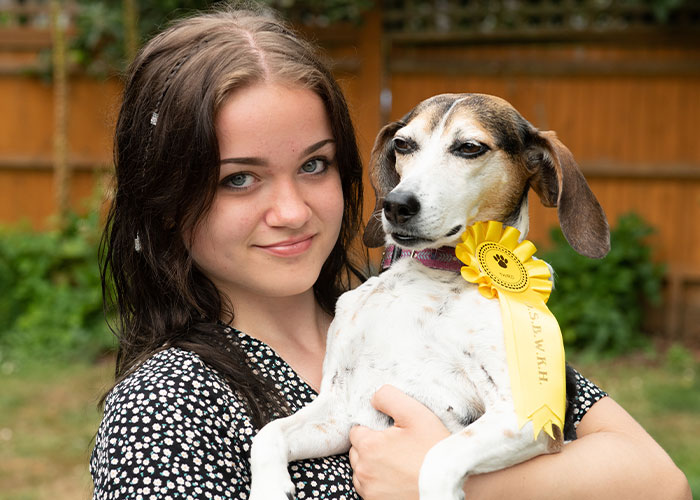 And what do you know – she finished with a third place rosette. “We couldn’t believe it. You could not make it up,” Peter said, as he recalled his pup arriving home with a prize. “Bonnie was absolutely fine when she got back. She just thought she was having a great day out.”

Bonnie was rescued from the streets of Crete when she was one year old. Cleo, who was also rescued from the Greek island, has won three rosettes at dog shows for Greek dogs. It seems Bonnie just wanted to see what the shows were all about as she’d never been in one before.

“We never pursued dog shows with Bonnie. We should do it now,” Peter said. “When she was missing I had five different outcomes in my head, the best being that she came back. This was even better than that, she came back with a rosette.” Paula added jokingly: “It’s a shame she didn’t come first in the show.”

He posted a picture of her on Facebook, which led to Peter and Paula finally finding her. John decided to enroll the well-behaved pup into the dog show as well 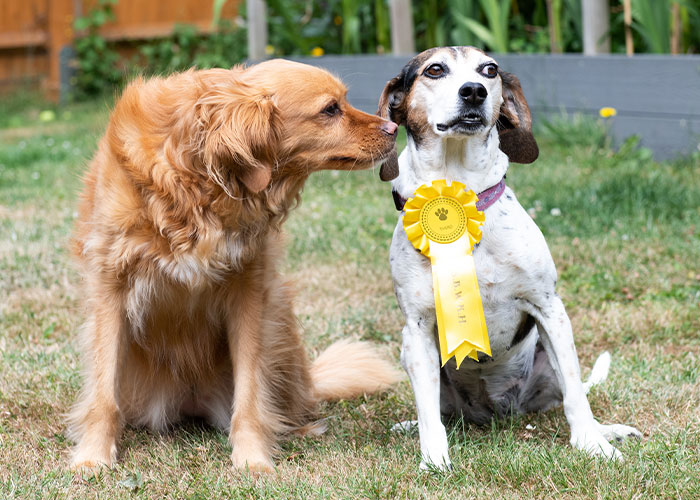 Although this story is humorous and wholesome, the fear that comes with a pet running away is no joking matter. Family Handyman explained that the search should start as soon as you notice your pet gone. If they’ve only been gone for minutes, chances are they’re still close by, just as Bonnie was.

They suggest opening all gates and putting food out to entice the K9s back. Use positive recall words to lure them, like ‘peanut butter,’ or if your dog loves car rides, start your car and gun the engine a little. While you’re out searching, think strategically – pups tend to end up going to familiar places.

But if an hour goes by with no pup in sight, get on the phone and alert every shelter and kennel within a 60-mile radius of your home. Call your local animal control and police department, as patrolling officers will be able to keep their eyes out. Make sure to provide these agencies with an accurate description and a recent photograph of your lost dog.

The first-timer came back home safe, sound and donning a third place rosette. One thing is for certain – Bonnie is a talented little lady! 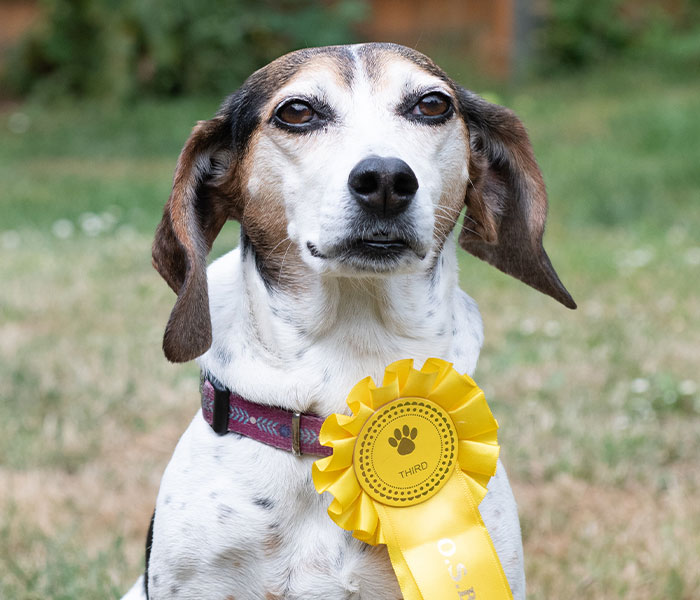 Speaking of pictures and descriptions, make sure everyone knows of the situation at hand via social media and flyers. Gather up a search team and give them dog treats, as well as a photo of the dog, and advise them not to chase them, as that can encourage the pup to run.

Of course, prior preparation will make the search a lot easier. ID tags, microchips, and Smart collars may become your best friend. But even without all this, the likelihood of finding your dog nice and safe is high.

Most importantly, as Amber King of iHeartDogs says, don’t panic as it will only work against you. We wish Bonnie and her family all the best and can’t wait to see all the wonderful things she will accomplish in the future. One thing is for certain – Bonnie is a talented little lady!

Hope you all have a fabulous day and see you in the next one!

People loved this story! Let us know your thoughts in the comments! 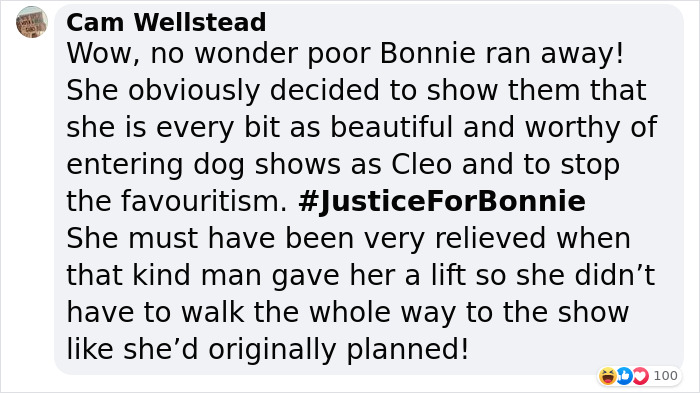 The post Dog Runs Away From Home And Returns With Dog Show Rosette first appeared on Bored Panda.