Traditionally when a couple gets engaged, the man will buy a diamond ring that symbolizes a promise to get married. Usually it’s a diamond ring and people tend to spend quite a lot of money on it to demonstrate their infinite love.

A Reddit user who named his account throwaway1578650 actually spent $20,000 on a diamond ring, but his fiancée was not impressed. When she found out that it was a lab-grown diamond, she refused to accept it and asked for a ‘real’ one, but the man is not willing to do that. It led to the couple getting into an argument so the Redditor is asking if he should concede. 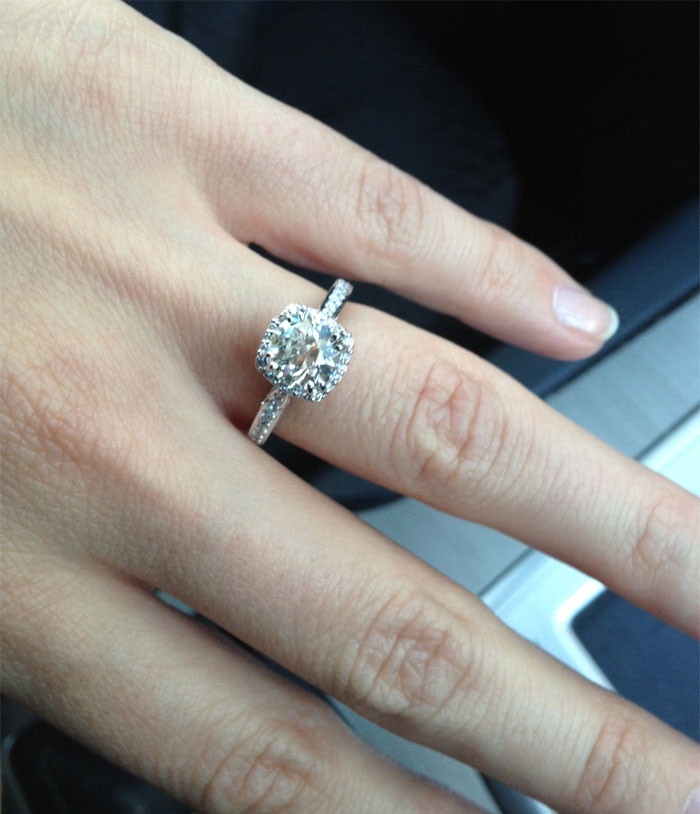 The Original Poster (OP) and his girlfriend have been together for 5 years and he thought it was time to become engaged. He proposed and the girlfriend became his fiancée. Everything seemed fine, they were happy but the fiancée was curious how much money the OP spent on the ring.

He didn’t hide it and said it cost $20,000. He has been saving this money for 10 years, though it was originally meant for a kit car; however, he decided to invest it in the relationship, as the fiancée wanted a small wedding, so he thought it was worth splurging on the ring. Also, they both work as MDs and their financial situation is pretty stable. 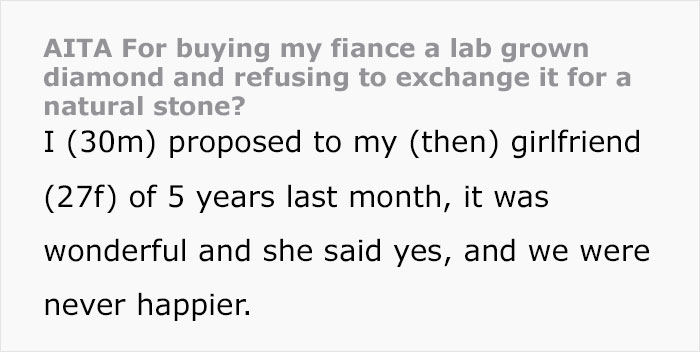 The OP searched for the diamond for several months and spent $20,000 on a 3.6-carat diamond

The fiancé was surprised that the Redditor had spent so much for her, but the ring was 3.6 carats, which would usually cost triple that amount, so she quickly became suspicious. The OP showed her the certificate that came with the ring that proved it wasn’t a fake.

What the certificate also proved was that the diamond was lab-grown which was a problem for the fiancé. She was seemingly upset as in her eyes it wasn’t a real diamond.

The fiancée was happy with it, but got suspicious when she found out its price as it was cheaper than other diamonds of this size 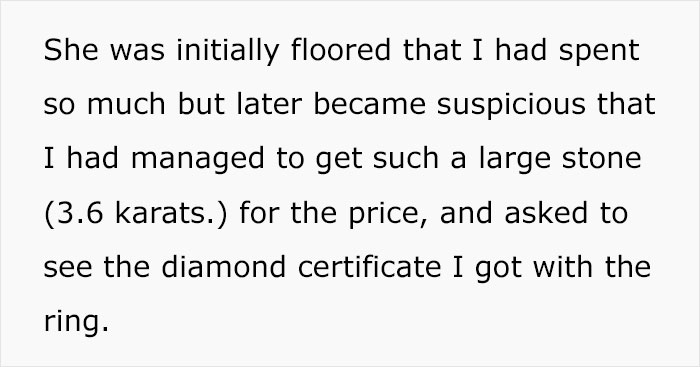 This is not true as lab-grown diamonds have the same chemical makeup as natural diamonds and they look exactly the same. Thanks to advanced technology, scientists can duplicate the conditions under which natural diamonds develop and there is more control over which color it will come out.

The OP explained this and also added that they are better for the environment and he can be completely sure that it isn’t a conflict stone. Also, it is cheaper but looks the same and has the same chemical structure. 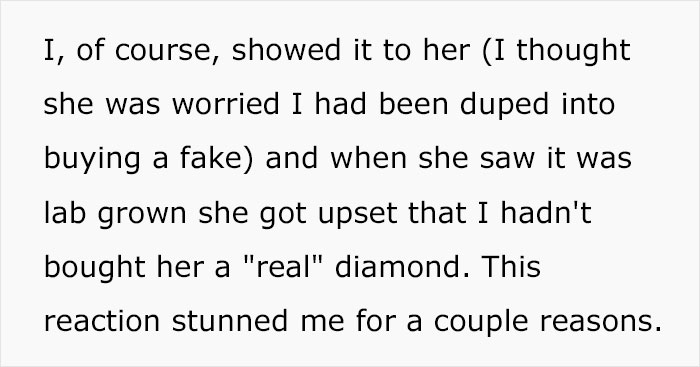 It was lab-grown so that explained the price, however, the fact that the diamond wasn’t natural upset the fiancée 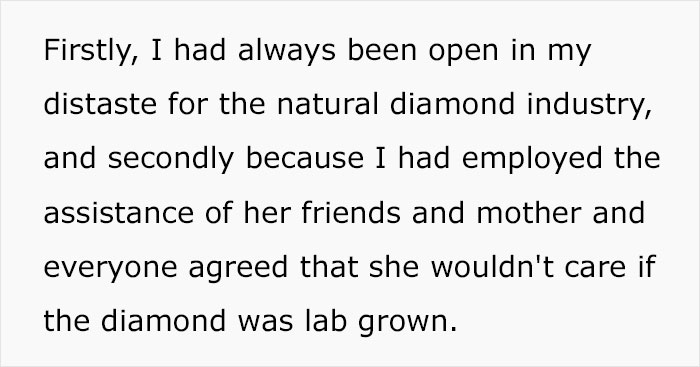 This wasn’t convincing for the fiancée and the man was stunned after receiving such a reaction, because he had asked her family and friends if his fiancée would accept a lab-grown diamond, to which they replied she wouldn’t care.

He is worried that there are no guarantees a natural diamond doesn’t come from a conflict area and he would really prefer to keep the lab-grown one, but his fiancée asked if he would exchange it for a natural one of the same value. 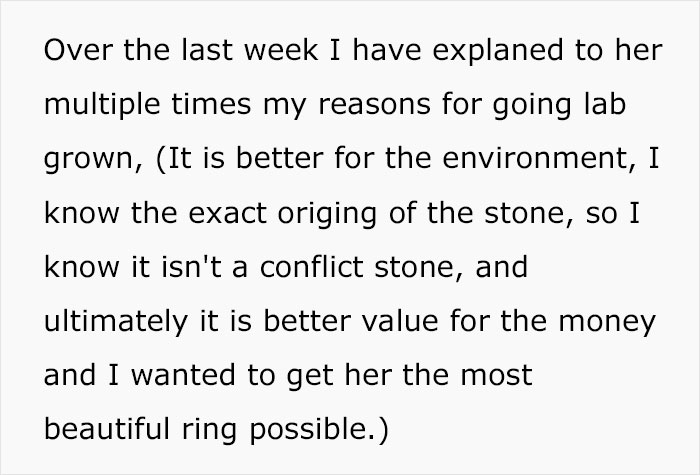 The man explained to her that lab-grown diamonds are as real as natural ones, but she asked if he could exchange it anyway 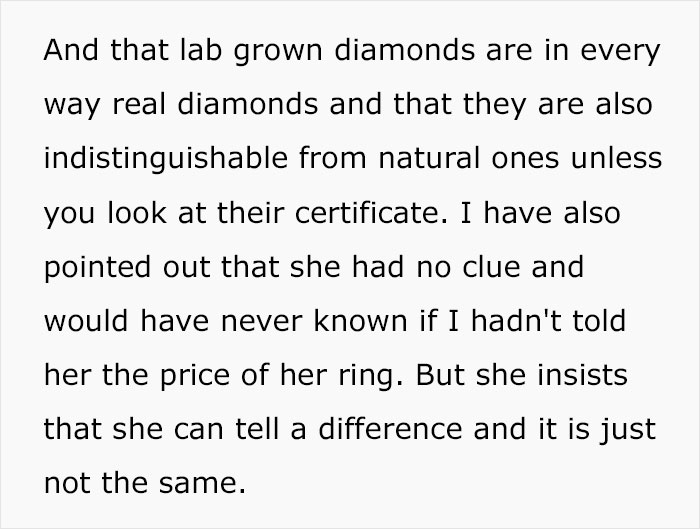 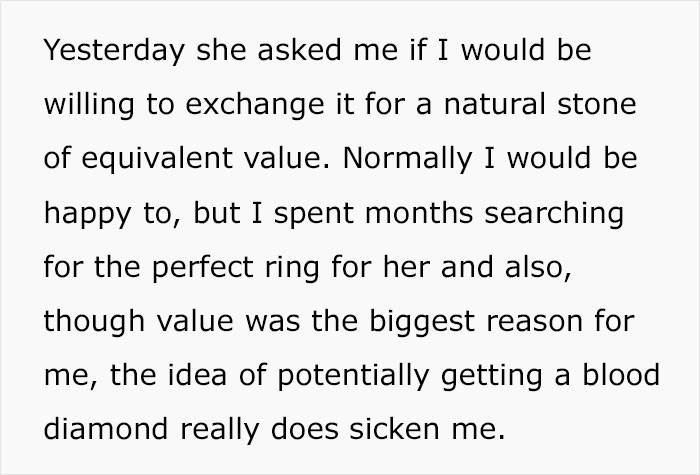 The OP is confused why she would ask such a thing because she didn’t even notice a difference until she saw the certification and now she is claiming that she does. So he refused, as he thinks that it is the perfect ring he was searching for for so long, has a good value, and it definitely is not a blood diamond.

He even went as far as saying that he is not against ending the relationship, that wouldn’t make him exchange the ring. Although later in the comments he admitted that he would do it if it meant so much to his fiancé. 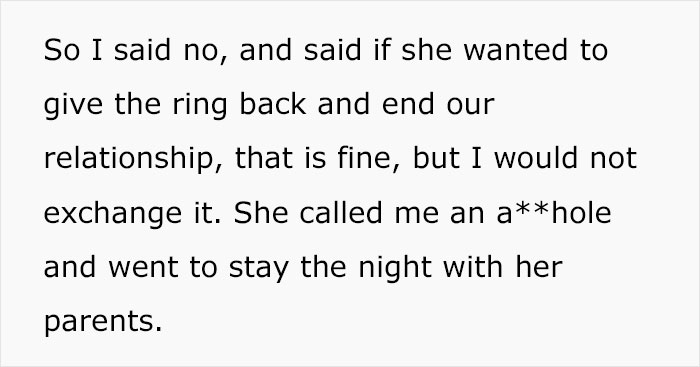 The OP says that if his fiancée will not change her mind, he will eventually do as she pleases, but in his heart, he feels that’s wrong 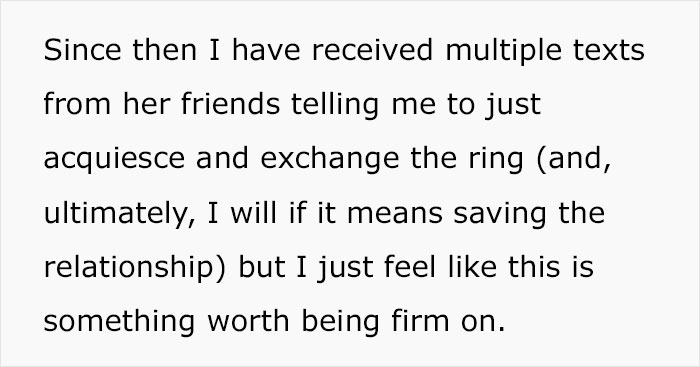 The Redditor asks if he’s being unreasonable and should just give in and exchange the stone. Because it wasn’t only the fiancée who thought that changing the diamond wasn’t such a big deal, but also her friends. The OP likes the idea of exchanging the diamond to a completely different stone but is unsure about how the fiancée would react, however, changing it to a natural diamond doesn’t seem right to him.

What would you do in OP’s situation? Do you think that his principles don’t matter here or do you think that the fiancée should be more grateful? Let us know in the comments. 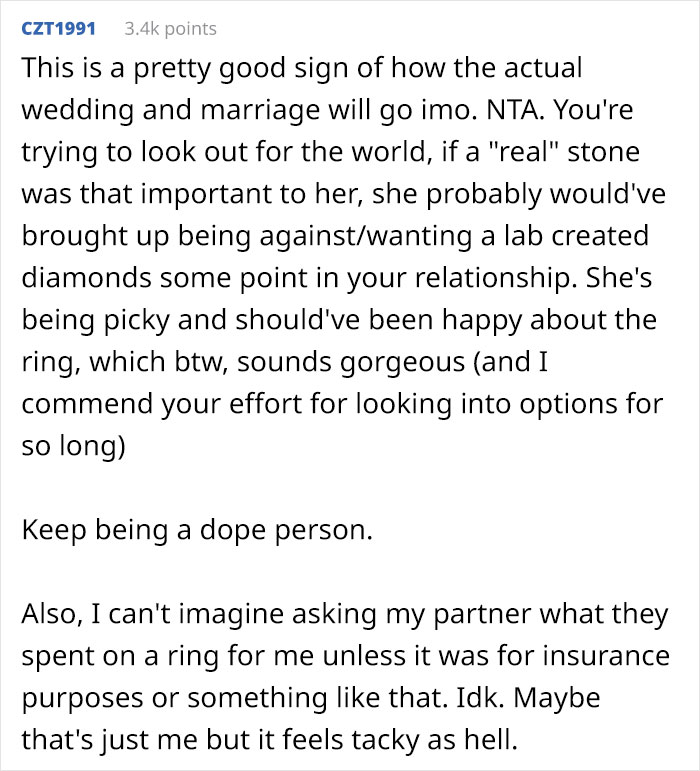 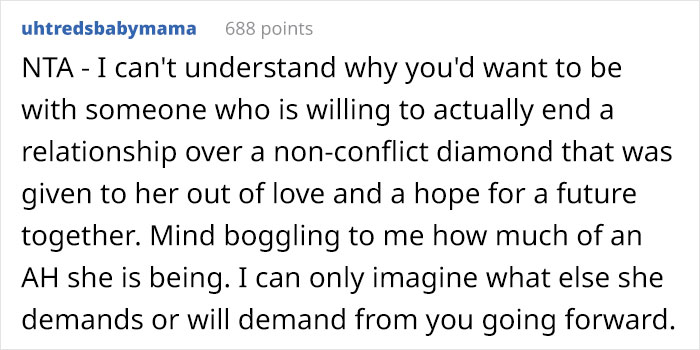 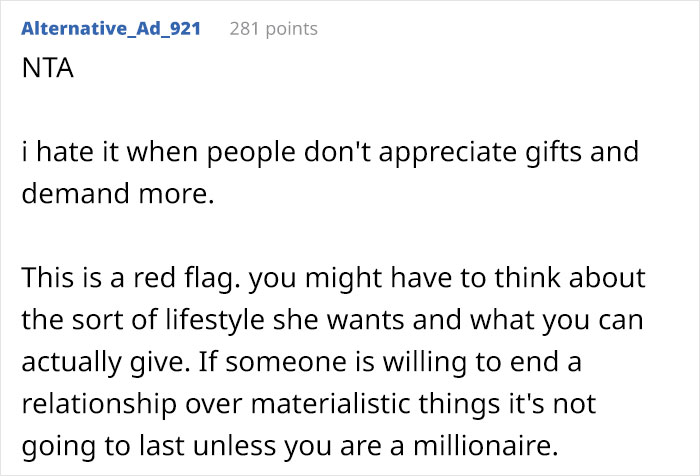 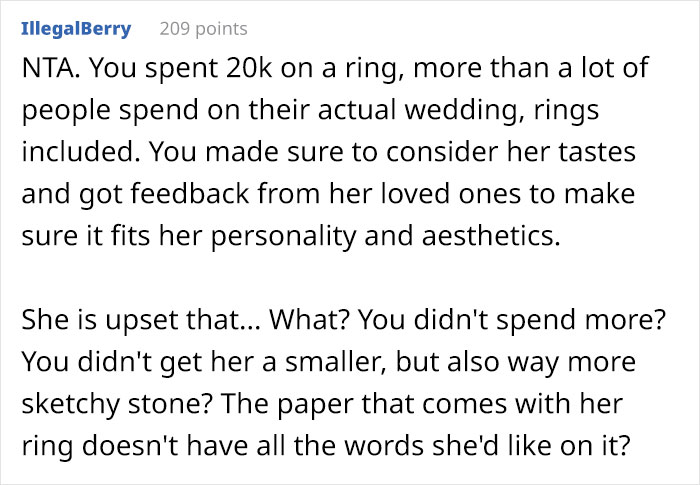 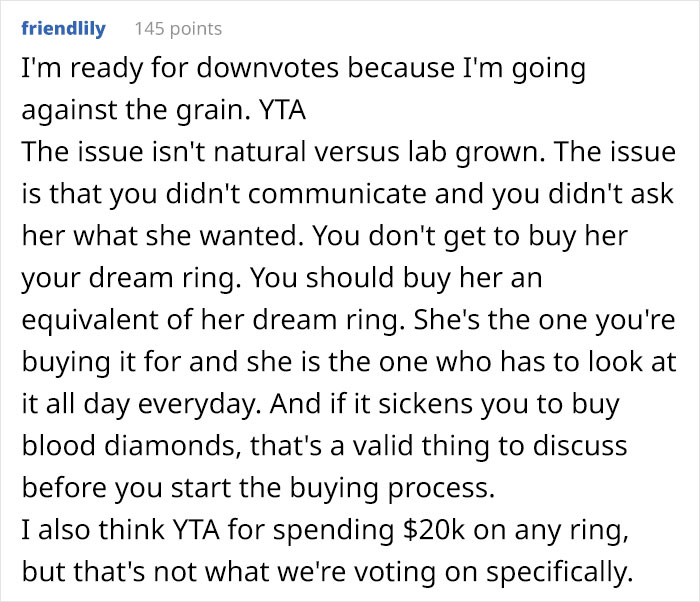 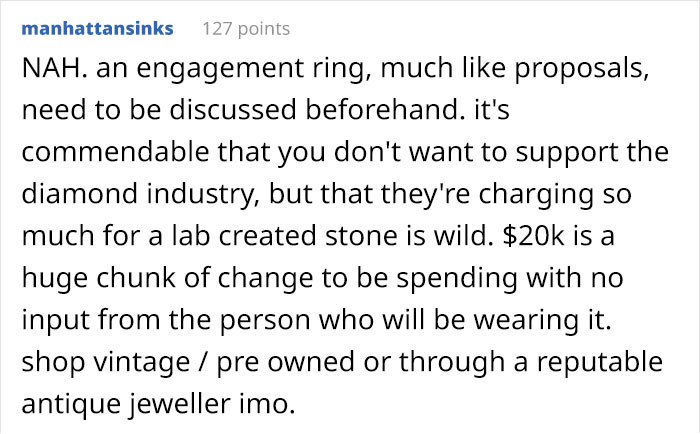 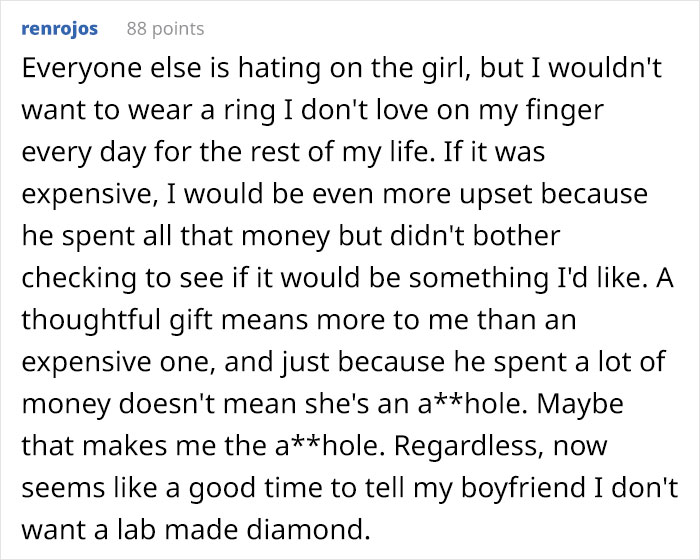 The post Drama Ensues After Man Refuses To Exchange A K Lab-Grown Diamond For A Natural Stone When His Fiancée Asked For It first appeared on Bored Panda.