Every transportation designer wants to design a new vehicle. But you know what none of them ever design? A new parking space.

One exception is industrial designer Takamitsu Ikoma. He started off in the toy business, designing Transformers robots for Takara Tomy; Ikoma had the advantage of being able to actually build and prototype whatever he could draw, a skill picked up while studying at Tokyo’s Kuwasawa Design School. (According to an interview with Japanese manufacturing magazine Fabcross, Ikoma was one of the only designers allowed to use Takara Tomy’s then-rare stereolithography 3D printer, because he actually understood how to print parts that would work.) 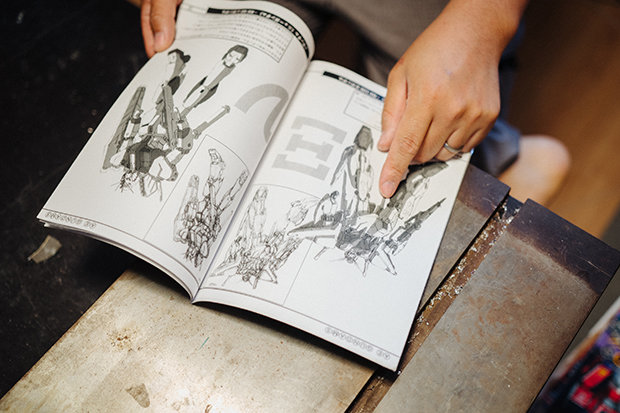 When Ikoma later transitioned into consumer products, his expertise in transforming shapes was called upon to design objects like this Tipron, a home robot that can wheel around your house, and whose head is a projector. Working with engineers, Ikoma learned about how to work with motorized metal parts rather than human-manipulated plastic parts. This skill would come in handy later. 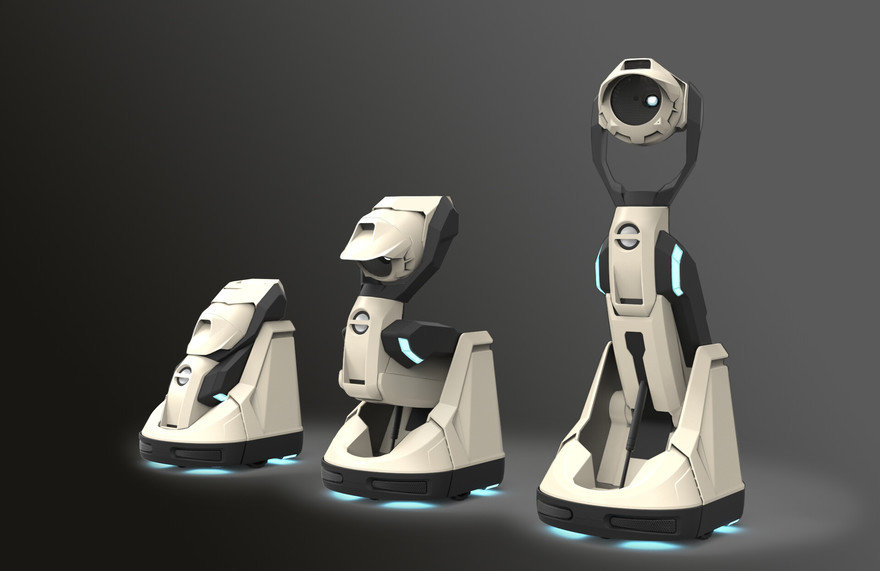 Eventually, like millions of other Tokyo residents, Ikoma recognized that parking is a major problem. Small shops and restaurants might like to offer delivery, but have no place to park the scooter. A resident might prefer to commute by scooter, but has no place in his building to park it. What if he could use his designing and building skills in transforming shapes to create a vehicle that didn’t need a parking space?

Ikoma had seen folding motorcycles before, but didn’t like their designs: They didn’t stand upright when folded, they didn’t actually shrink all that much, and “the transformation mechanisms were against my aesthetics (laughs),” he told Fabcross. Ikoma sketched out his own concept for a folding electric scooter on a whiteboard: 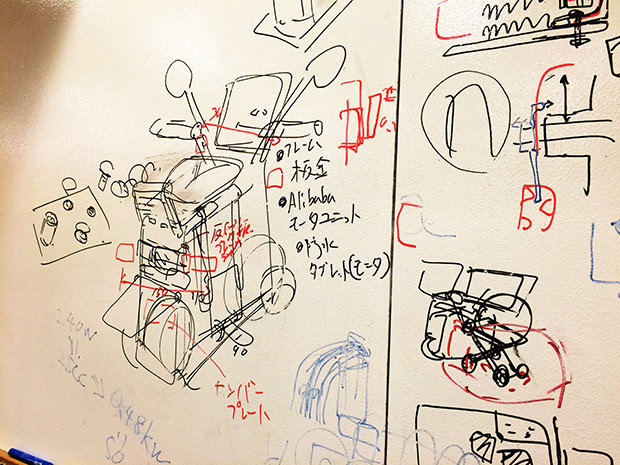 With a day job working for a startup, Ikoma didn’t have time to pursue the design. But when his son was born and he was granted paternity leave, he used some of the time at home to learn Fusion 360. Using the program, he worked out the details of the scooter, then showed the CAD drawings to his wife. She urged him to post it to Twitter, to gauge public reaction. He did: 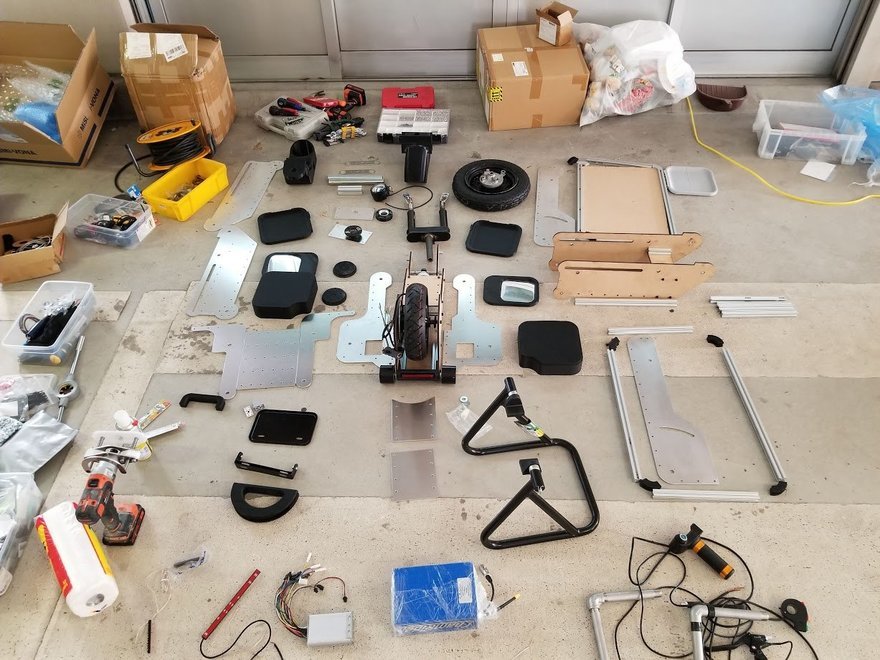 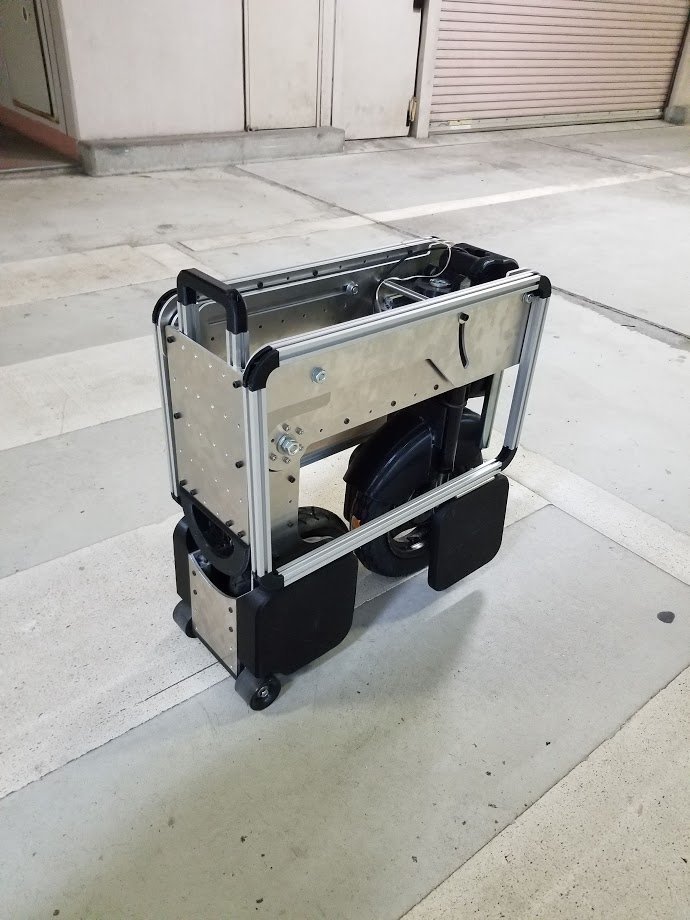 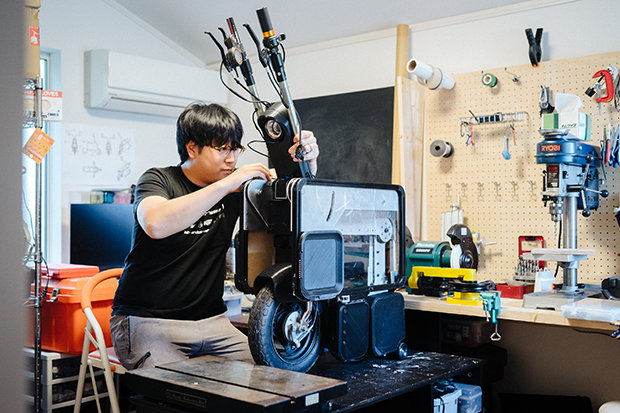 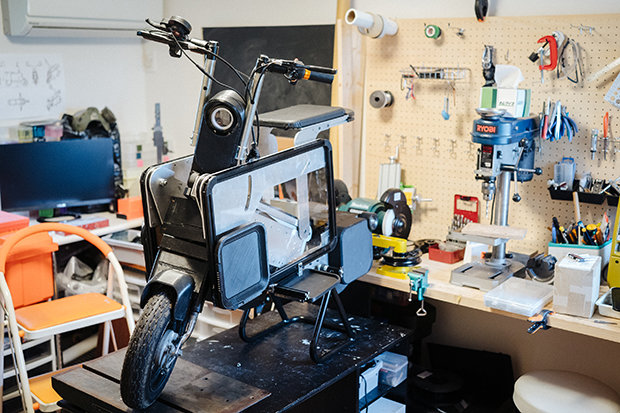 Once he had a workable prototype, Ikoma began bringing it around to maker events and exhibitions. In-person enthusiasm was effusive. In March of this year, about 16 months after that fateful Tweet, Ikoma decided to take the plunge. He quit his day job and formed Icoma Inc. with the intention of developing the scooter’s design and going into production. 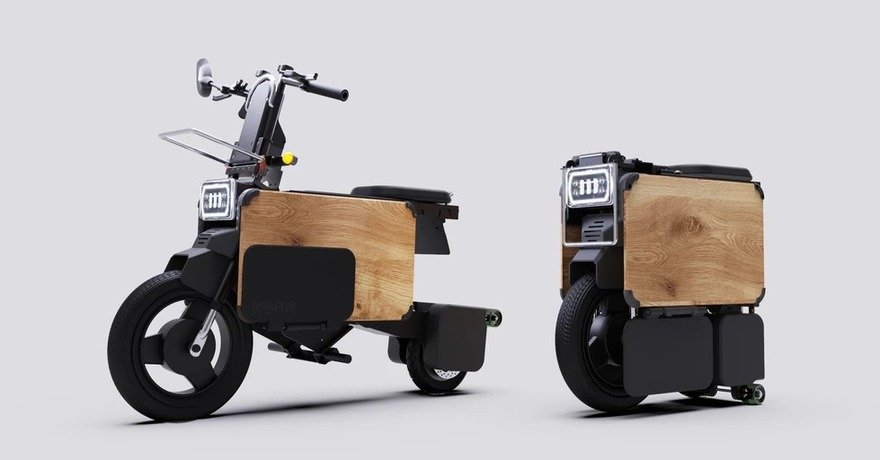 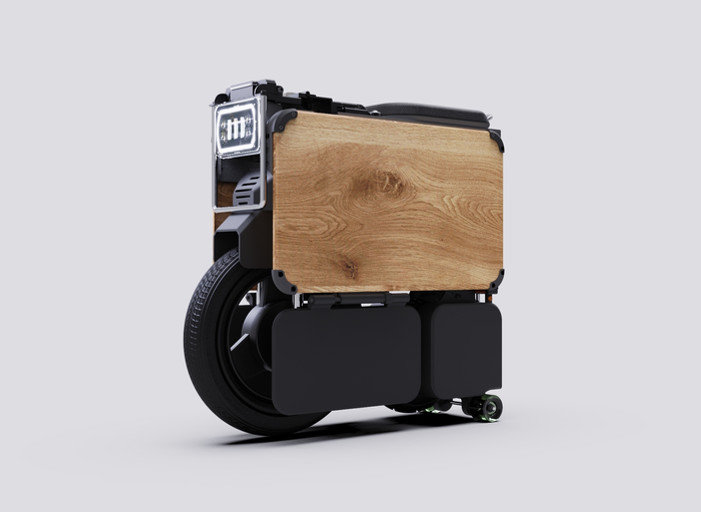 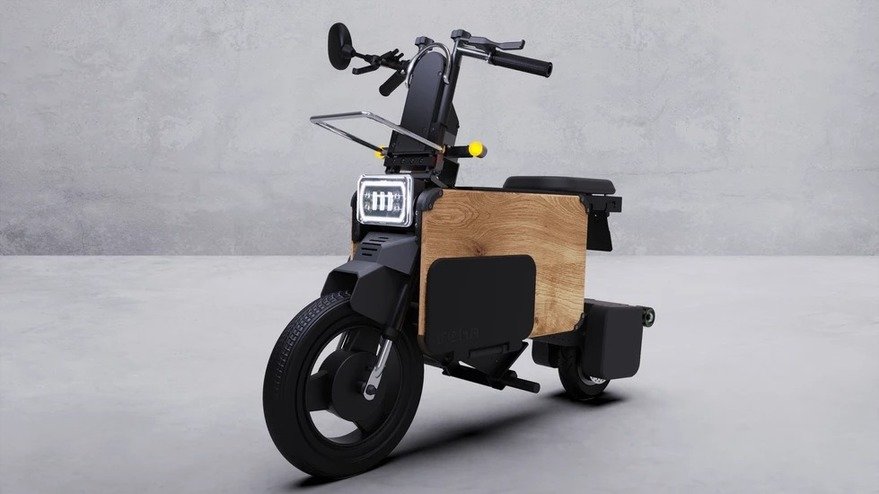 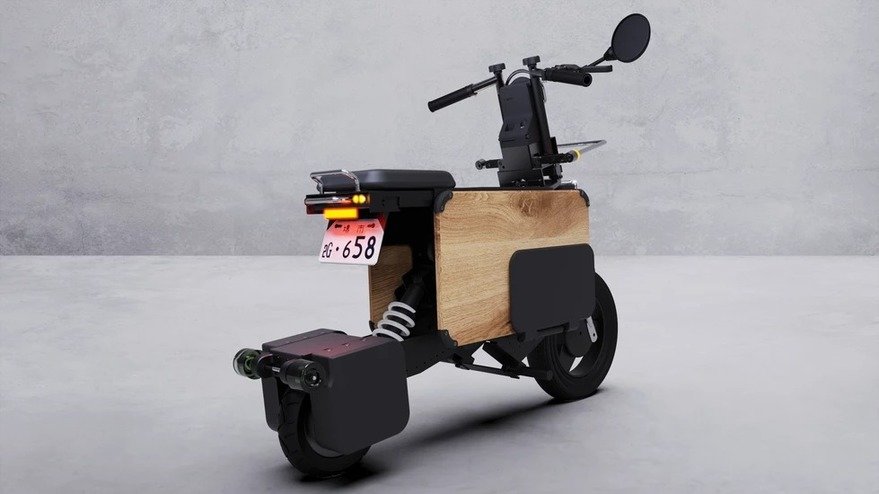 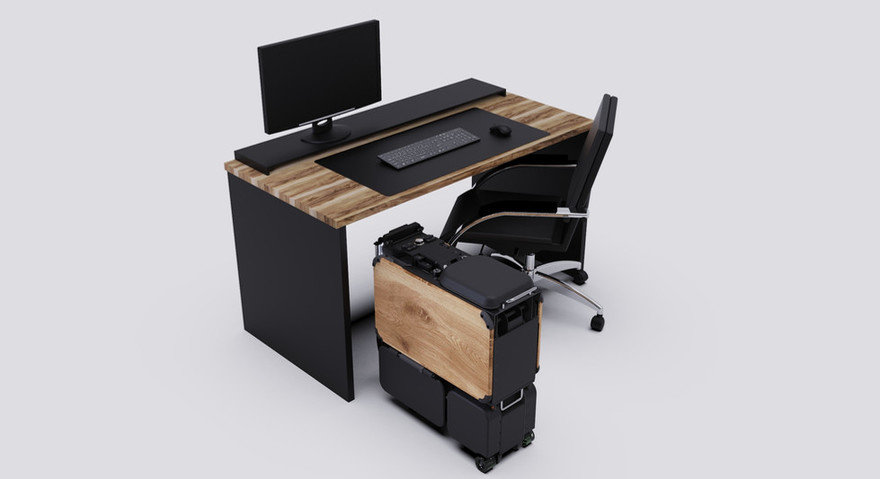 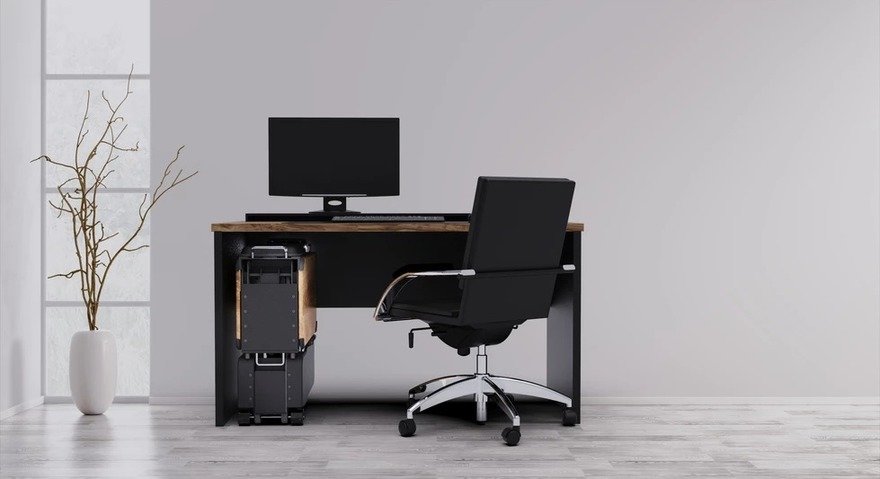 The wood panels on the model above are meant to complement the decor of the apartment in the photo. Ikoma’s idea is that these panels, and certain components of the scooter, can be whatever the end user wants: 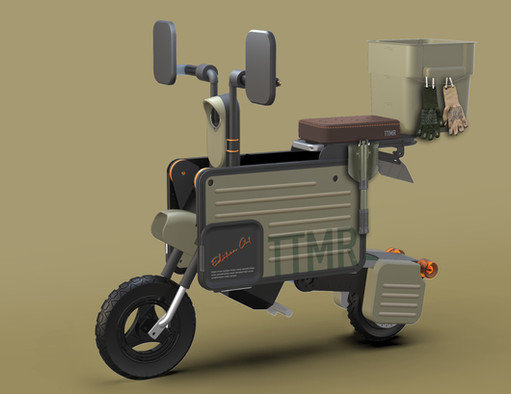 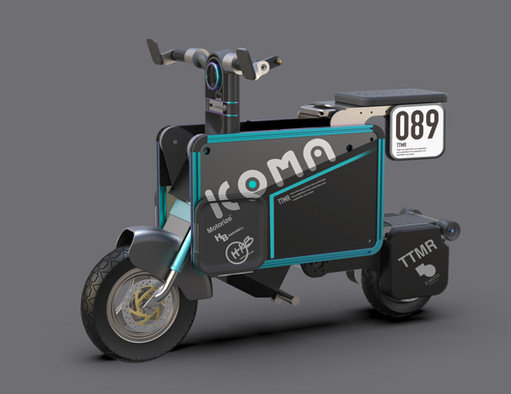 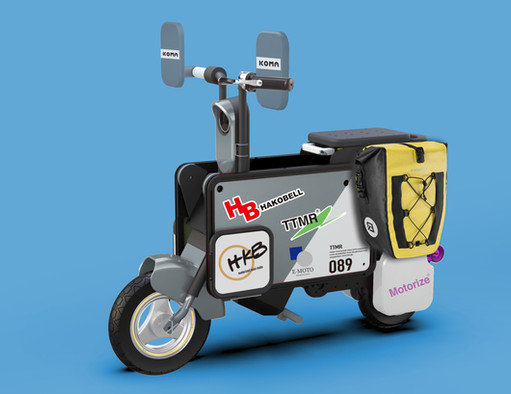 Here’s how the scooter transforms:

Just this week, Ikoma released a video of the nearly-ready-for-primetime Tatamel Bike, as he’s calling it:

“Currently,” says the Icoma Inc. website, “we are developing for mass production.” I hope they make it!