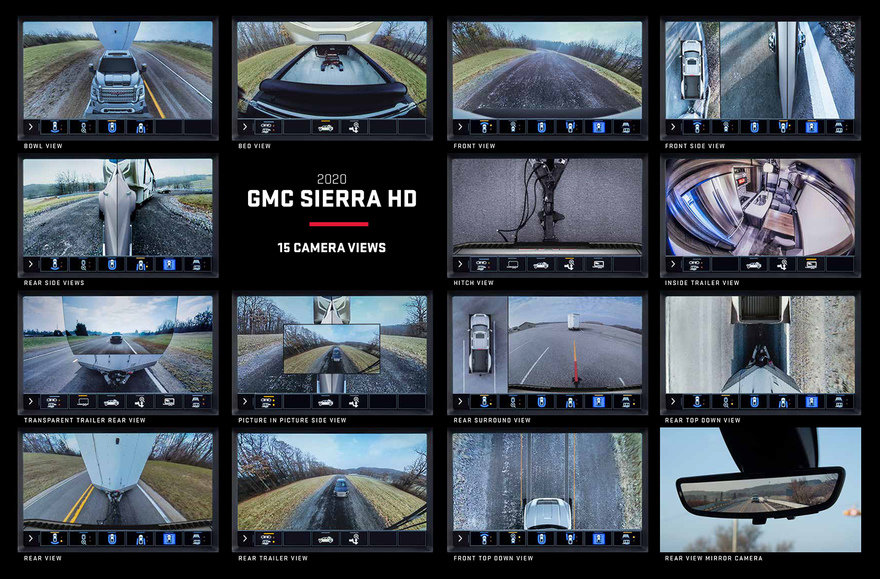 We recently covered an event in Jackson Hole, Wyoming, to evaluate the trailering capabilities of GMC’s new light- and heavy-duty Sierra pickups.

The event started with an accident.

GMC’s designers and engineers have developed a clever, comprehensive camera system to help avoid accidents–but they can only help if you’re using them. Prior to the group briefing on how to use these features, one of the automotive journalists wanted to try towing a massive camper trailer that was already hooked up to one of the trucks. He misjudged his spacing and made contact with a building, damaging an awning.

This didn’t bode well for me. As we lined up to be assigned a truck, a GMC coordinator asked me “How much trailering experience do you have?”

“Zero,” I said. Meanwhile, the journalist who had had the accident was a truck owner who did have trailering experience. What hope would I have of safely trailering the multi-ton loads on hand, up and down the narrow mountain roads around Jackson Hole? I was pretty damn nervous.

They paired me with David Ames, the Assistant Chief Engineer for the ten-speed Allison transmission in the Heavy Duty Sierra AT4 we hopped into. (Allison makes well-regarded medium- and heavy-duty transmissions that you’ll find in buses, fire engines, construction vehicles, military vehicles, et cetera.) While I’d be the one driving, David would walk me through using the camera system.

For this first drive, I was trailering this thing: 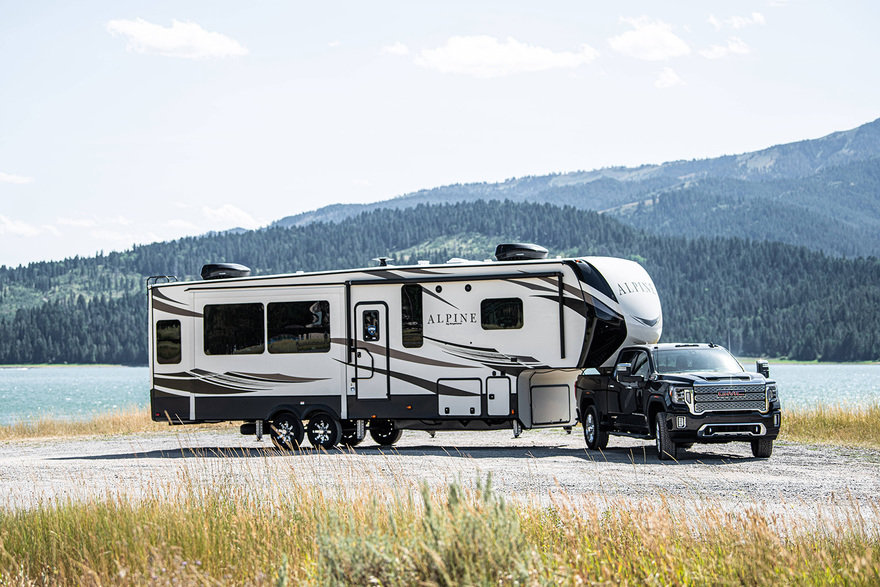 That’s a 14,000-pound camper, and the first thing I had to do was get out of the campgrounds we were in, down a narrow, unpaved road lined by landscaping features and rental cabins. As luck would have it, another pickup truck was coming down the road towards us. This was going to be a very tight fit.

Ames hit a button on the screen in the center of the dash, pulling up the cameras. (Because I could not take photos and drive at the same time, I’ll use stock photos here to illustrate how I was able to use the system.) 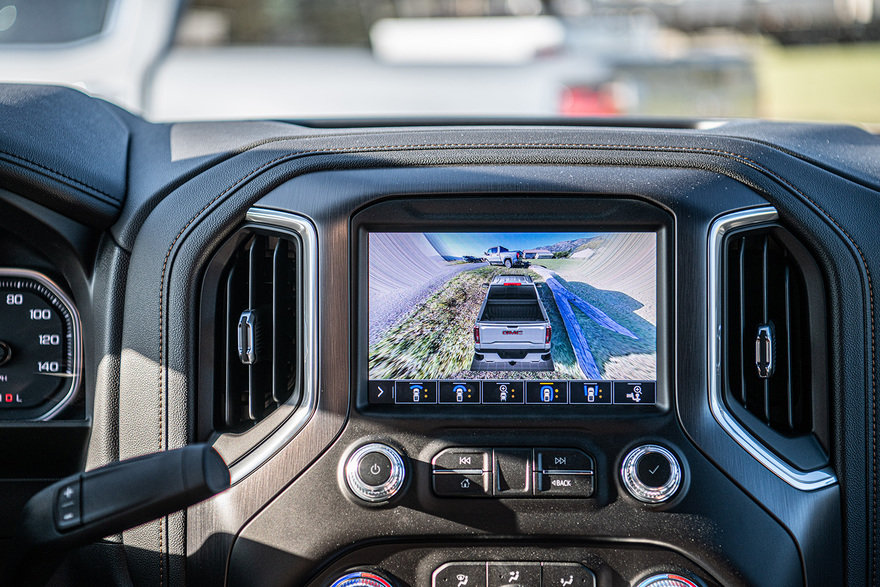 First off, when sitting in the driver’s seat of a vehicle with such a large hood, it can be difficult to judge exactly where the nose and sides are. The “overhead” view–which software cleverly stitches together from footage shot by multiple cameras located in the nose and side mirrors–made it easy to guide the truck within tight confines. As the approaching vehicle nosed towards me, I could see it in the overhead view, too, and thread the needle with confidence. 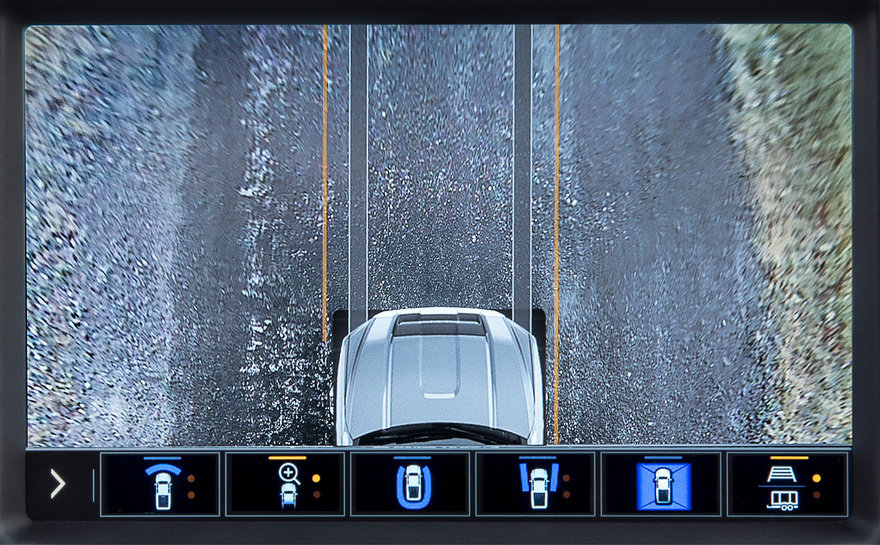 For terrain features that don’t show up well in overhead view–for instance, a shallow ditch that would be a big problem to drive into with a trailer attached–Ames showed me this split-screen side view, which provides a more detailed angle. 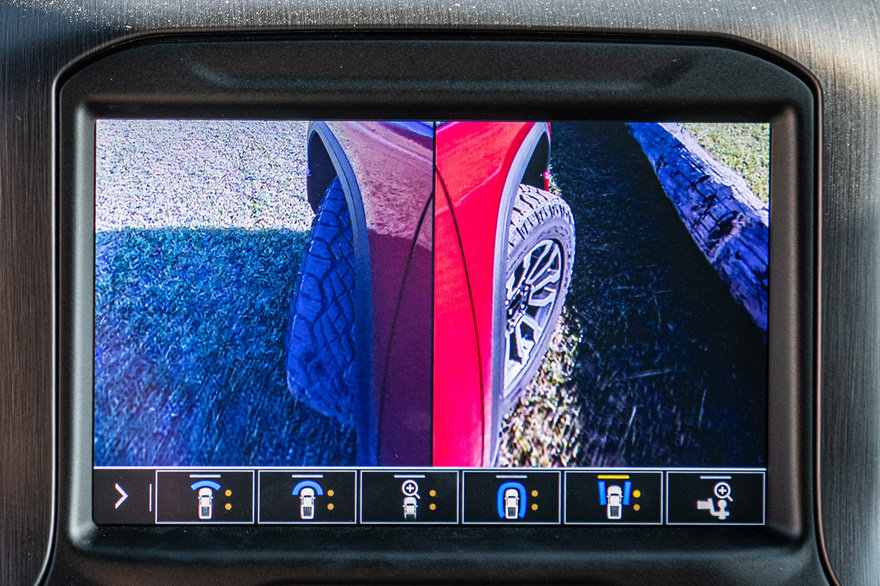 As the oncoming truck and I began to pass each other, I realized the trailer we were towing was a bit wider than the truck, presenting a potential problem. Ames showed me the following camera view, which allowed me to see backwards down both sides, so I could course-correct: 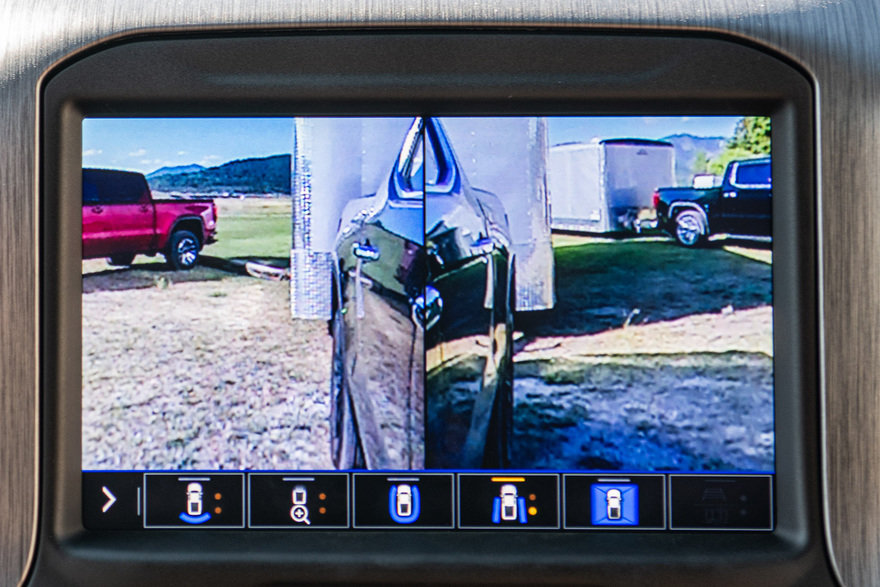 You can even choose to see two views at once: 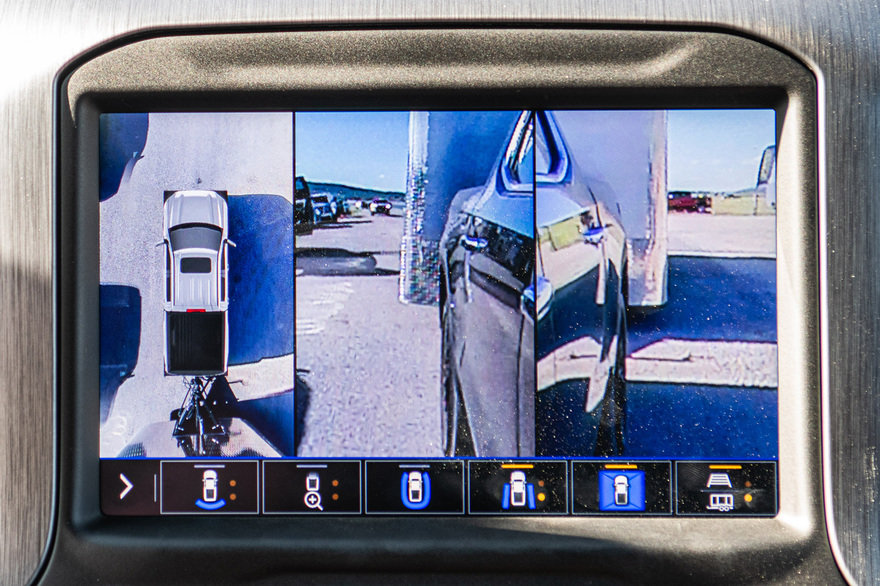 Finally we reached the T-intersection to pull onto the main road. Ames explained that with a trailer this long, I wanted to pull straight forward until the truck touched the double-yellow line (which was perpendicular to us), then turn the wheel sharply to enact a 90-degree turn. This would give the trailer enough clearance to make the corner. For safety, I could check using this camera view: 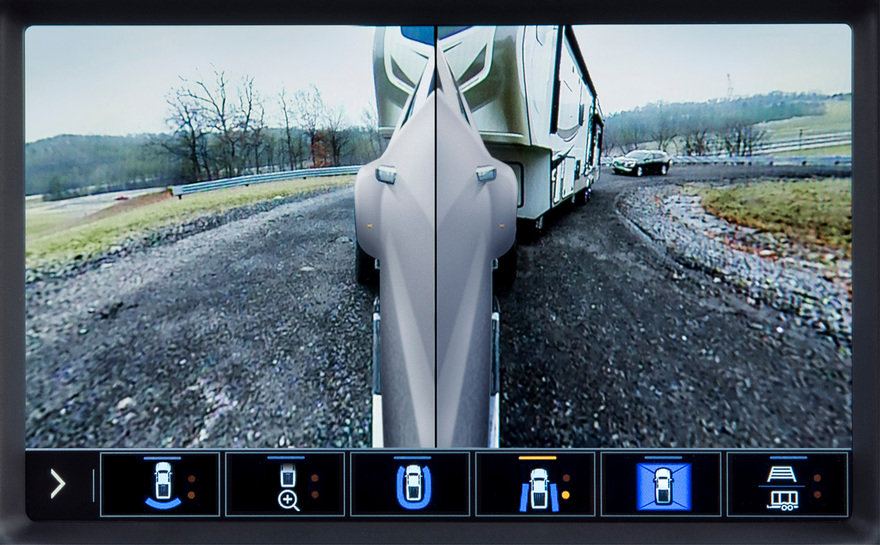 There really is no substitute for being able to see things clearly from all angles, and I was grateful for the technology.

Once on the road, the truck’s DuraMax diesel engine had no problem getting up to speed. In fact after we’d cruised for ten or fifteen minutes, uphill most of the way, you could even forget there was a trailer back there–which Ames warned me was, of course, dangerous. The irony of producing a truck powerful enough to pull something that heavy, without struggling, is that it can lead to complacency, so the driver must remain vigilant.

From a sensorial perspective, there were only two things that made me aware we were hauling this 14,000-pound thing. The first is that, since we were using what’s called a gooseneck or “fifth-wheel” trailer, it’s attached to a connection point anchored in the center of the pickup bed itself, not the ball hitch. So when you go over bumps at speed, the truck’s suspension absorbs it for the truck, but the trailer bounces up and down a bit. That transmits a temporary, residual juddering into the bed of the truck, which reminds you that you’re attached to something. 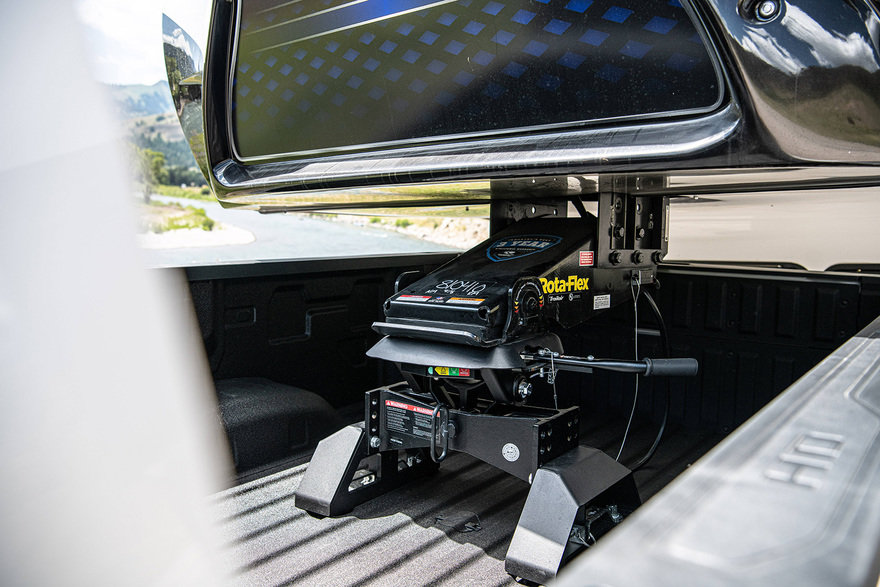 The second thing is that whenever you come to a complete stop, or take off from a stop, you feel a definitive “CLUNK” as there’s a little bit of play in the hitch connection. I found it initially jarring, but Ames assured me it’s normal, and after a while I simply welcomed it as a haptic reminder of our load’s presence.

The 10-speed transmission was remarkable, and I’m not just writing that because the guy who helped develop it was in the truck with me. The shifting is smooth and practically imperceptible. It never struggled or shifted abruptly, but always seemed able to find the correct gear, even uphill or when I gave the accelerator a little extra, and it never wanted for power. 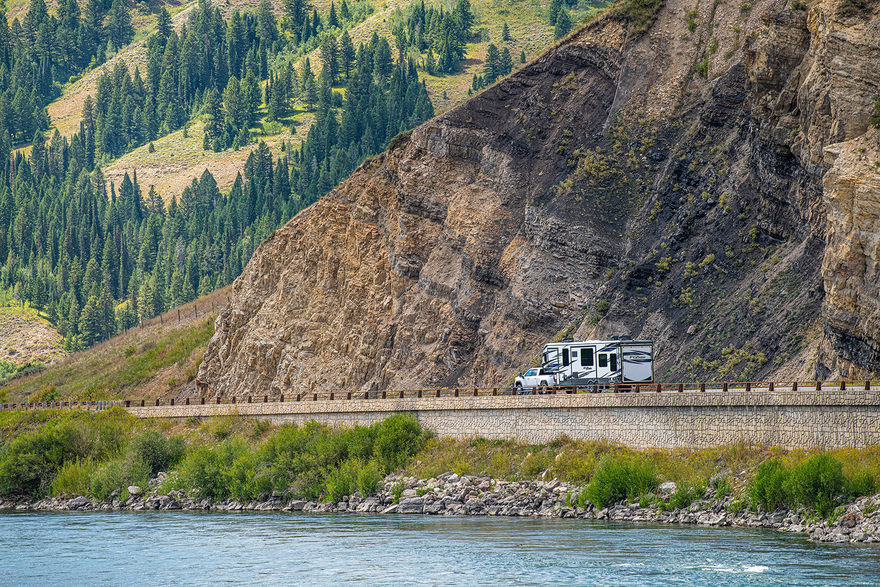 Then we got to the downhill part. Ames pressed a button on the dash marked “Exhaust Brake.” As we cruised downhill, he asked me “Do you feel that?”

Planted firmly in the driver’s seat, I tried to detect whatever sensorial anomaly he was referring to. But I didn’t feel anything different in the road feel, steering, braking, et cetera. “No,” I said.

“Exactly,” he said. “In a truck without Exhaust Brake, going downhill like this, you’d really feel like this 14,000-pound trailer is pushing the truck downhill, and you’d be riding the brakes pretty heavily.”

I could imagine that, but had no such sensation; the braking didn’t appear particularly challenging. “What does Exhaust Brake do?” I asked. Ames explained how the feature forces exhaust gases back into the engine, and followed with a detailed engineering explanation, but: Long story short, it uses the power of the engine, rather than the brakes, to slow the vehicle down. The result for the end user is that it doesn’t put a greater load on the driver or the brakes when going downhill.

Next we come to my almost-accident, which was entirely my fault. 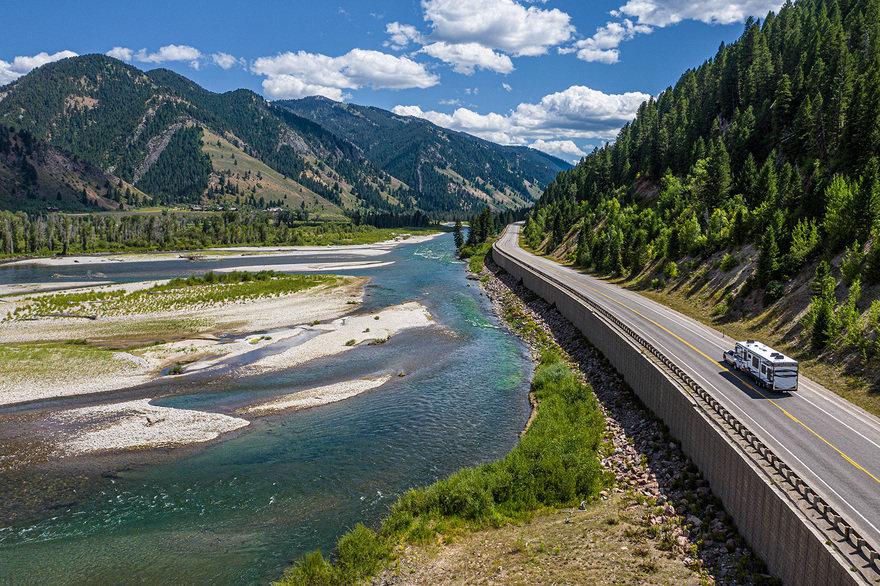 The mountain roads we were driving up and down were two-lane, meaning one lane running in each direction. A fair amount of the traffic is large tractor-trailers or trucks towing stuff. Because of the weight and the road curves, these heavy vehicles are often driving at or below the speed limit. To allow zippier cars to pass them, the road periodically sprouts a short-run second lane on the right. Heavy vehicles are supposed to pull into this right lane, so that cars can pass on the left.

Ames had pointed this convention out to me, but at one point I became so engrossed in our conversation that I failed to notice one of these extra lanes had appeared. By the time I realized it, and turned my blinker on to get over to the right, an apparently impatient driver–whom I had not seen behind me–had unwisely decided to try passing on the right. Completely in my blind spot.

So here’s what happened: I turned the right blinker on; the camera view–which is linked to the turn signals–automatically switched to the right rear camera view, presenting a clear view of the blind spot. Where I was alarmed to see that a Subaru wagon was about to accelerate around the right rear of the trailer just as I was drifting into that lane. 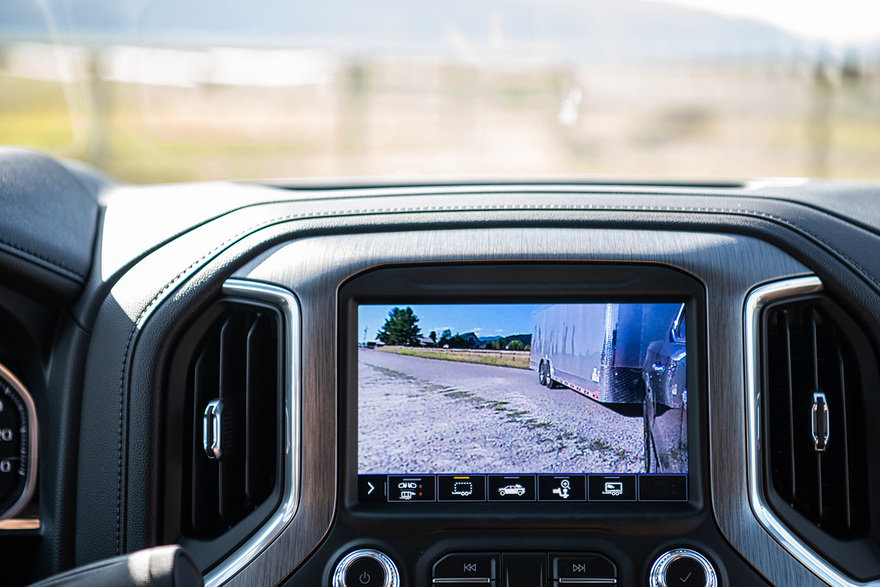 The Subaru driver backed off and leaned on the horn angrily. As I completed the transition into the right lane, the Subaru whipped around on the left, accelerating quickly to draw even with my window. The woman driving the Subaru rolled the windows down and spent, I’d say, ten seconds yelling some unprintable things at me. I tried to apologize but she wasn’t having it. She zoomed off.

The woman was furious, and I get it. She was angry because she’d been frightened, my fault for not remaining vigilant that I’m towing around a potentially deadly amount of weight that could knock a car right off of the road. I told Ames I’d pay better attention and that I hadn’t even realized the car was behind me. While there was a camera mounted to the back of the trailer, which gives you the option to drive with this view on screen… 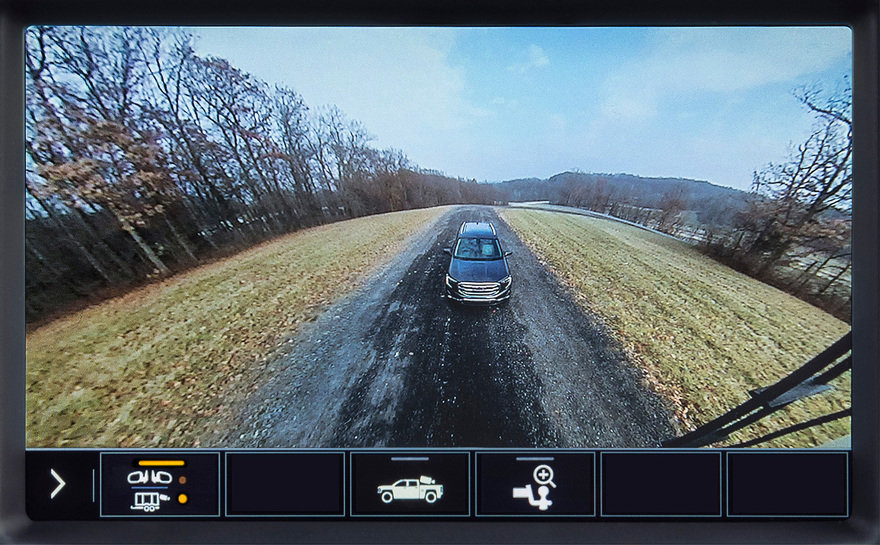 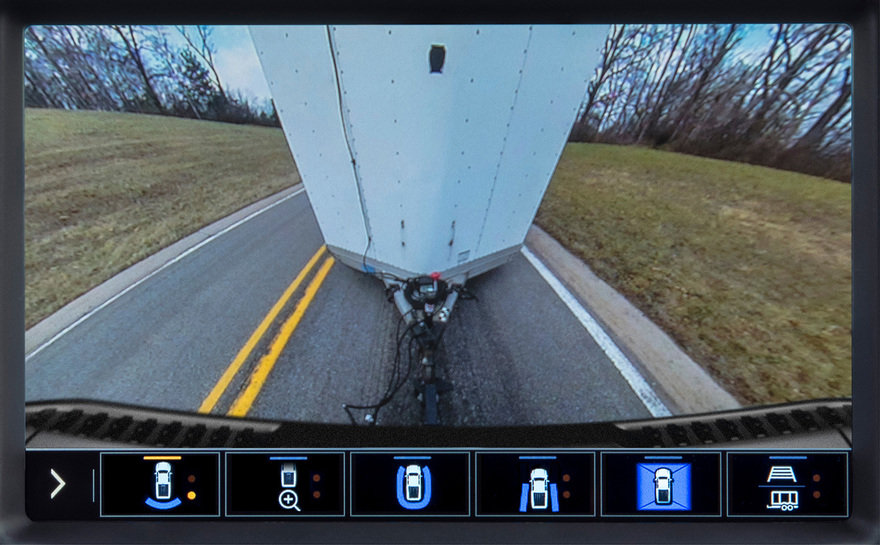 …so that I could ensure the trailer wasn’t wiggling outside the road lines.

Ames pressed another magic button, showing me this view: 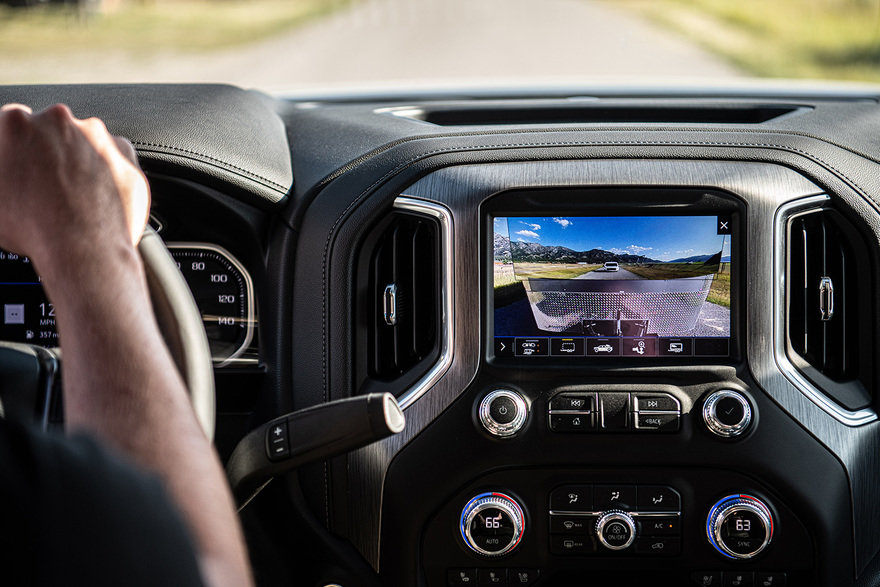 That’s called “Invisible Trailer,” and as you can see, it renders the trailer functionally transparent. Pretty darn brilliant. 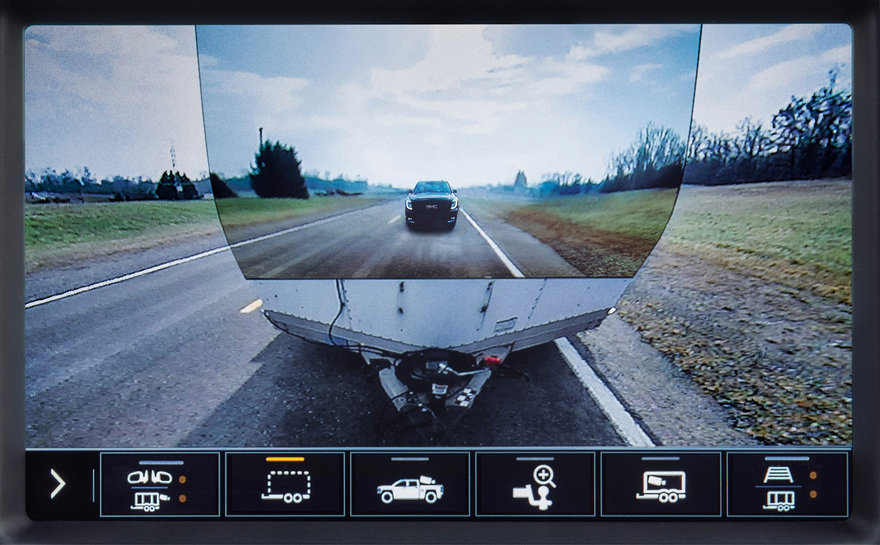 I made it back to base camp without further incident. Overall I was impressed at how manageable this combination of design and engineering elements–the truck’s power and transmission, the camera array, and the all-important UX that tied it all together–had made this daunting task so manageable for a first-timer like me. Having no prior experience with trailering, I cannot imagine how people do it without the situational awareness conferred by GMC’s system.