Coming up with a fair division of household duties is a delicate subject for many couples. While all you need to do is split all the tasks in two, the reality is a bit more complicated. Perhaps you wind up taking the bulk of the domestic load, or your partner simply doesn’t pull their weight. Then annoyances over dirty laundry and unwashed dishes inevitably build up and spiral into heated arguments that leave you resentful. And sometimes, it even leads to a downright chore war that leaves partners no choice but to lunge into battle.

One such case is what happened to Redditor Limp-Cryptographer26, who recently shared her story with the AITA community. As the 36-year-old woman detailed in her post, she left the house sparkling clean before going on a trip with her kid, just to make things easier for her husband who picked up a lot of overtime while they were away.

But after a smooth-sailing week at camp, she was shocked to return to a wrecked house. The wife got so fed up being the one cleaning up after her hubby that she gave an ultimatum that seemed to have strained their marriage. Scroll down for the full story, as well as some reactions from readers, and then let us know in the comments what you think about the situation.

After this woman went on a camping trip with her child for a week, she cleaned the entire house to make things easier for her husband 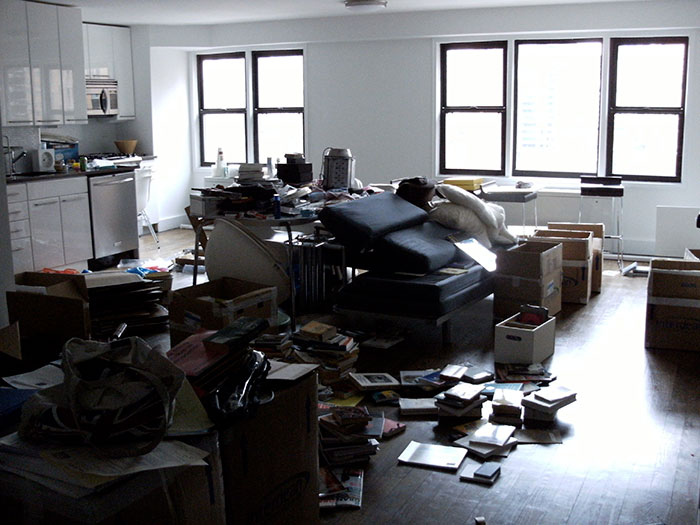 But when she returned home, she was appalled by the level of mess he made while she was away 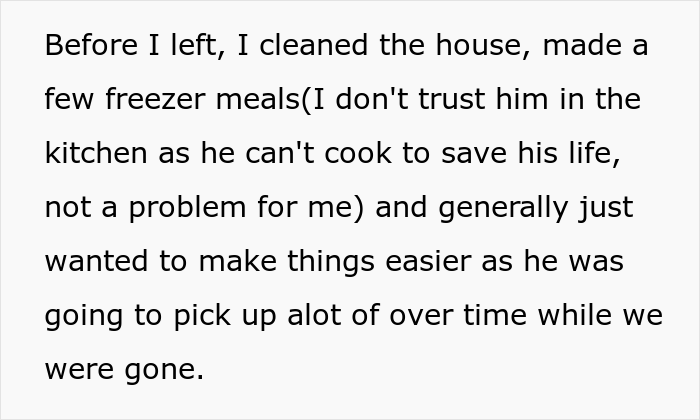 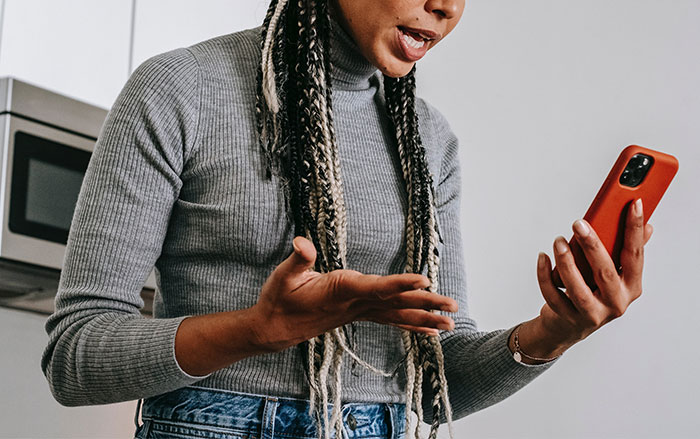 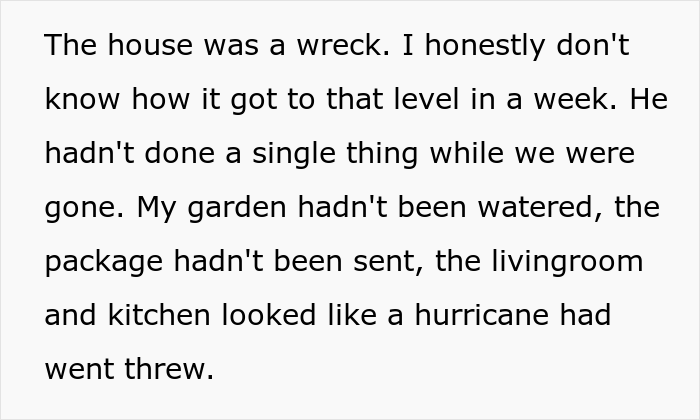 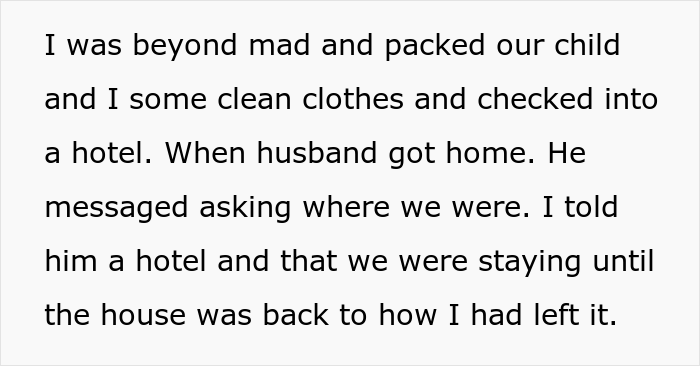 For busy couples who juggle work, chores, and kids, arguments can come from any direction. But while we imagine that the typical topics of relationship troubles such as infidelity or money problems are the primary bones of contention, this story proves it’s not always that dramatic. Partners sometimes get upset about the little things, like who does the dishes or takes out the garbage. While it may seem petty, these issues can add up and lead to built-up resentment that fractures the foundation of the marriage.

According to a survey from Yelp and OnePoll, 80% of chore-doing people living with a partner have disagreements about housework, with one-fifth of those saying they disagree often. The survey consulted 2,000 American adults who live with a partner and was split evenly between men and women. It found that the most common disputes revolved around when to do the housework (53%), how to do it (50%), and who should do it (48%). Moreover, 61% even admitted they’d cleaned the home again after their partner did.

To gain more insight on the issue from an expert, we reached out to Eileen Head, a transformational coach who aims to help people to shift their mindset and release old beliefs, blocks, and patterns to create the love they desire. According to her, the wife was absolutely right to leave the house after her husband neglected all household duties. “And as a matter of fact, taking this stand is crucial to this relationship, for both of them to create a loving and connected relationship,” Head told Bored Panda.

However, the coach also pointed out that when couples enter the territory of household chore battles, the issues have little to do with who should be vacuuming the kitchen or loading the dishwasher. “What couples fight about is not really what they are fighting about,” Head said. “There is usually an underlying issue of needs not being met. So, this is much deeper than the house being a wreck.”

While conflicts about household chores are common and often lead to even more squabbles, resentment, and feelings of disrespect, it is how these arguments are handled that matters most. “Without knowing more about this couple, has this been an ongoing issue? This is not about who is TA here but more about how they are responding to the needs of each other and resolving this current conflict in a loving way.”

“At a deeper level, how your partner handles your needs is translated into emotional needs of value, worthiness and feeling loved,” Head added.

Later on, the user jumped to the comments to clarify some details about the situation 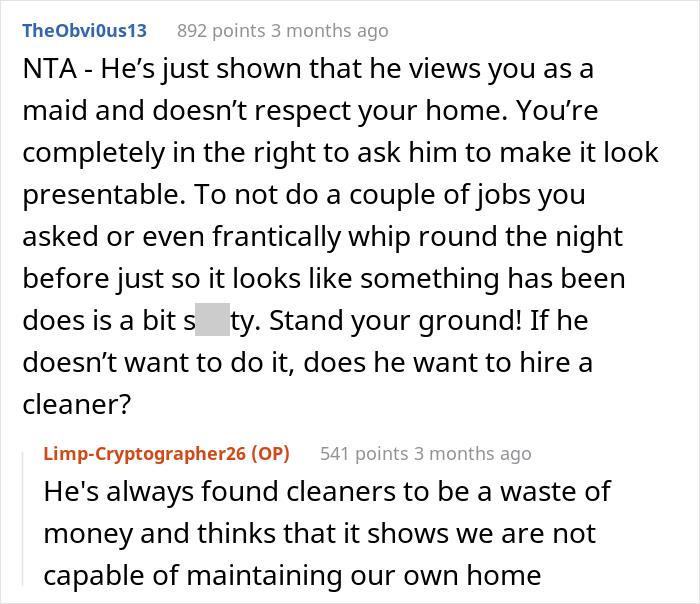 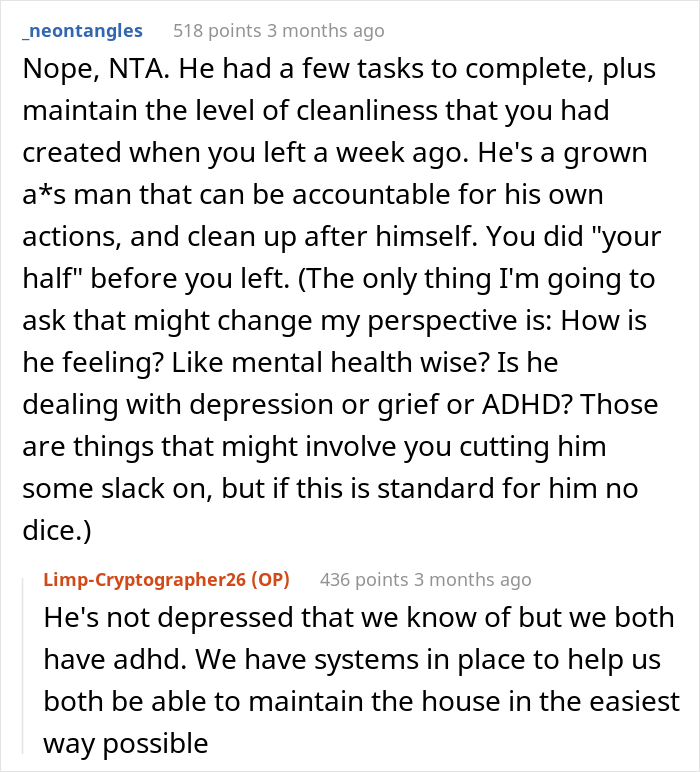 Coach Head mentioned that studying the Enneagram (any-a-gram) personalities will help you to understand “why cleanliness may be a high value for one person and feeling controlled by their partner with this need. This might be part of what is going on with the husband.”

“Patterns get set up in relationships and can be effective…and can also be dysfunctional. There can be patterns of parent/child relationships where one person is more responsible than the other.”

Speaking of the situation in question, the fact that the household chores are generally shared equally sounds positive. But Head argued that when her husband refused to acknowledge that the house was left clean and now is a mess, and then complained that it wasn’t that bad — it shows a lack of maturity. “Then saying that with their agreement, she should now help with her 50% to clean it up is not taking responsibility. Her 50% entailed leaving the house clean in the first place and even precooking meals for him!”

“Concerning for me is seeing that he didn’t even do the few tasks she had asked…watering the garden and sending out the package. This shows me a lack of disregard for his wife,” the coach said. “Has this been a pattern that has been overlooked in the past?”

Tackling chores in a relationship can be an ongoing struggle, but thankfully, there are ways to create a shift in the couple’s dynamics. “Someone needs to change the pattern, and she did that by going to a hotel. I hope that she stood her ground, but if she caved, that would put them back into the revolving pattern unless he apologized and claimed responsibility,” Head noted. “Husbands who love, value and respect their partner would not behave in this way.”

“Many couples struggle with these seemingly insignificant challenges in relationships which often accumulate. When coaching clients, I interpret for them, based on their Enneagrams, what’s important and why, and how each person feels emotionally loved and valued,” Head concluded.

And here’s how the readers reacted after reading the story 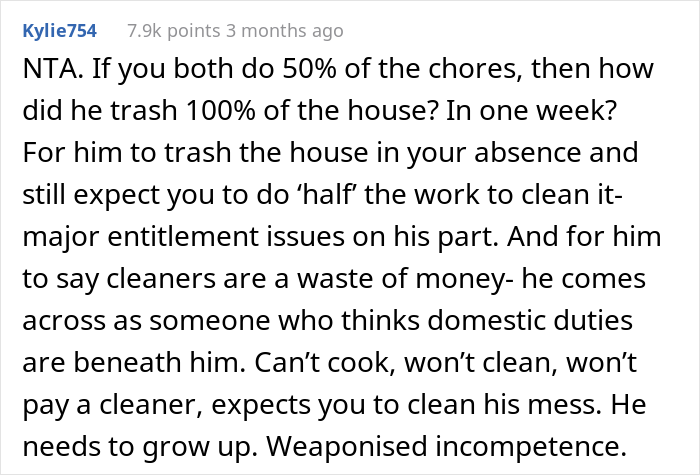 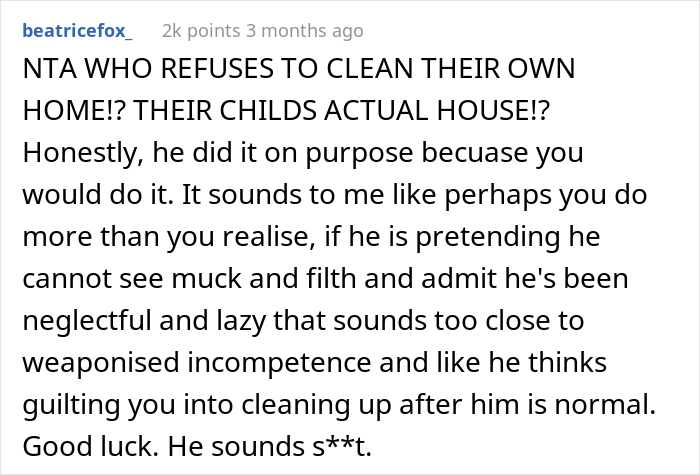 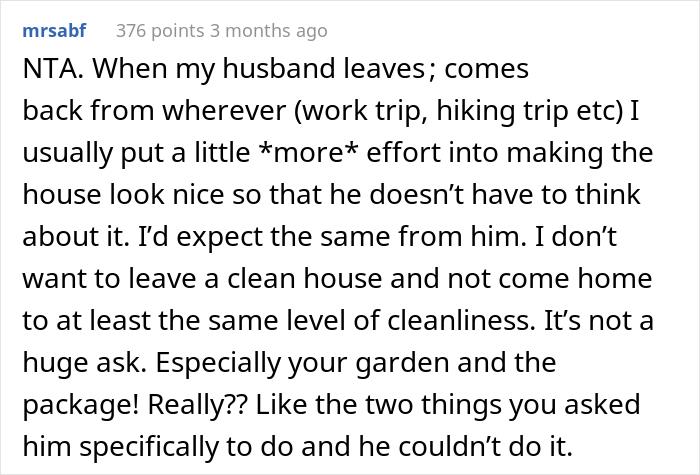 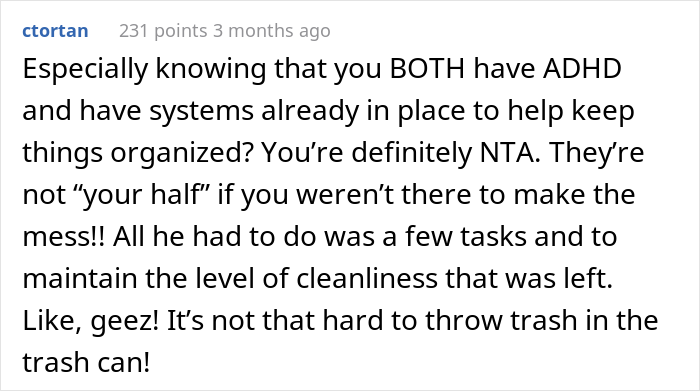 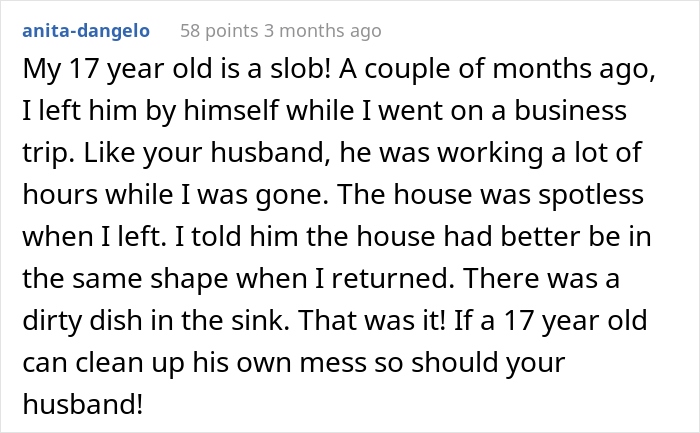 The post “I Couldn’t Believe My Eyes”: Woman Is Fuming After Husband Neglects All House Chores While She’s Away And Blames Half Of It On Her first appeared on Bored Panda.