Dress codes and uniforms are usually a touchy subject, and they’ve caused a lot of issues at work, school, and even in gyms, as we’ve covered on Bored Panda before. Usually, there’s a handbook that lists the rules for how people ought to dress in minute detail. However, no rules are perfect. If you’re perceptive and imaginative enough, you can always find a loophole. And sometimes—to make things poetic—that loophole concerns belt loops.

Redditor u/Left0fcenterr shared an inspiring story with members of the r/MaliciousCompliance subreddit about a nice restaurant she used to work at when she was younger. A new male manager started giving the female employees a lot of trouble, criticizing them for things that were absolutely ridiculous. At one point, he started having a problem with the OP not wearing a belt.

The woman approached the situation creatively, following the restaurant’s own rules about uniforms to the letter, to teach the manager a lesson. Scroll down for the full story, dear Pandas! What do you think of the redditor’s approach? Have you ever had to wear a uniform at work or elsewhere? Have you ever dealt with a rude manager? Share your thoughts and experiences in the comments.

Bored Panda has reached out to u/Left0fcenterr via Reddit. We’ll update the article as soon as we hear back from her!

Dress codes at work can cause quite a headache. Especially if one of your superiors is very particular about tiny details 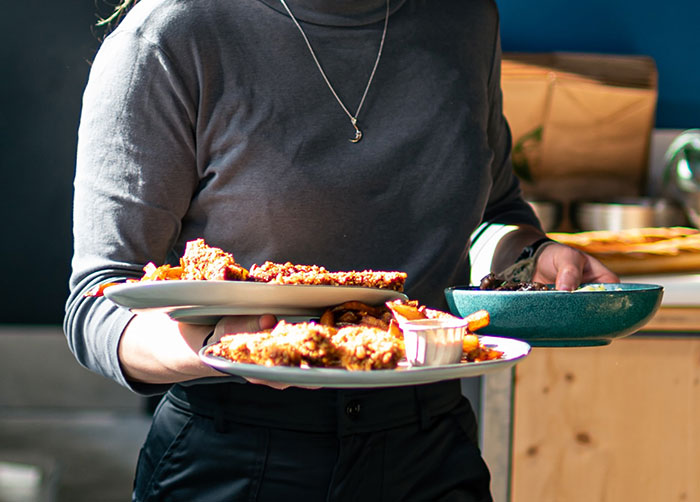 A former restaurant worker shared how a new manager had written her up for not wearing a belt. She stood up to him by following the employee handbook to the letter 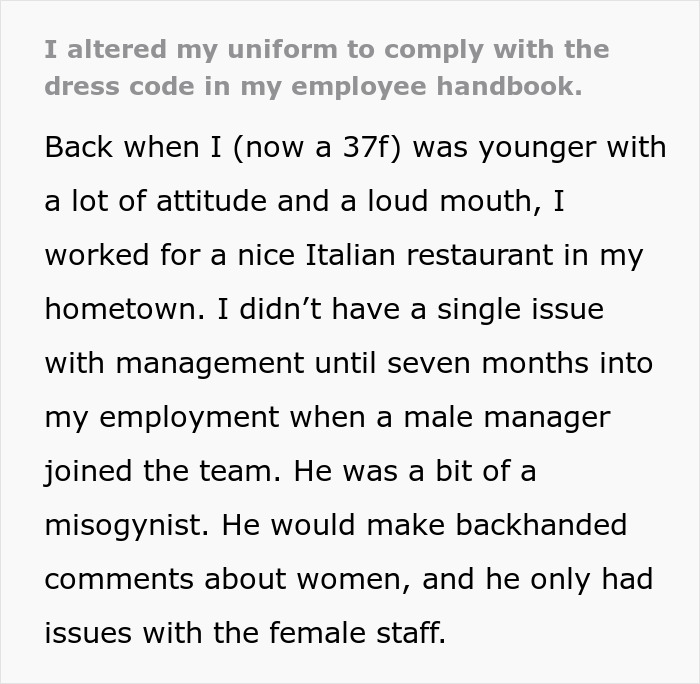 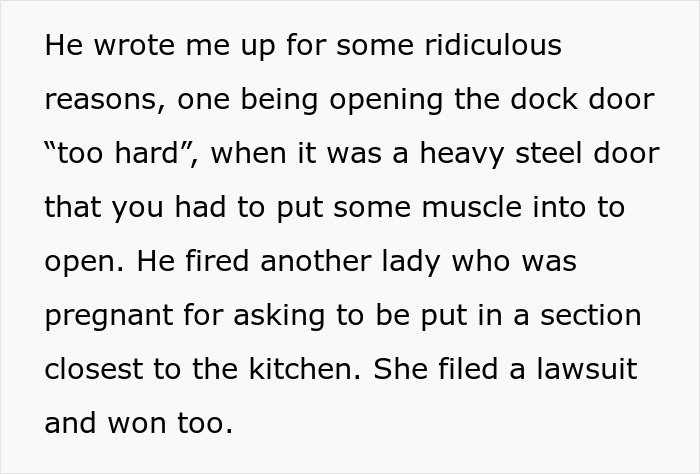 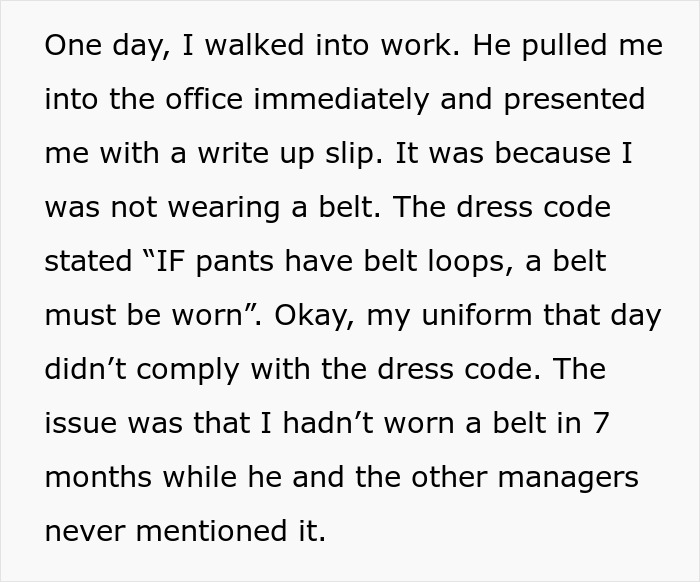 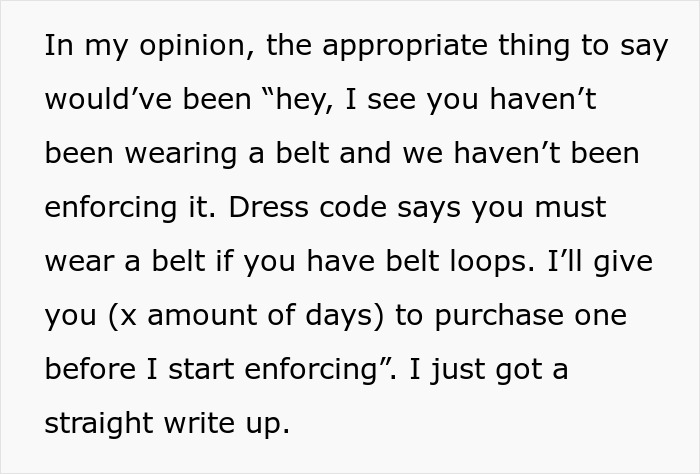 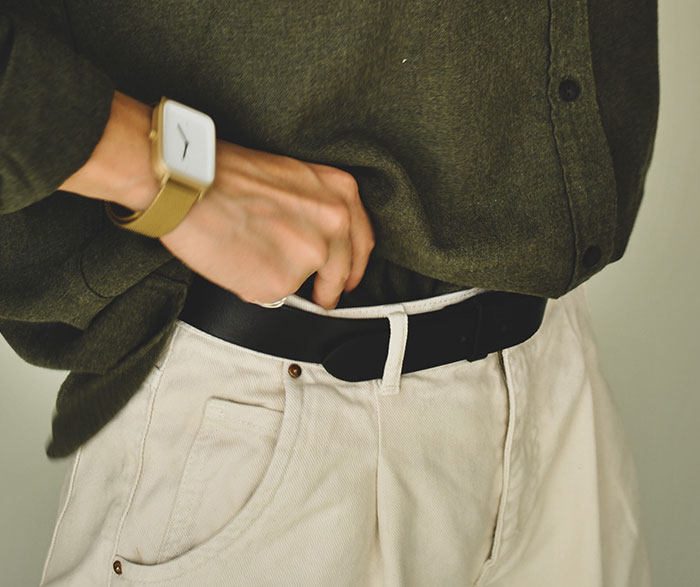 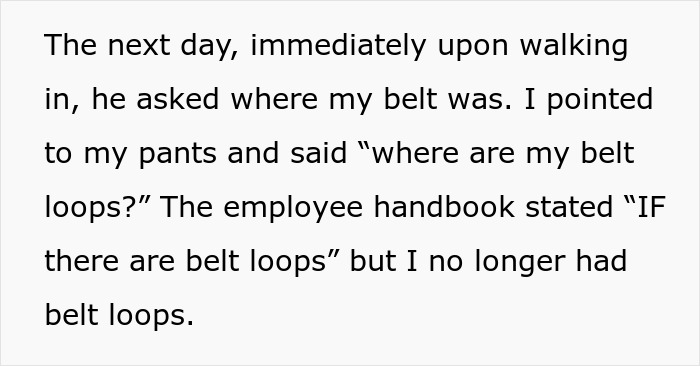 The woman’s tale about how she altered her work uniform to technically comply with the dress code was incredibly popular with the crowd on r/MaliciousCompliance. At the time of writing, her post had gotten a whopping 30.8k upvotes (and counting). It seriously impressed the internet… and even inspired some of them to make puns about loops and belts and buckles. (Fans of puns like us couldn’t be happier!)

The OP wrote on Reddit that she felt like a hero, standing up to her manager like that. What’s more, she did that following the rules to the letter. And, some of you Pandas might agree, there are few things in life than rules-lawyering someone who totally deserves it.
Dress codes are a topic that we cover here on Bored Panda time and time again. Problems tend to arise when someone with power and authority tries to shame others for now following the rules ‘properly.’ Publicity is actually a great antidote to this kind of unfairness: people quickly change their tune when they realize just how little empathy and common sense they had.

Another way to tackle these clothing issues is to put the dress code and all of the stipulations in the handbook under the microscope. Odds are, you’ll find way more than just one loophole there. Use the rules to your advantage if you feel that management is being unfair and creating problematic mountains out of non-issue molehills.

A while ago, Bored Panda interviewed workplace expert Lynn Taylor, the author of ‘Tame Your Terrible Office Tyrant’ and the CEO of the fashion brand ‘Behind the Buckle.’ She shared her insights on work uniforms, how things have changed since the pandemic, and the importance of learning to ‘manage up.’

“The pandemic shifted priorities for many operations, with a greater focus on bottom-line productivity. Where people sit, work hours and apparel naturally became more trivial. Executives also realized that comfortable clothes worn during the pandemic made them more productive and comfortable, too,” the workplace expert said to us, earlier.

“20 years ago, wearing jeans to work was taboo in many larger corporations, except for a ‘casual day,’ largely an unfamiliar term today for most millennials and Gen Z. Now jeans have become more of the corporate uniform,” Taylor said.

“Jeans are often accompanied by proper, presentable shirts and tops. And because of their pervasiveness—more ancillary wardrobe items, such as blazers, accessories (shoes and belts), now assume greater importance in upgrading one’s professional appearance,” she explained how things have changed. However, this newfound sense of flexibility and freedom isn’t available in all parts of the job industry.

“The caveat is that when people congregate in the office or with clients, few companies will have an ‘anything goes,’ policy. While dress codes have become significantly more relaxed at all levels, those who push the limit will likely be admonished. Companies are still enforcing some level of dress code decorum,” Taylor told Bored Panda before.

Meanwhile, it’s essential to figure out why your boss might be so stressed about everyone following the rules. Try to see things from their perspective, get a sense for what they value and why. “Bosses may be concerned about their superiors and their own career… and what might occur if they don’t deploy certain rules and regulations. They may also have strong feelings on workplace issues and feel it is their prerogative to enforce them,” the expert said.

“Managing up is a skill that will never go out of style and always be a helpful career tool, as you move from one job to the next. Employees can be the voice of reason; show the pros and cons of a decision, and gather support from other colleagues. There is power in numbers when trying to shift a boss’s perspective, especially if the rationale is well documented and persuasive.”

Some internet users were interested to hear some more details 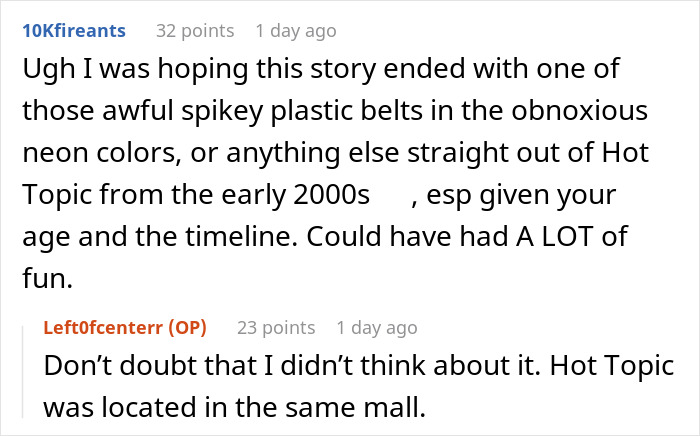 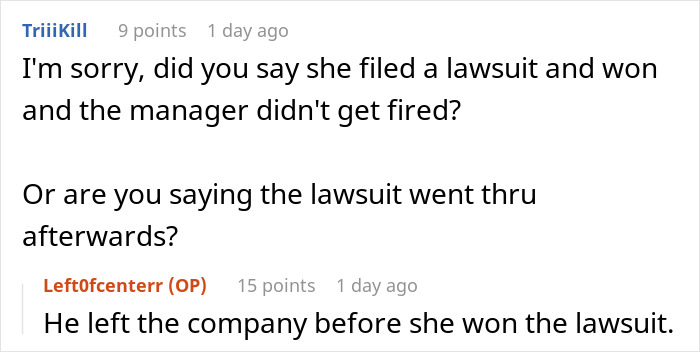 Some folks shared their personal experiences with dress codes at work 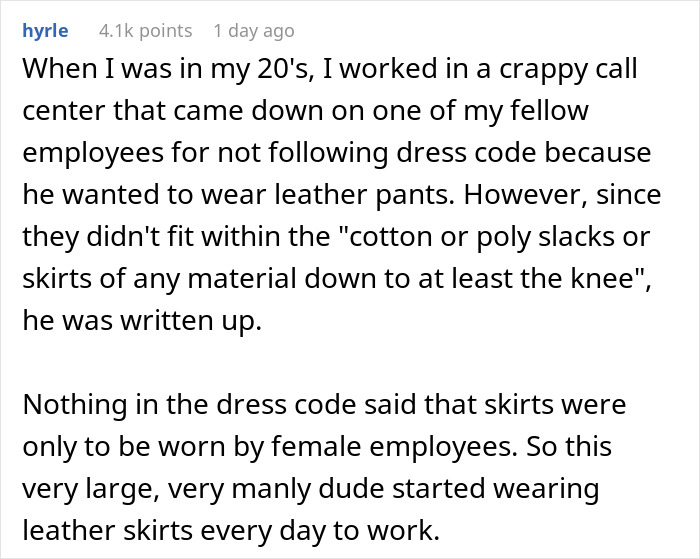 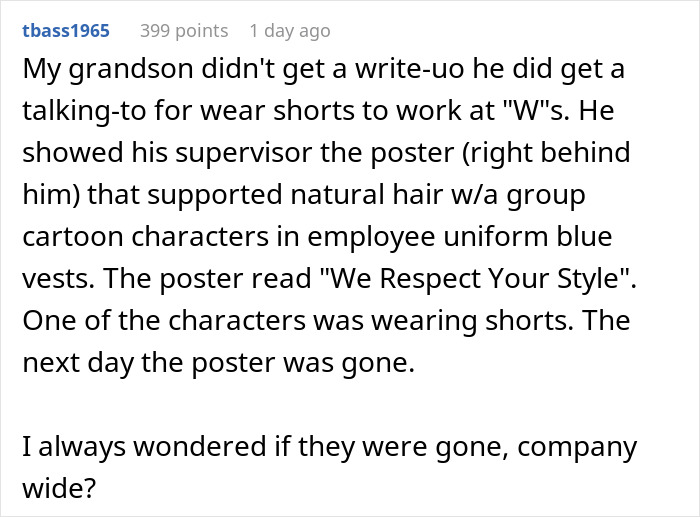 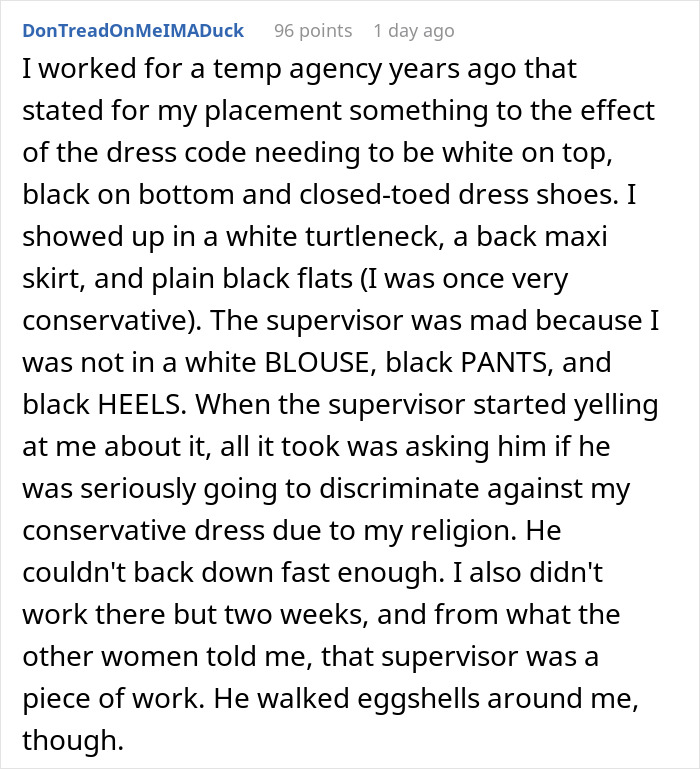 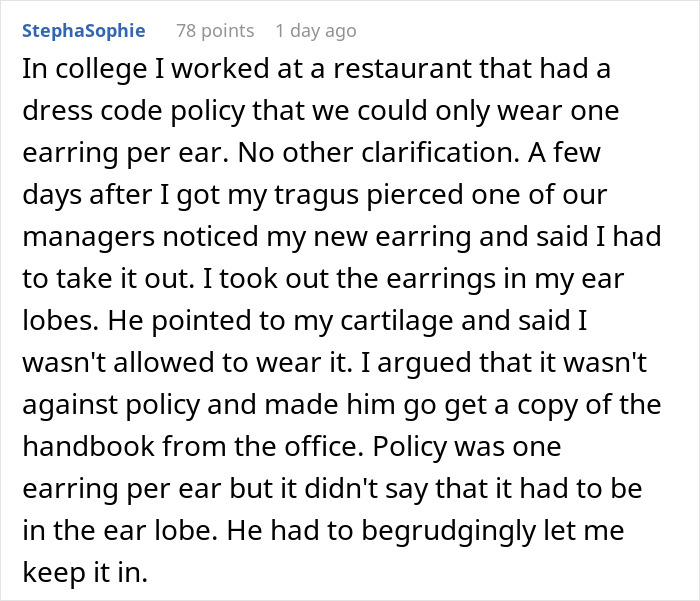 Here’s how some people reacted to the story 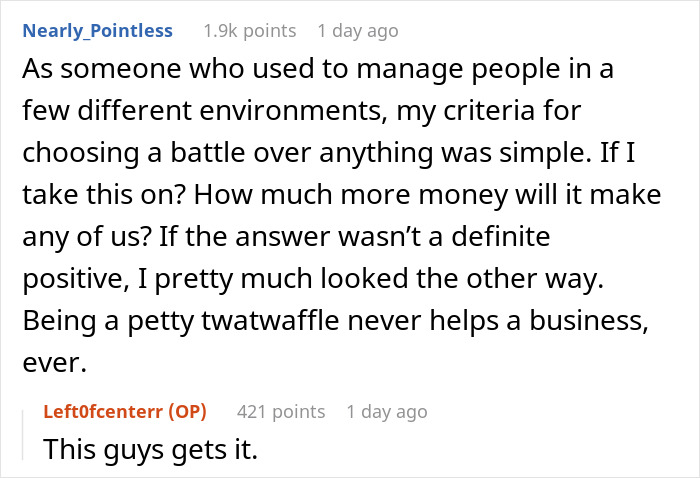 The post “It Didn’t Make Him Like Me Any More”: Employee Altered Her Uniform To Comply With The Dress Code first appeared on Bored Panda.