At this point, it’s probably quite safe to say that most folks watch the Kardashians not because they actually want to see how rich folk live or learn a thing or two about success, but rather are wondering “what ridiculous thing will they come up with next?”

The family is known online to be extremely out of touch with reality, with Kylie Jenner’s unorthodox approach to cutting cucumbers, Kylie’s and Kris’ adventures at the drive-through car wash, and now Kylie Jenner’s 3-minute flight with a private jet.

And, as you might have already guessed, folks online were very unhappy about it because of how unnecessarily un-eco-friendly this entire display of luxury life was. 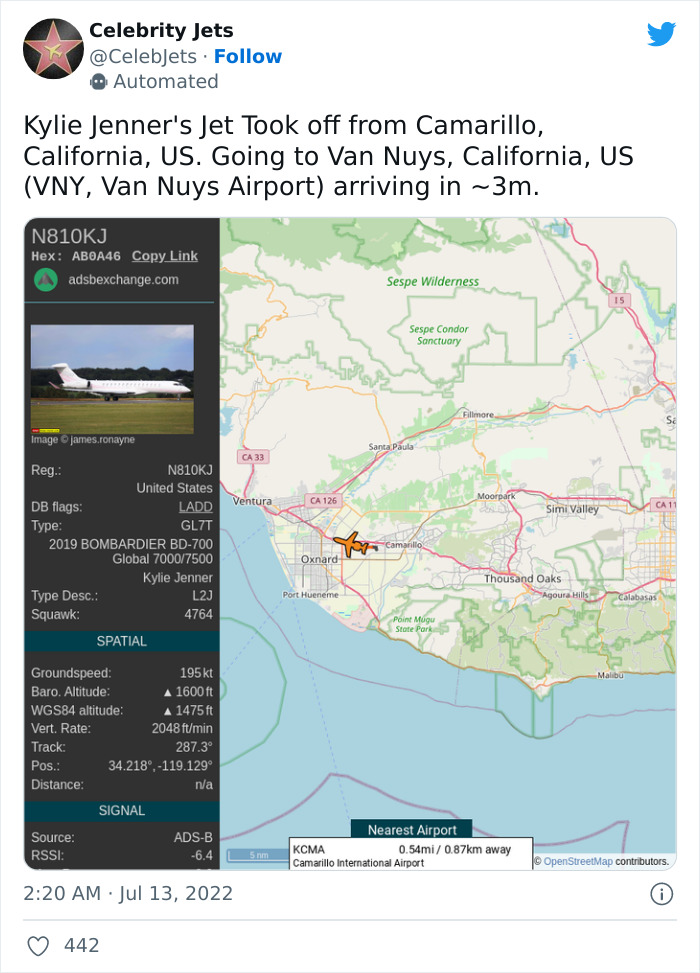 In context, these two locations are 40 miles and roughly the same amount in minutes apart if you’re traveling by car. But screw that and screw Earth, because taking a jet is apparently more than 10 times faster, minus all the prep work to even get the jet ready for flight and all that jazz.

The flight took place between the Camarillo Airport and the Van Nuys Airport, just a 40-mile distance apart 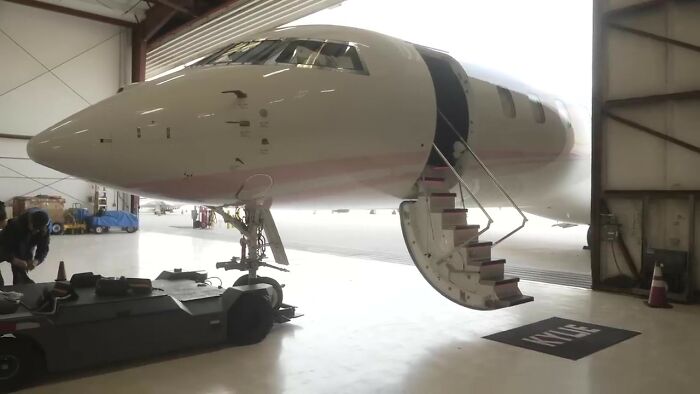 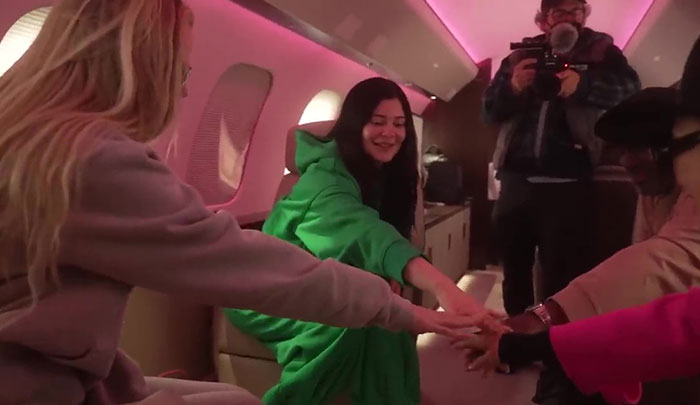 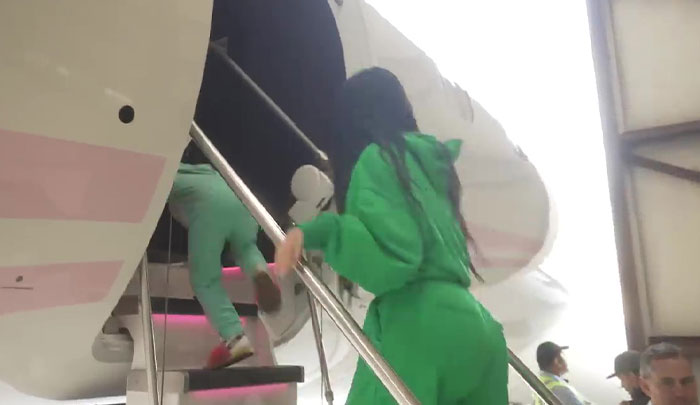 This was supplemented with an Instagram post from Kylie with a black-and-white picture of her and her husband, hip-hop artist Travis Scott, trying to decide whose private jet they’d take for the trip.

Well, the first ten or so comments, including those of other Kardashians, were all “hooray”, but then we get to the real internet part where folks had their hands up asking “what the heck, Kylie?!” 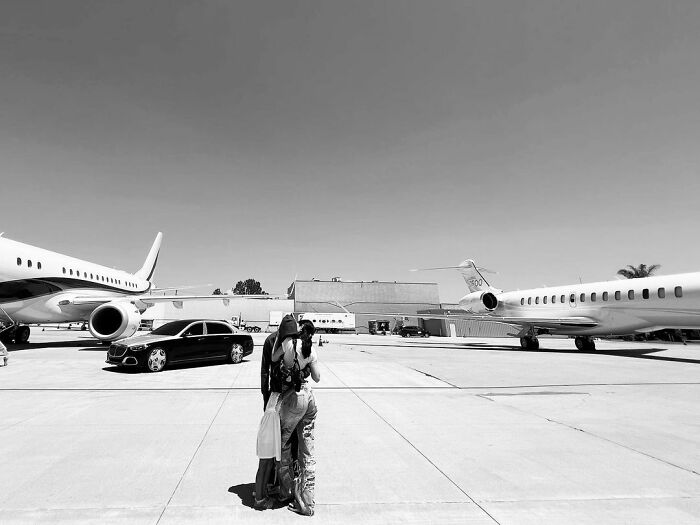 OK, so let’s break it down. For the most part, much of the reaction amounted to calling Kylie a “Full-Time Climate Criminal” for flying private. Why? According to Transport and Environment, private jets can be anywhere from 5 to 14 times more polluting than commercial planes and 50 times more polluting than trains. And while technically cars aren’t as CO2-effective as planes due to the gas to passenger per distance ratio, even that would have been much less polluting than a private jet given the distance. 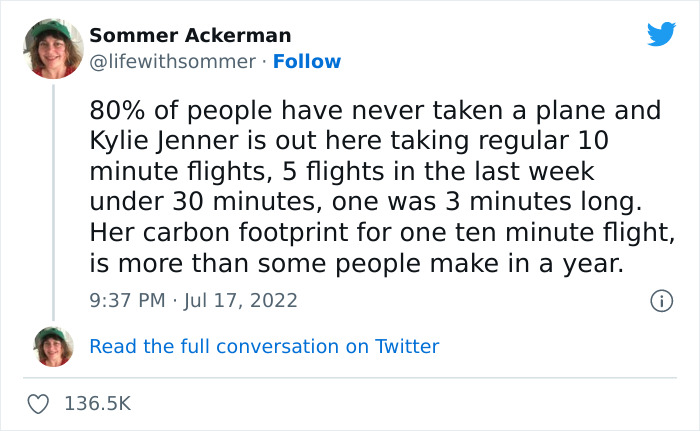 Hence, folks were complaining why the majority of the planet now suddenly has to choose paper straws and wooden cutlery and paper plates and eat less beef and cycle to work and recycle everything and reduce waste and you get the point, while Kylie takes a 3-minute flight and negates all of that with a snap of the finger.

In contest, private jets are 5–14 times more polluting than commercial flights and 50 times more than trains, calculating per passenger 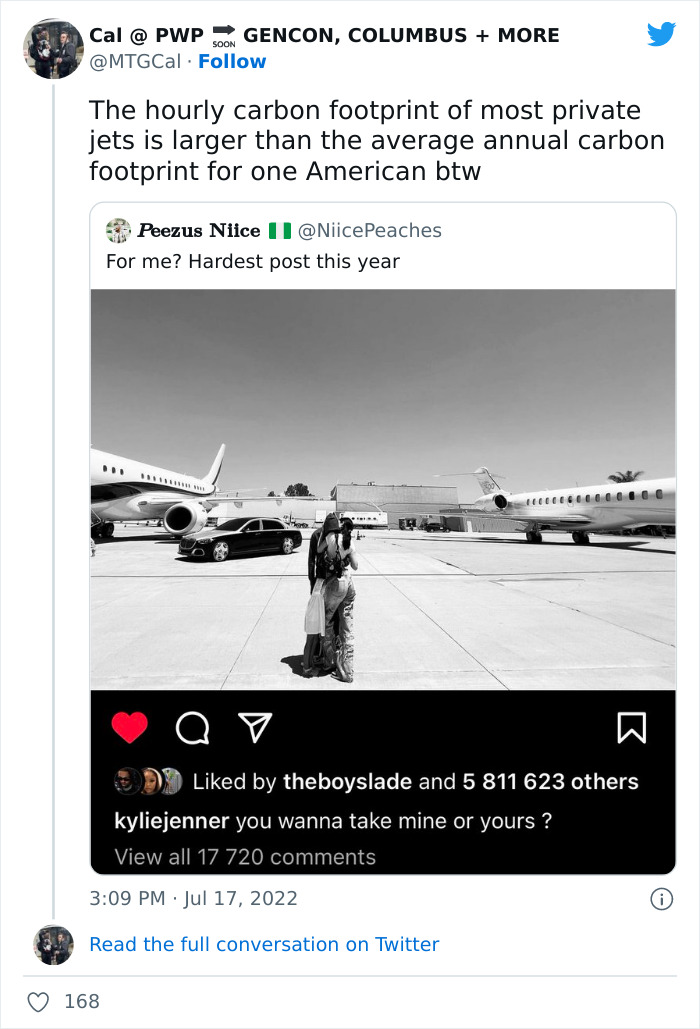 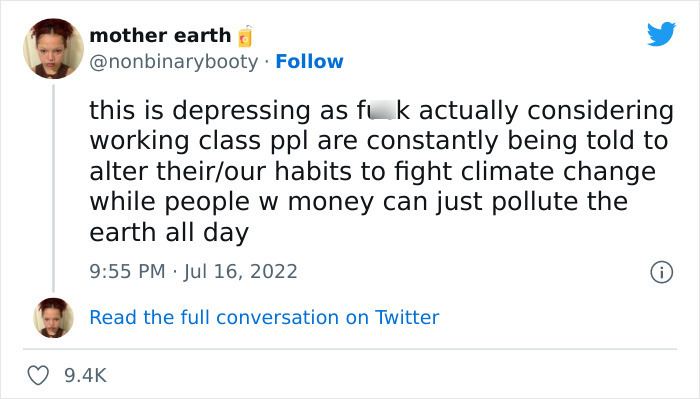 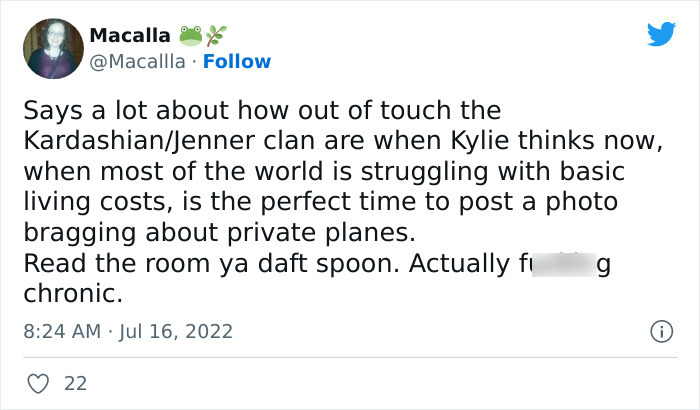 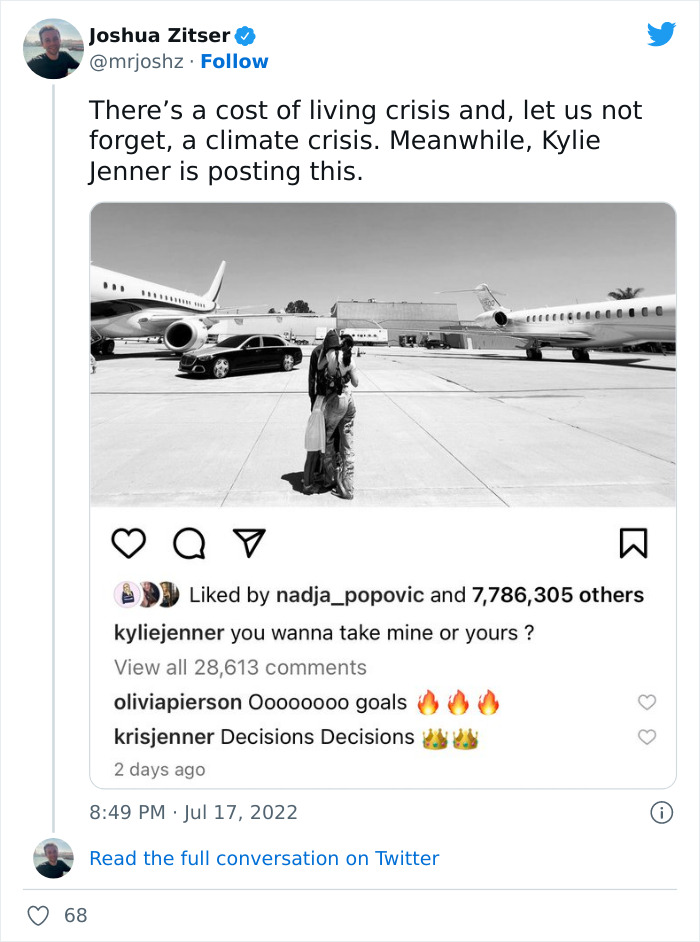 The worst part is, Kylie takes regular flights, most averaging under 30 minutes in duration 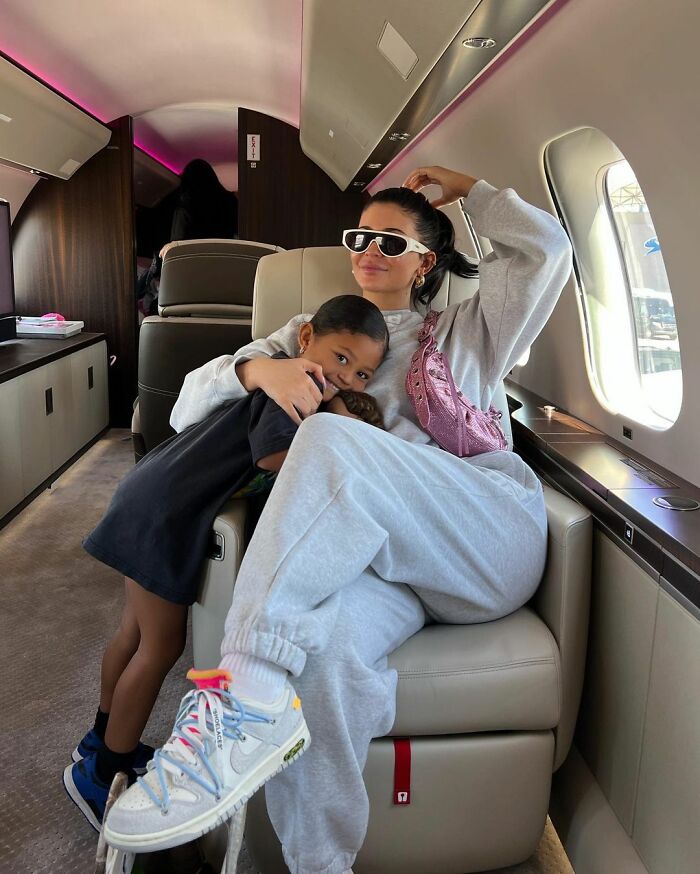 This is besides her bragging about her wealth, which some folks had a problem with. Such a move not only is very not good for the environment, but it also enforces the idea that the lower classes need to now alter their habits so that rich people can get away with literal planetary murder in the form of air travel.

The worst part is, Kylie Jenner takes very short flights quite regularly. Like this 12-minute one, and this roughly 4-6 mile flight, and this 17-minute flight, and this 6-minute fight… you get the idea. Sure, there are 25-35-minute flights reported there too, but that doesn’t help the case that she’s flying very often, and each flight means tons of emissions that we as a species are trying to minimize. 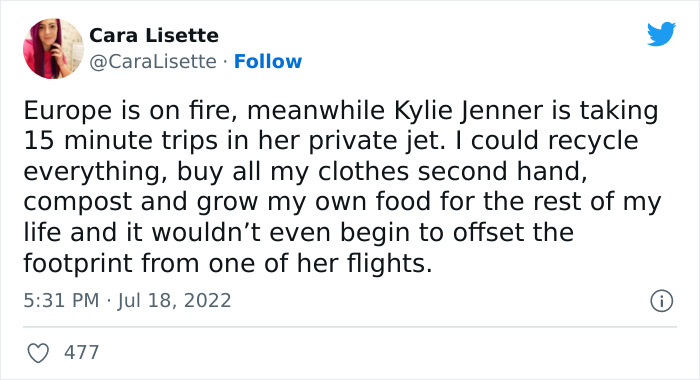 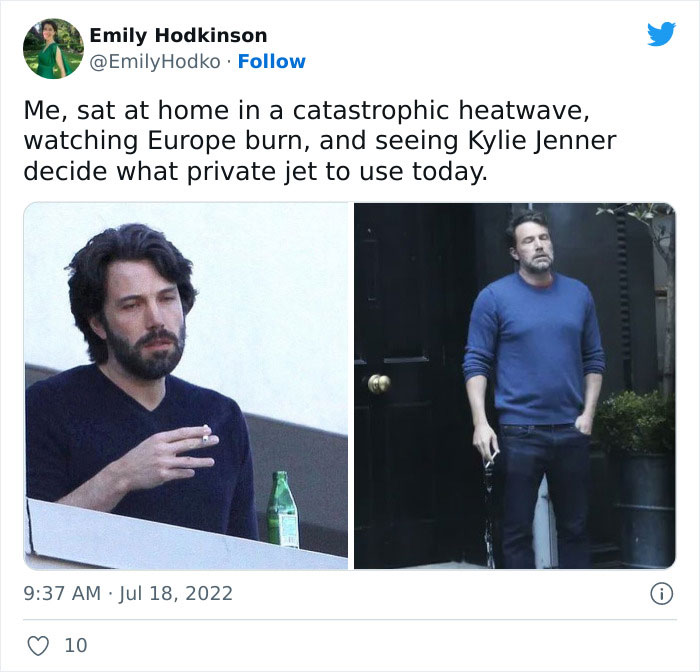 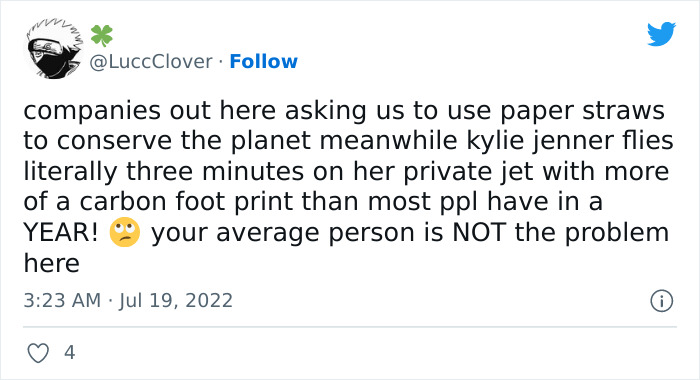