Things can get very confusing when people in your family have the same names. For instance, my dad and I have the same name and things still get hilarious when we meet up. It’s a lot of fun, but it can make anyone outside the family feel a bit lost. So, naturally, quite a few internet users had some very strong opinions when they read a story about identical names on the AITA subreddit.

Reddit user u/Deadlybutterknife, from Australia, shared a story about how they voiced their opinion out loud that it was completely ‘idiotic’ for their coworkers to give their newborn twins names that are pronounced identically: Sean and Seen. What’s more, the two parents’ last name is also Sean, so they were having quite a lot of fun imagining how surprised people would be to meet their kids in the future.

However, the story took quite an unexpected turn: after the redditor’s rather candid outburst, the parents reacted in a very surprising way. Scroll down for the full story and share your thoughts with us in the comments.

The author of the story, redditor u/Deadlybutterknife, told Bored Panda that they’ve worked with both of the coworkers for 12 years across three companies and multiple role changes. “We have a good rapport and a lot of trust between us. They are good-natured and funny people, you can tell them anything and as long as it’s honest they’d consider it,” they explained why they were able to be so candid about the whole naming situation. “A lot of people got hung up on me being mean about it, but the reality is, we have that kind of relationship.” 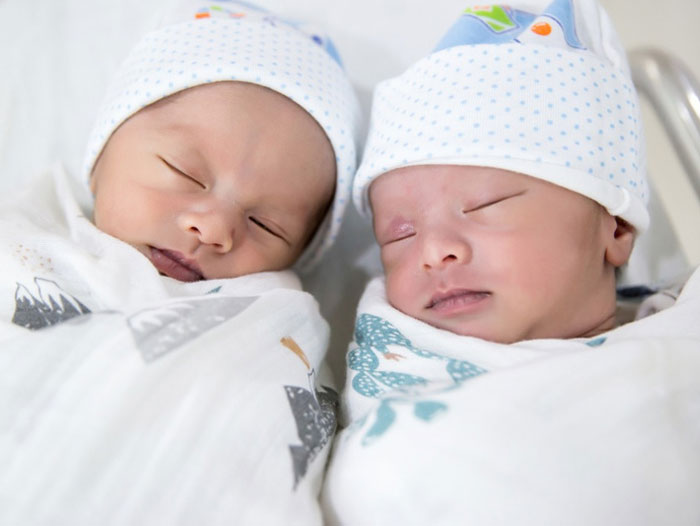 What’s more, the parents wanted their kids’ names to sound the same as their family name 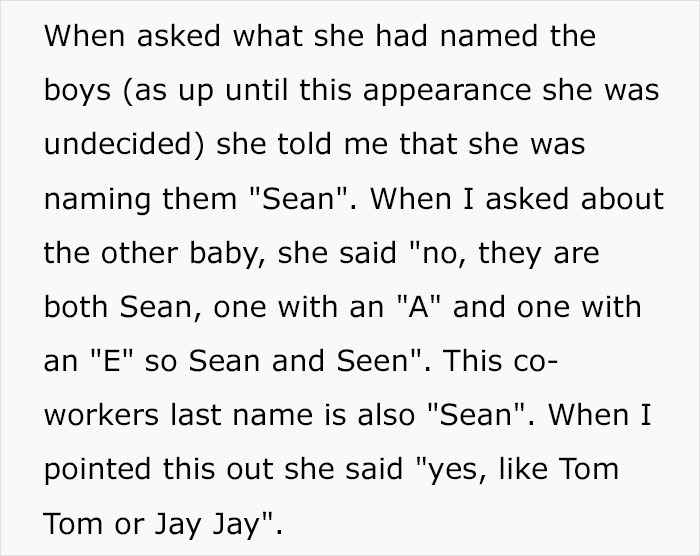 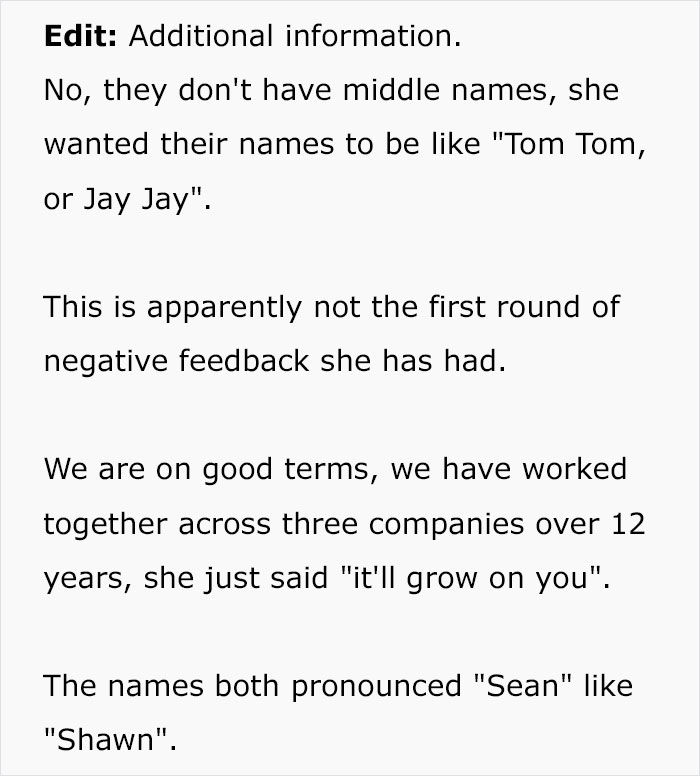 The parents acted somewhat surprisingly after getting called out 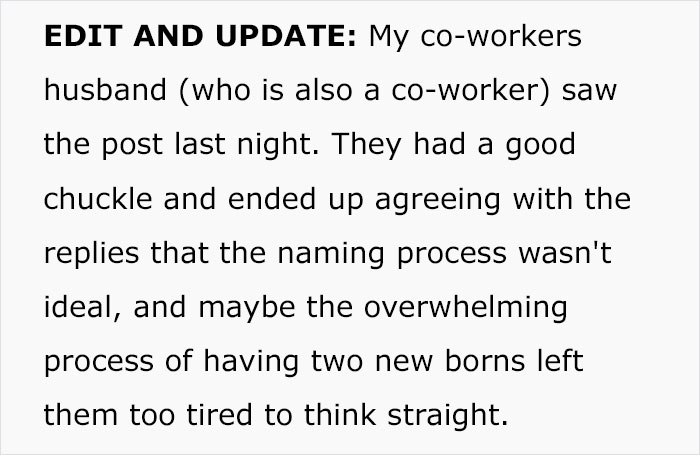 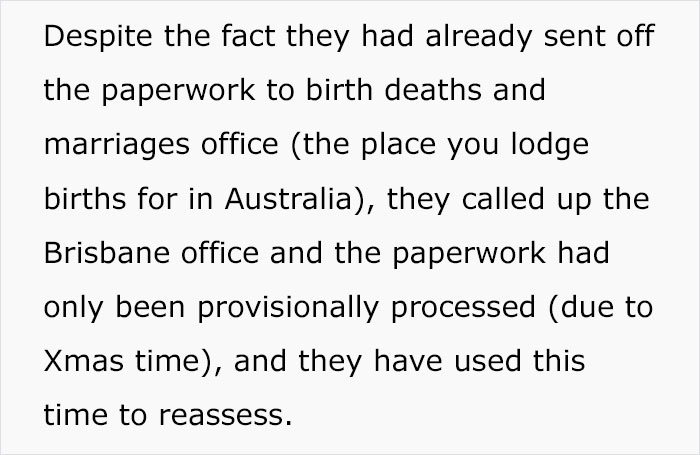 However, the author of the story got into some trouble with HR

The most shocking thing to me was that the parents actually took their coworker’s comments in stride. In fact, they changed their minds and they’re planning on giving Seen a different name. However, the other twin will end up being named as originally planned. First name: Sean. Family name: Sean.

The author of the story ended up getting reported to HR for their post on the AITA subreddit. Ironically, it wasn’t the parents who reported them, as they thought the entire comment about matching names being ‘idiotic’ was pretty hilarious.

However, on a more serious note (and something that a few redditors picked up on), parents have a very important responsibility when picking out names for their children. They have to think about how other people, especially other kids, will react at school when they hear their name. Incredibly original names can increase the risk that the kids will become targets for bullies. On the flip side, bullying is never okay, for any reason.

Lauren Seager-Smith, the CEO of Kidscape, a UK-based charity that aims to keep children safe from harm and abuse, told Bored Panda earlier that “bullying is never acceptable.”

Kids can get bullied for a variety of reasons, whether it’s having a ‘funny’ name, wearing glasses, their family situation, being overweight, etc. Lauren said that kids need a lot of support from their parents and social circle when somebody attacks the things that make up their identity. These attacks are very tough to bear.

“Never underestimate the impact of bullying, understand what your child needs to feel safe and if the bullying is in school—make sure you let the school know the impact of the situation,” Lauren said.

“You may also want to seek out opportunities to build your child’s confidence and assertiveness skills so they can feel proud of who they are,” she suggested that parents can encourage their kids to become more emotionally resilient when dealing with bullying that shouldn’t ever happen at school or outside of it in the first place. 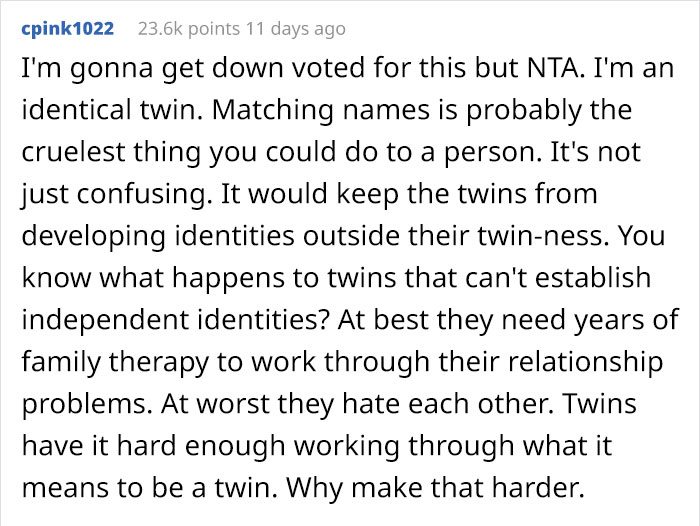 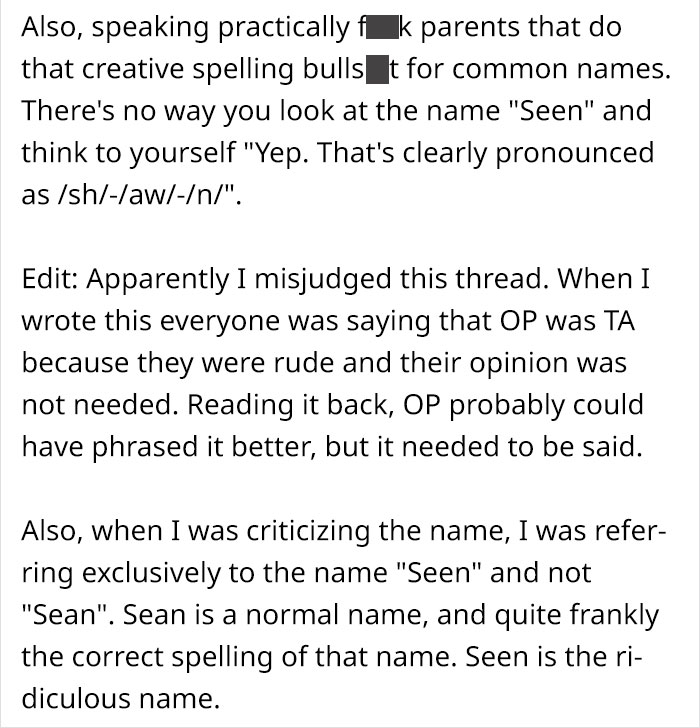 The post New Mom Gives Both Twins The Same Name As Their Surname And People Have Some Thoughts first appeared on Bored Panda.