Remember when you were a kid and your teacher asked everyone in your class what they’d love to do when they grow up? There was bound to be at least one kid (maybe it was you!) who said they were going to be a pilot. And some people followed through on that dream, making it a reality through iron determination and tons of effort.

Now, imagine that after all of that hard work you still don’t get the recognition you deserve because of your gender… in 2022, no less. Pilot Sabrina Johnson went viral on TikTok after posting a video about how a gate agent asked her if she was a flight attendant. Even though Sabrina was wearing her pilot’s uniform. Apparently, this is quite a common occurrence for the 22-year-old pilot who has a jaw-dropping 8 years of experience.

You’d expect that in this day and age that most people would look past someone’s gender, especially those working in the industry when they deal with their colleagues. Scroll down for Sabrina’s post and how the internet reacted to the entire situation.

Bored Panda has reached out to Sabrina via Instagram, and we’ll update the article as soon as we hear back from her!

Pilot Sabrina Johnson, 22, has been flying ever since she was just 14 years old 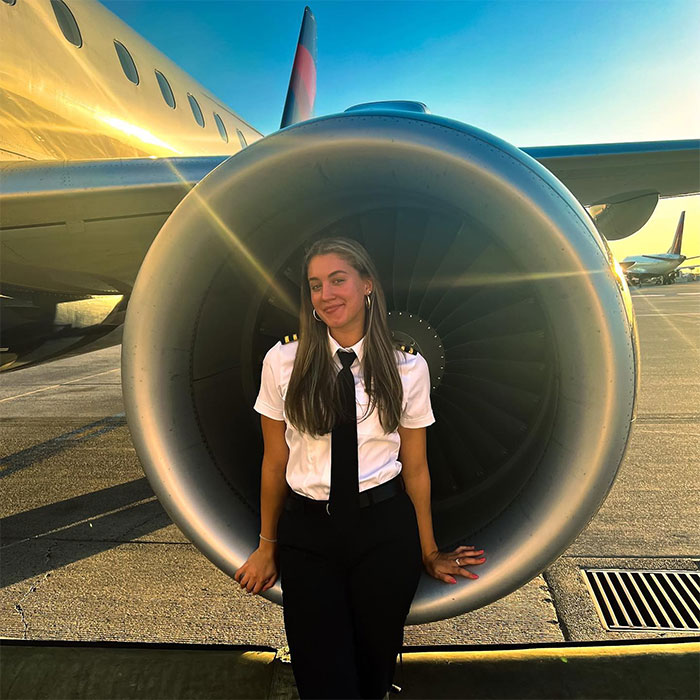 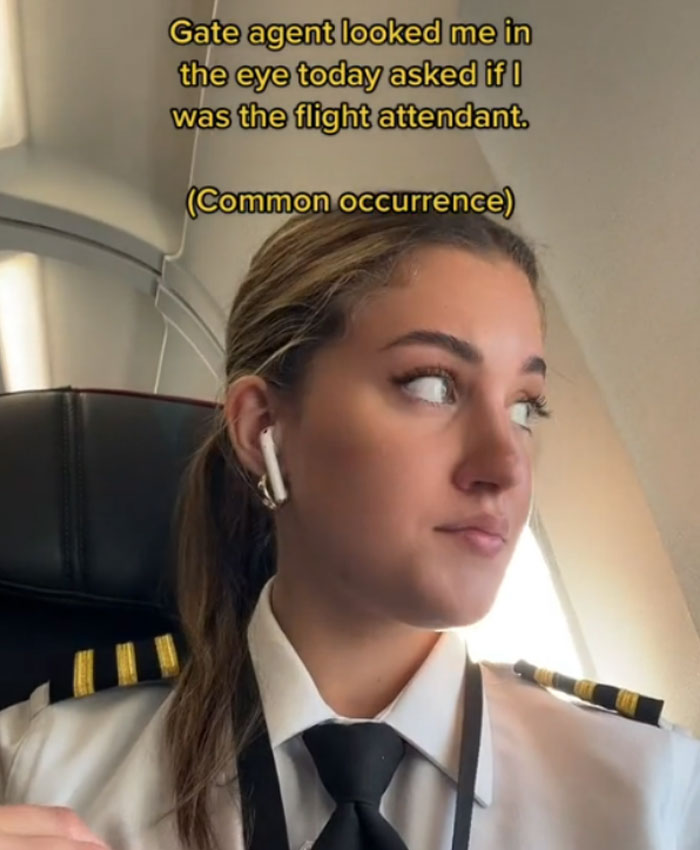 Check out the full viral TikTok right over here

@sabrinaleej Its jarring to me because they work at an airport. You know what the pilot uniforms are

Sabrina, aka @sabrinaleej, is a 22-year-old airline and helicopter pilot, as well as a flight instructor. She’s a real inspiration for anyone who ever dreams of flying in the sky, and is living proof that with enough hard work and dedication, any career path is possible.

She actually has 8 years of flying experience which is incredibly impressive. Imagine starting now and dedicating the next decade or so to a singular pursuit. Naturally, you’d expect people to treat you with the same respect as anyone else who has amassed such a massive wealth of experience and proven themselves over and over (and over!) again.

“It’s jarring to me because they work at an airport. You know what the pilot uniforms are,” Sabrina wrote beneath her TikTok video, pointing out that gate agents should definitely know better.

In a follow-up video, the pilot mentions that being called a flight attendant isn’t an insult. It’s only an insult to her and to flight attendants when it’s used to try and put her down after all of her hard work.

In another video, Sabrina went into detail about what her professional life looked like ever since she was a teenager 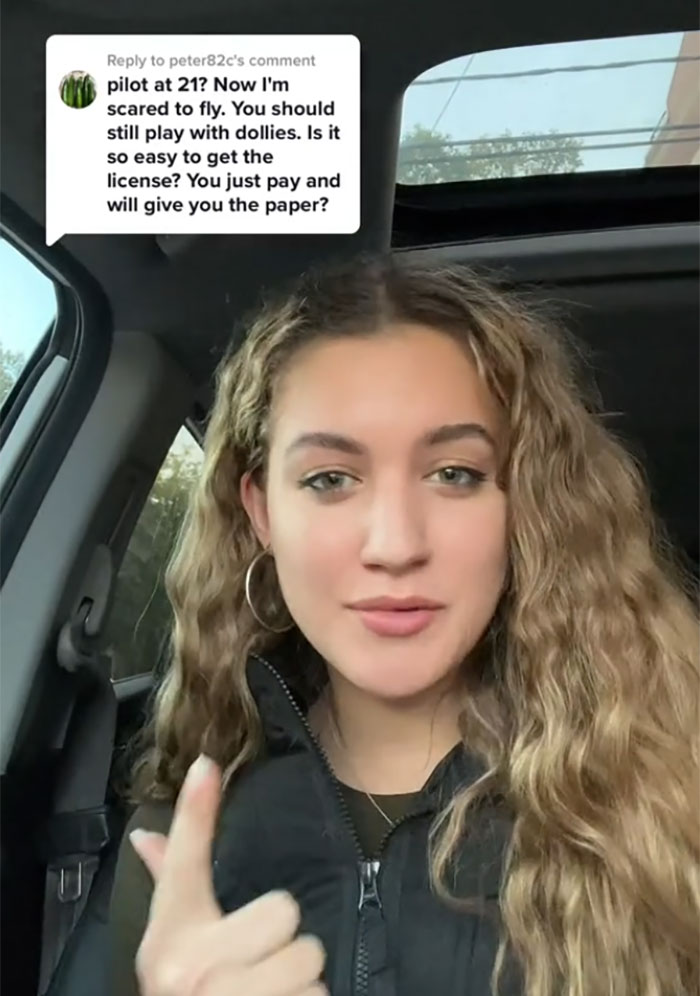 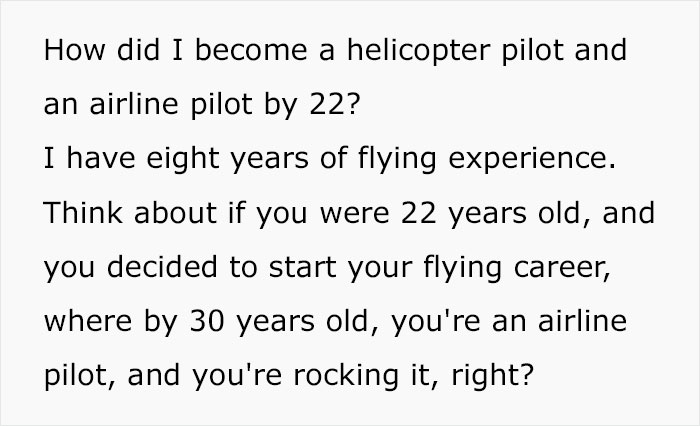 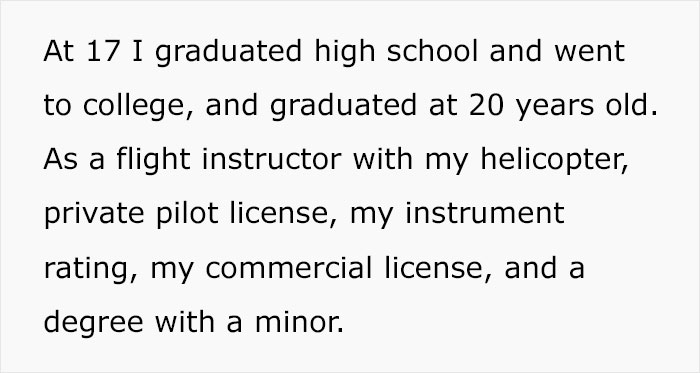 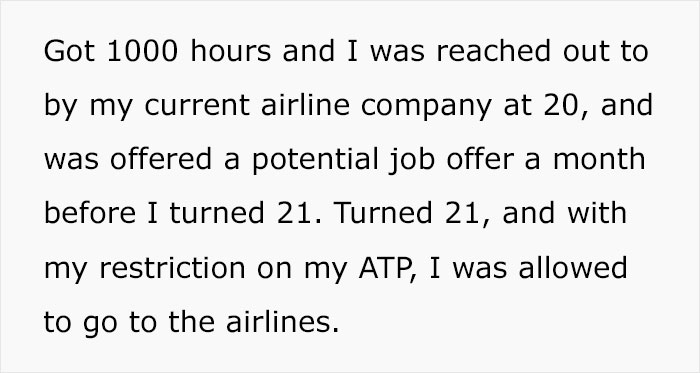 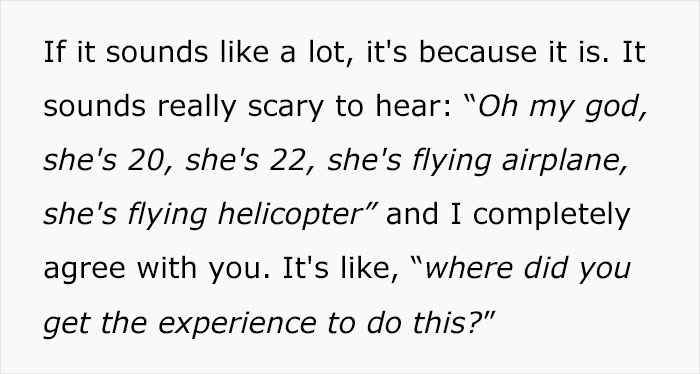 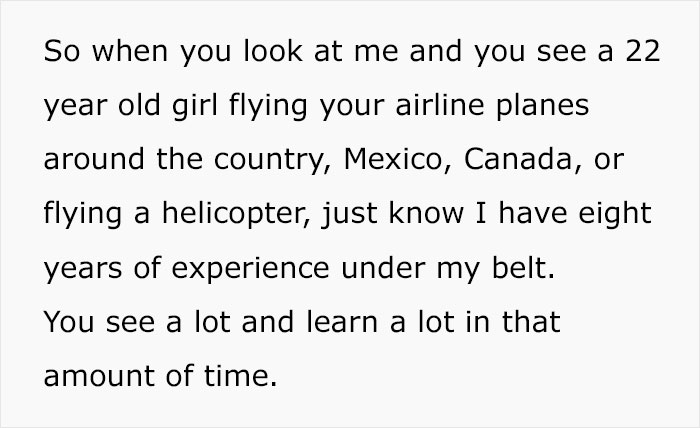 Here’s the pilot’s video about her career, in full

To reiterate, Sabrina has 8 years of experience flying. “If it sounds like a lot, it’s because it is,” Sabrina points out in one of her videos, referring to all of the effort and sacrifices over the past 8 years. She also pointed out that by the time she’s 34, she will have a whopping 20 years of flying experience.

She started flying at the age of just 14, helped along by her super supportive parents. She made her very first solo flight on her 16th birthday and became a private pilot by the time she was 17. That’s when she finished high school and went to college.

After 3 intense years, she graduated at 20 years of age as a flight instructor, with a helicopter pilot license, with her commercial license, as well as her degree (with a minor, too). She got great results by studying throughout the year, even during her vacations. She has little-to-no social life.

An airline then offered her a job and she officially became an airline pilot at 21. Right now, she’s also working on becoming a flight instructor for helicopters. So what you’re seeing right now isn’t just a 22-year-old in the cockpit: you’re seeing a seasoned pilot with tons of experience and the drive and discipline to fulfill the goals that she’s set for herself.

According to Zippia, there are currently just over 29k pilots employed in the United States. 29.3% of pilots are women while 70.7% are men. The average age of a pilot is 45 years old. Unfortunately, in 2021, it was reported that female pilots earned just 83% of what their male colleagues did. In short, there’s still a long way to go until everyone gets recognized for their hard work the same, regardless of their gender.

Meanwhile, check out how some internet users reacted to Sabrina’s TikToks 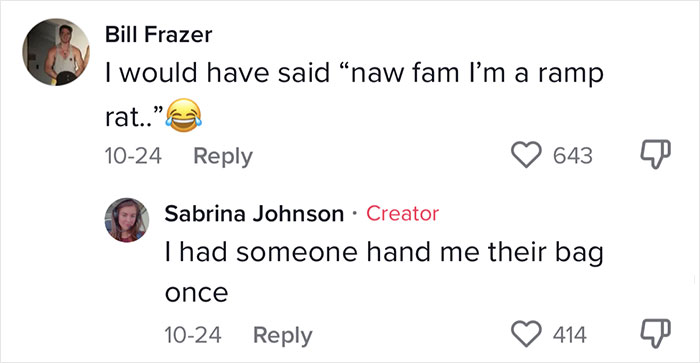 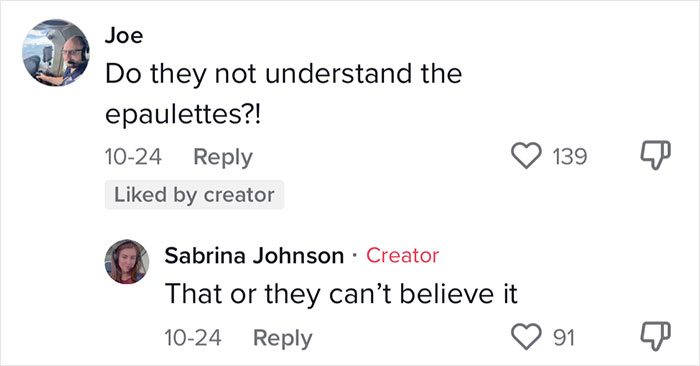 The post Pilot Gets Mistaken For A Flight Attendant, Calls This Out In A Viral TikTok Video first appeared on Bored Panda.