Even in a world where the conversation around accessibility in design is picking up steam, this critical principle still remains seen as an accessory to a design rather than a central focal point. As global design studio Idean puts it, “inclusive design is often seen as a ‘nice-to-have’ or simply a check-box exercise to meet accessibility guidelines. Speaking to organisations about designing for vulnerability, we often hear that ‘they’re not the user group we’re trying to reach’ or ‘we don’t have the budget for that’.” But the fact remains that the exclusion of focus on accessibility doesn’t just hurt those with specific needs, it lessens the quality of a design overall.

To combat this lack of focus on inclusive design, Idean had an idea to gamify the design process with the creation of “Cards for Humanity”. A riff off the popular card game Cards Against Humanity, players draw two cards, one card representing a person and the other, a trait. Combined, these two cards create a user scenario—for example, “Aston Wall, 20, is very caring… and is blind”—and the back of each card further elaborates on design considerations for each need. 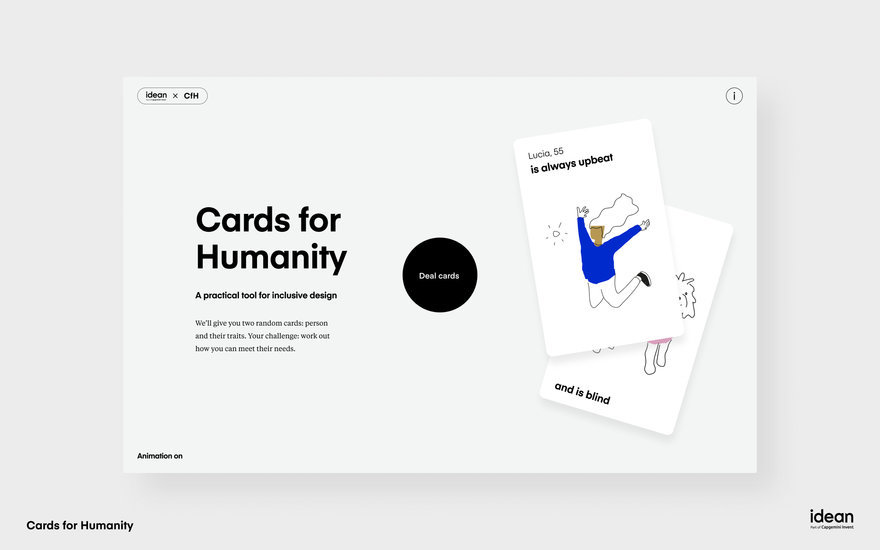 The game is intended to make the process of inclusive consideration more intuitive. The Idean team explains that the game was built to “test new propositions, generate ideas or audit products and services, helping organisations consider everyone’s needs at every stage of the creative process and embed an inclusive mindset.” 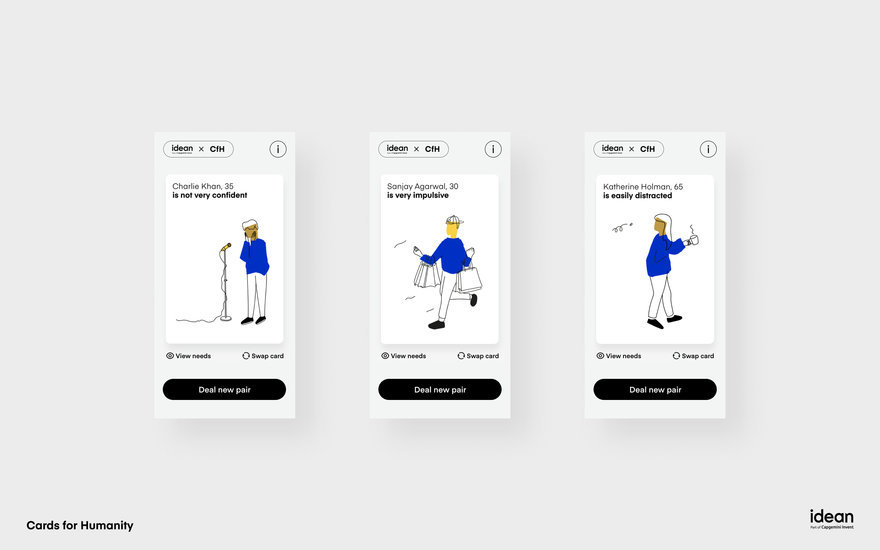 The idea behind Cards for Humanity began as a collaborative workshop tool for people within the Idean team. After finding it incredibly helpful, the team of designers decided to expand on the idea and create an online version to be widely shared. To ensure the game was supported by research, Idean explored a full range of impairments and disabilities to consider. In addition to physical impairments, Cards for Humanity includes personality features like “disorganized” and “not very independent” in order to consider a full range of potential needs. After creating the cards, the team got to prototyping, testing and iterating within different teams in their global studios and in live projects in collaboration with large organizations. From this research, important iterations were made such as making sure color combinations were fully accessible and traits related to neurodiversity were added to the deck. 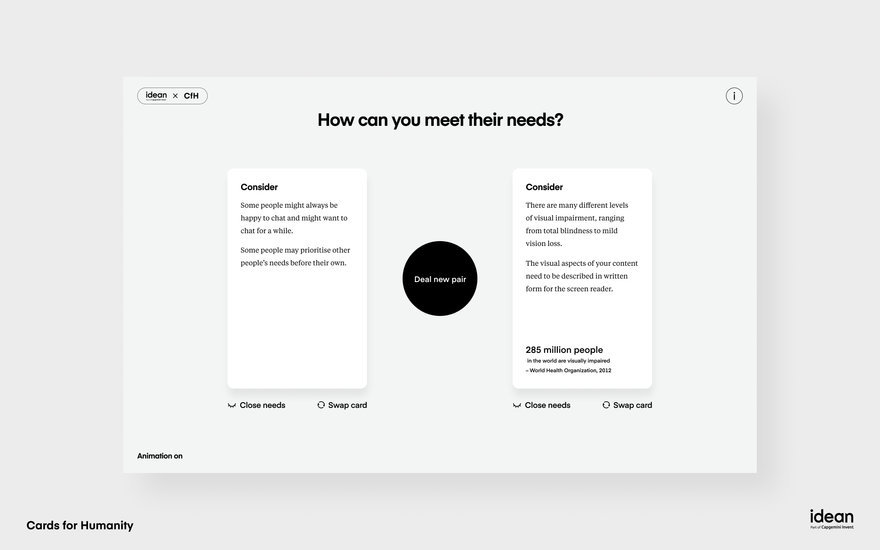 Since its creation, Cards for Humanity has been shared widely online and played by almost 21,000 people in over 119 countries. The team has also expanded the tools offering into a physical sets of cards, a workshop, an interactive website, and even a Figma plugin. As the Idean team puts it, “we see first hand that we tend to design for people with needs similar to ourselves,” and Cards for Humanity is a noble step in figuring out how to branch outside of one’s own perspective to ensure a product does as it is intended: and that’s to serve as many people as humanly possible, and to do it seamlessly.