We can’t shift the flow of time. As much as we feel like we’ve got all the time in the world to experience all we’re meant to, it one day creeps up on you that your time is running out. Instead of looking out for a new experience, a new adventure, you’re anticipating the end. But time is still going, so why not use it to the fullest?

There’s always something to do, to experience, to daydream about. But our belief and adoration of the little bits of magic all around seem to dim the longer the clock ticks. Should it, though? I say nay! And this is a story that will, hopefully, spark a little craving for child-like adventure.

A 100-year-old veteran would have one of the best days of his life exploring Disneyland after a young stranger came up to him on the street and invited him out. It’s touching, it’s motivating, it’s gonna make you curse at the onion ninjas. Let’s get into it!

Isaiah Garza, a fashion designer and online personality, approached a 100-year-old gentleman and asked if he’d want to go to Disneyland with him 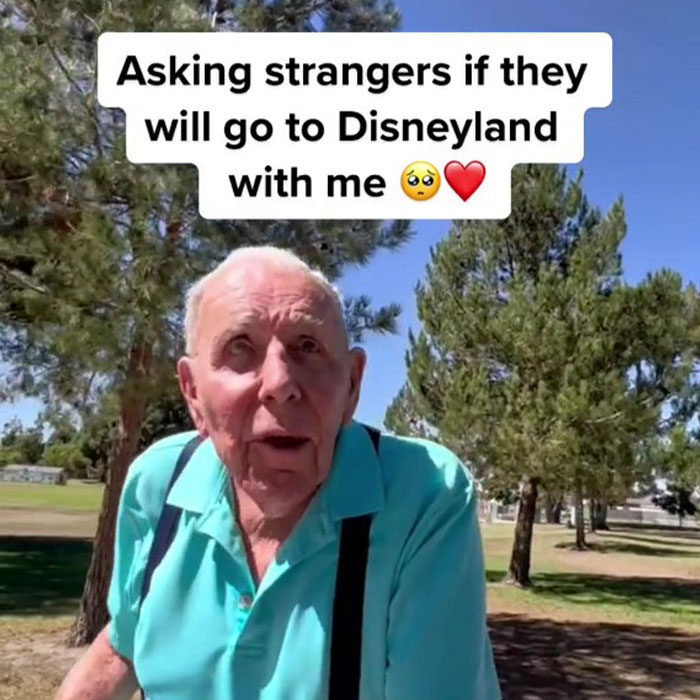 Isaiah Garza may have snuck onto your social media for one reason or another. Whether it be his jewelry collections or him changing the lives of strangers he comes by, he’s become quite a prominent figure online. “I’m here to spread love, make people smile & make a difference!” says his YouTube bio.

One day, he approached a 100-year-old veteran walking on the street and decided to invite him for a day at Disneyland. In a video he posted on TikTok, he can be heard saying, “I’m sorry to bother you, but I’ve had a really rough day. I just wanted to see if you’d be willing to go to Disneyland with me today?”

“Hey, you would really take me? Oh my gosh!” said the excited man, very much surprised by the uncommon offer, yet up for the adventure 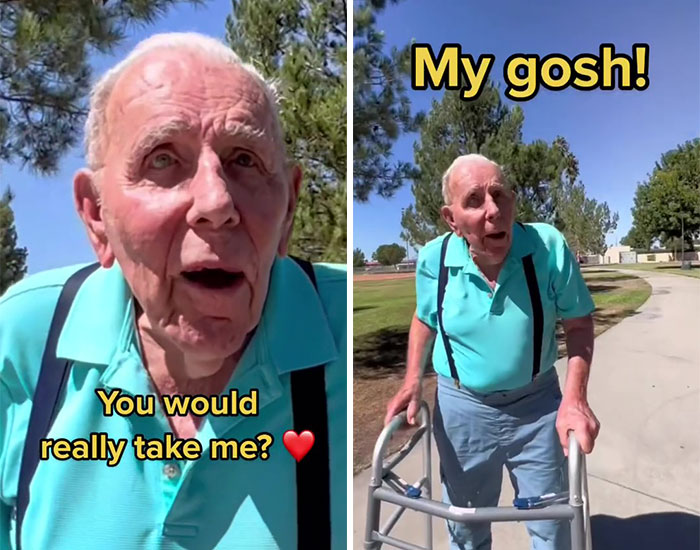 “Hey, you would really take me? Oh my gosh!” the gentleman excitedly exclaimed, clearly surprised by the uncommon offer, yet happy to oblige. What followed was a magical day, the two quickly becoming the best of friends.

The video, which has garnered 16.2M views and 3.3M likes, shows the man had exchanged his walker for a wheelchair, which Isaiah maneuvered around the park. The pair can be seen going on rides, enjoying treats, and meeting iconic characters, with Isaiah even getting the elderly man a pair of Mickey ears with a red bow in front. We can all agree that it looked like one magical day!

Throughout the day, the two became the best of friends, going on rides, meeting Disney characters, treating themselves to tasty snacks, and more 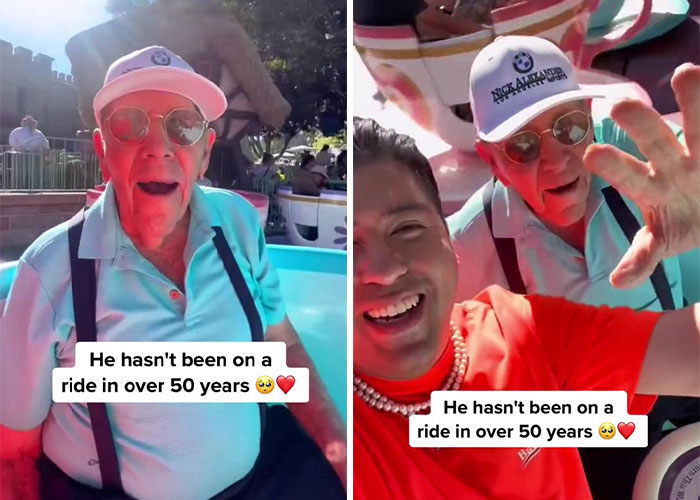 At the end of the video, the man told Isaiah how much it meant to him to get this opportunity. “This is one of the best days of my life,” he said. “I thought my life was over for a long time. You don’t know how much I appreciate this,” he added, getting emotional, with tears filling his eyes.

“I thought my life was over” hits right in the feels. My own grandma is 86 years old and she often mentions the end of her life, but it’s not the end just because you’re at a beautifully ripe age! Extra note: Send your best wishes to my nana in the comments below if you wish; I’ll let her know! 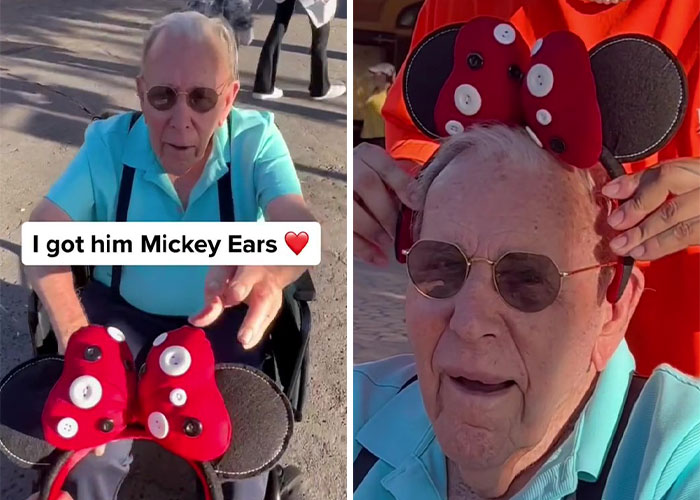 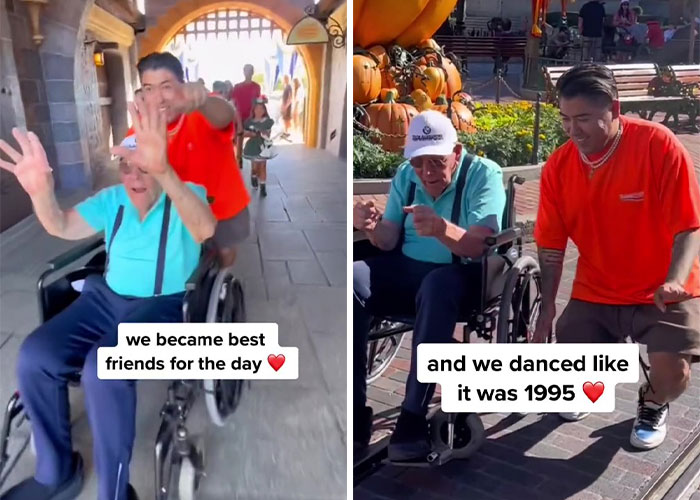 Just because you reach a certain milestone, doesn’t mean that you have to stop living. Each day is a blessing waiting for you; whether you just watch your favorite show on TV or go explore Disneyland, there’s always something to be grateful for. Something to look forward to. Something to be excited about.

And yet, we as humans seem to push back our desires, our curiosity, and our taste for life’s different flavors the more we age, telling ourselves that we’re ‘too old’ for something. Are we, though?

“This is one of the best days of my life,” said the 100-year-old veteran. “I thought my life was over for a long time. You don’t know how much I appreciate this” 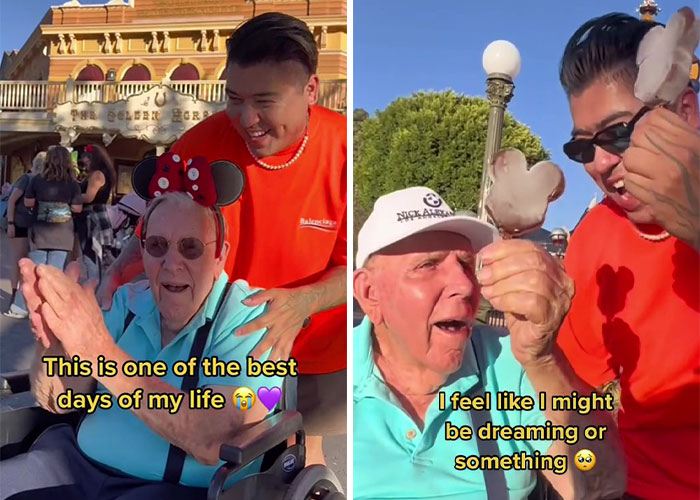 As Alfred James of the Pocket Mindfulness blog states, “People die before they reach 10 years old, before they reach their 20s, in their 30s and 40s. It’s tragic. You are still here.” And while you’re still here, you have the opportunity to do as you wish, so go after your dreams, and eat that ice cream that you’ve been daydreaming of!

When we hit midlife and beyond, we’re suddenly “too old” to do anything—get a degree, start a new career, find love, write a novel, become a professional athlete. Yet people in their 50s, 60s, 70s and beyond do those things and much more all the time! Vicki Larson believes that most of the time we’re our own worst enemy, internalizing a lifetime’s worth of cultural narratives about what getting older is about. 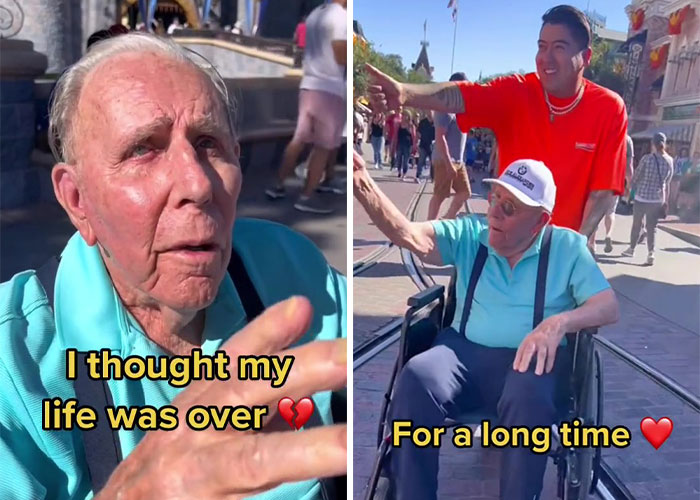 It’s all about perception. “The only time it is too late to do anything is when you’re physically not here anymore. Until then, don’t waste this only chance at life that you have,” says the Get Busy Living blogger.

However, it’s never as simple as just deciding to start taking life by the horns again. Researchers at Malmö University, Sweden, have described an acute sense of existential loneliness in very old age, which is in part a reflection of all combined loss and grief throughout one’s life. The study argued that it can be understood as if the older person “is in a process of letting go of life.”

Just because you reach a certain milestone, doesn’t mean that you have to stop living. Each day is a blessing waiting for you, no matter how small or simple 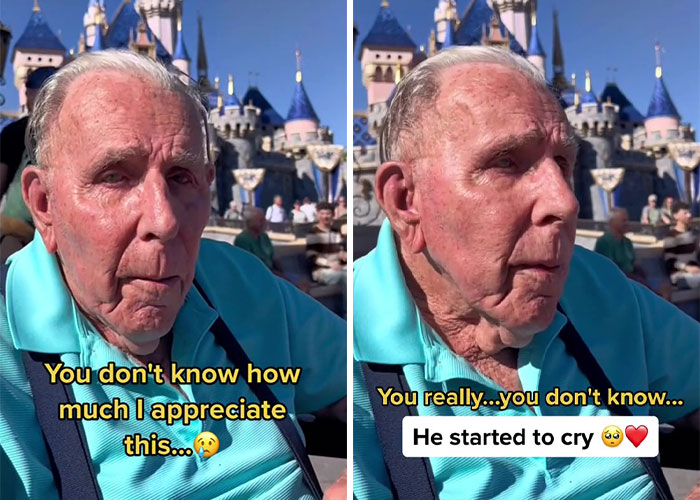 This means that new connections need to be made in order for one to reconnect with the seemingly distant world, to believe once again that life isn’t all about loss, but also discovery—and that they’re still very much capable of the latter. Daydreaming is not just for the youth; one can believe in magic at any age!

Isaiah didn’t have an easy start in life. He was homeless multiple times, sleeping in abandoned office buildings and his car, but he believed that better was coming 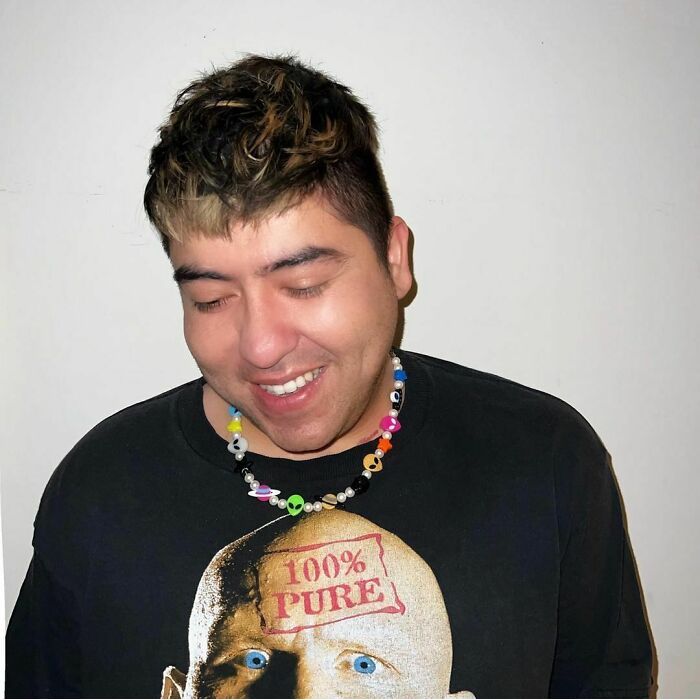 Isaiah didn’t have an easy start to his career, but he believed that the future would be bright for him. He told his story on The 247, writing: “When I started out five years ago I had no money whatsoever. I was homeless multiple times.”

“I was sleeping in abandoned office buildings, sleeping in my car. There were times that I was really, really hungry and I had nothing, so I know what that’s like.”

He got his big break when Rihanna modeled his handmade jewelry for a friend’s photoshoot; the rest is history. He continues to use his online platform for good 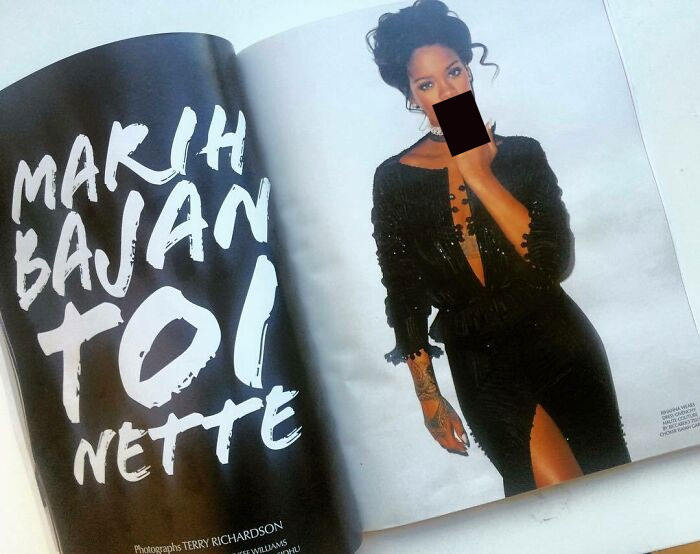 The student at the Fashion Institute of Design & Merchandising (FIDM) finally got his big break when a friend of his gave him a chance. He was working on a photo shoot with Rihanna, and Isaiah offered them some of his handmade jewelry to use for styling.

“Rihanna wore my jewelry on the cover of a French fashion magazine, and when the cover was released, my entire inventory immediately sold out. One image = Life changed.” 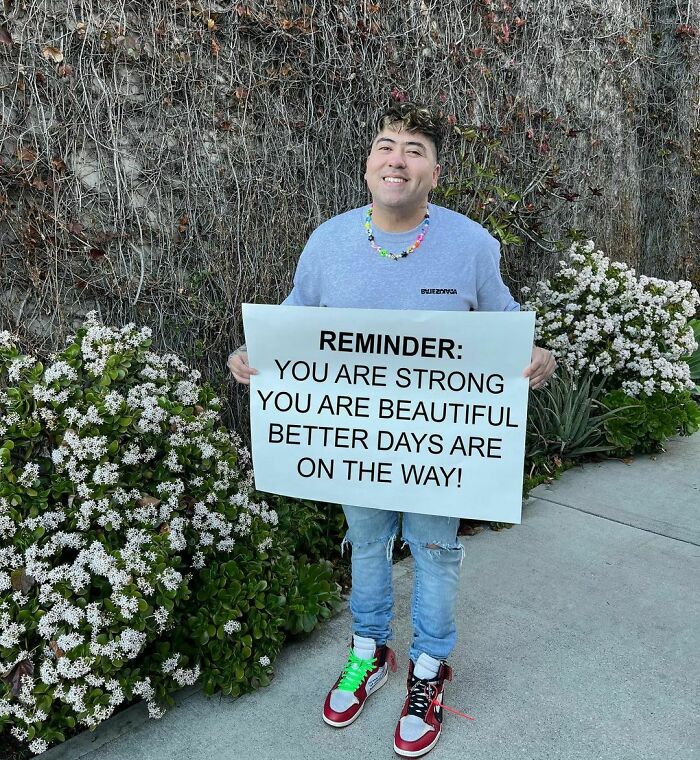 “I would have never been able to predict that one day Justin Bieber would be wearing a piece of my jewelry on stage, or that I’d have clients like Cardi B and Chance the Rapper.” He never stopped believing and leading with kindness: “as long as your heart is always in the right place, things will work out for you.”

It’s clear that he’s continued to lead his life by the same principle, with many of his videos going viral for changing the lives of the less fortunate or struggling. “I’m just really, really obsessed with creating content. But that’s because I’ve seen several times now how one piece of content can alter the course of someone’s life,” he said.

“As long as your heart is always in the right place, things will work out for you,” he said. We wish him and the 100-year-old gentleman all the best! 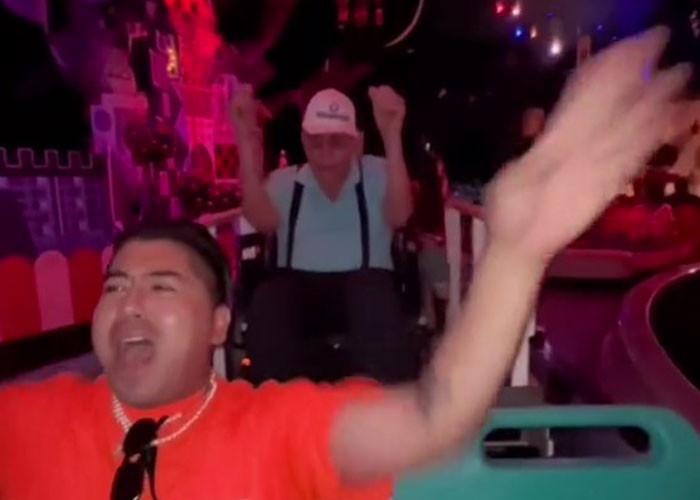 “To someone who is struggling, even a little help and positivity can be incredibly meaningful. All of us have the ability to make the world a better place,” Isaiah believes. It seems to be so! Think of any person in your life (it can even be yourself) whose day you could make better by just giving them a call, maybe a compliment, or inviting them for coffee.

You can watch the full video of their special day here

We wish Isaiah and the 100-year-old gentleman all the best in their journey through life and hope that this will inspire them both for years to come. Let us know your thoughts in the comments below, and I wish you the best day—go do something you love!

People have been cursing at the onion ninjas and expressing their love for the pair. Let us know your thoughts in the comments below! 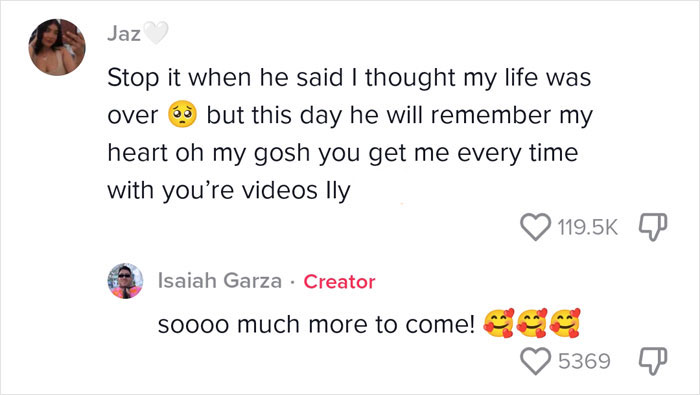 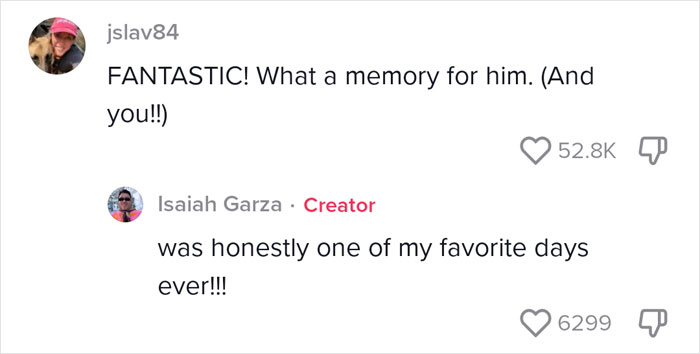 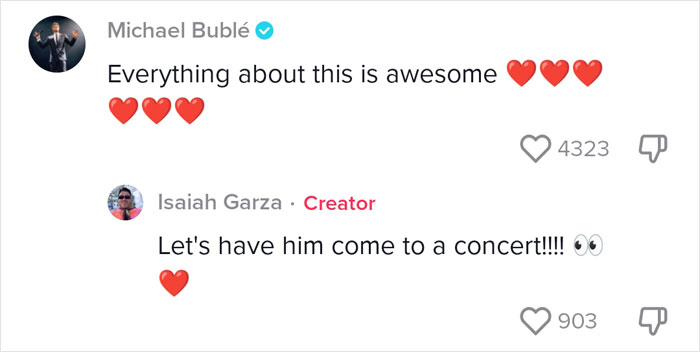 The post Young Man Asks 100-Year-Old Veteran To Go To Disneyland With Him first appeared on Bored Panda.

New Abarth EV Plays a Guitar Riff When You Accelerate

An iPhone Case Inspired by the Ferrari Modulo

Employee Takes Documents That They Created For Their Employer After Quitting, Receives Mixed Reactions Online